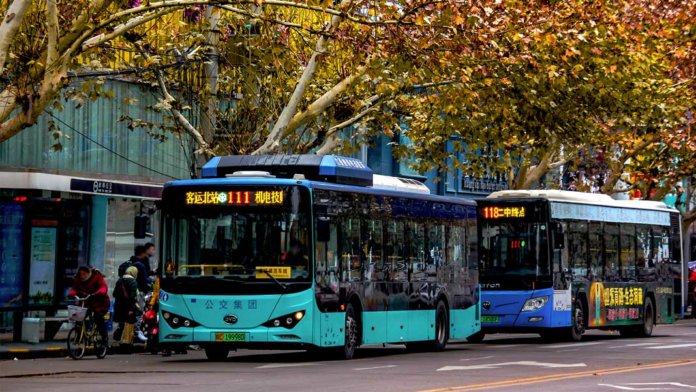 Tesla and other electric cars are great for the environment. However, they pale in comparison to electric buses. According to a report from Bloomberg New Energy Finance (BNEF), electric buses will save an astounding 270,000 barrels of diesel demand in 2019—every single day. The vast majority of electric buses are found in China, where many mega-cities are closing in on 100 percent electric-powered public transport.

However, while the report points to promising things to come, there is a bit of small print to cover.

Buses play a pivotal role in public transport around the world. Their size and constant use mean that 1,000 electric buses, according to BNEF calculations, displace 500 barrels of diesel demand each day. For comparison, 1,000 electric cars displace 15 barrels of oil demand a day. Today, there are reportedly close to 400,000 electric buses in operation, 99 percent of them in China.

The Chinese government has made a concerted effort to promote electric vehicles. One of its main goals is lowering the country’s debilitating air pollution, thought to be responsible for a staggering 1.6 million premature deaths a year. The efforts have included direct and indirect subsidies; calculations by Quartz show that Shenzhen-based vehicle manufacturer Build Your Dreams (BYD) received around $1 billion in subsidies toward its electric vehicles in 2016.

While the economic pros and cons of the approach can be discussed (parts of the industry are now struggling, as the government is cutting back on subsidies), China is easily the world’s largest market for electric vehicles, seeing sales of 1.2 million battery and hybrid vehicles in 2018 (US sales for 2018 were around 361,000).

Shenzhen, a fast-growing megacity with 12 million inhabitants, is the vanguard of electric buses, with a fleet of 16,000 of them. More than 30 Chinese cities have plans to reach 100 percent electrified public transit by 2020.

The quick conclusion, backed up by my elementary school math, is that electric buses are a boon. By the end of 2019, electric buses will have saved 270,000 x 365 = 98.55 million barrels of diesel. A fuel barrel is 42 US gallons, so total diesel savings come in around 4.139 billion gallons. According to the EPA, each gallon of diesel burned emits 10,180 grams (just over 10 kilos) of CO2. So the buses equal a saving of more than 42 million tons of CO2.

However, these figures don’t represent the full story. The electricity to power the buses has to come from somewhere. In the case of China, that often involves one of the worst CO2 culprits of all: coal. The production costs, both economic and in terms of energy, of electric vehicles also tend to be higher, in part because of their battery systems.

Furthermore, we’re still unsure what to do with the batteries once they need to be recycled. In short, how much greener an electric vehicle is compared to a diesel-powered one depends on a multitude of factors. While it’s difficult to generalize, figures from Germany show that a medium-sized electric car needs to clock 125,000 kilometers to break even on emissions with a diesel car. Other calculations put the number much lower.

But studies show electric vehicles are far more energy efficient (converting energy to propulsion) and that their cradle-to-grave environmental impact is smaller. Furthermore, emissions from exhaust pipes of conventional vehicles have huge health impacts compared to those of electric vehicles.

While China is solidly in the lead, other countries are looking to catch up.

Apart from the health benefits and lower emissions, countries are also looking to electric vehicles because the future of energy looks set to become increasingly renewables-based. China is a good example, as it is investing heavily in wind energy. It leads to the question of what to do with excess electricity production when demand is low, such as at night.

Electric buses provide an excellent, partial answer. As they run during the day and charge at night, the buses can contribute to stabilizing the energy grid. They could also provide a cheap way of seriously boosting energy storage capacity.

However, while electric buses work well in Shenzhen, a city where moles could be likely suspects for some of the biggest hills when compared to neighboring Hong Kong, they’re not necessarily suited for more undulating urban environments—at least not yet.

The growing range of electric vehicles indicates this could soon change, though. It could be argued that compared to their fossil fueled cousins, electric vehicles have only in recent years started to see serious research and development budgets and feel the advantages of major production lines.

Both of these factors indicate that electric vehicles are going to become more powerful and have greater range, and that the economic and environmental impact of producing them is going to fall. This makes investing in more of them an increasingly attractive proposition.