This Cool Artificial Reef Was Just Deployed in Sydney Harbor 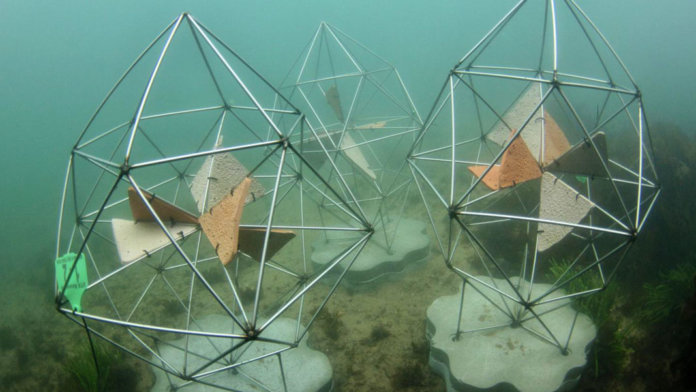 Earth’s oceans have seen better days. They’re inundated with plastic waste, both whole single-use plastics and tons of plastic microparticles that find their way back into our food and drinking water. Their water temperatures are rising due to climate change, causing coral bleaching and other harmful phenomena. Overfishing has depleted multiple marine species.

Organizations and individuals around the world have leaped to action to try to reverse some of the damage human activity has caused the oceans. The Ocean Cleanup is using a two-kilometer-long screen to collect plastic waste. Origin Materials aims to make a new type of plastic that’s sustainable and renewable. The 5 Gyres Institute’s mission is to end plastic pollution, which it calls a global health crisis.

Last week another effort joined the ranks: a purpose-built artificial reef in Sydney Harbor. The result of a three-year partnership between the University of Technology Sydney (UTS), the Sydney Opera House, and the government of New South Wales, the reef was made by Reef Design Lab and consists of eight one-meter-tall pods, each containing three steel and concrete hexagonal structures. Half the units also have triangular tiles extending from the hexagons’ cores.

The reef was installed along the sea wall of Sydney’s world-famous Opera House. Over a thousand miles north sits the Great Barrier Reef; larger than Italy and half the size of Texas, it’s the world’s largest coral reef system, and it’s struggling. After mass bleachings caused by unusually warm water in 2016-2017, scientists found an 89 percent reduction in new coral growth.

Bleached coral doesn’t mean dead coral. Warm temperatures cause coral to eject the algae that live in their tissue, hence the change from colored to white. It’s possible for coral to recover, but it usually takes up to ten years—and that’s if no further bleaching occurs. Reefs in the Caribbean have also been affected in recent years. As in any ecosystem, cutting out one link reverberates up the food chain and impacts other species; in this case, the diversity of the fish populations near affected reefs drops, as does the reef’s overall ability to carry out the functions necessary for it to survive and thrive.

The hope for the artificial reef in Sydney is for sea life to take up residence within its structures, thus encouraging and hopefully restoring some of the area’s biodiversity.

“It’s amazing, after only a few weeks the pods are already attracting the interest of the types of species we hope will be drawn to this new habitat such as leatherjackets, bream and octopus,” said UTS Professor of Marine Ecology David Booth, who led the project. “We will continue to monitor the reefs and adjacent sites to document change and how effective adding small fish habitat structures is in enhancing fish life on seawalls. We hope it is a model for other cities on harbors.”

Artificial reefs aren’t a new concept by any means, and in fact, many of them around the world are far larger than Sydney Harbor’s—picture a decommissioned oil rig, aircraft carrier, or ship sunk to the bottom of the ocean becoming a teeming hub of marine life.

Where does the teeming marine life originate from, though? There’s been some debate about the effectiveness of artificial reefs at actually growing fish populations, rather than simply attracting them to a new location from the surrounding area. One study by marine scientists found a modest increase of 6.5 kilograms of fish per 10 square meters of artificial reef.

Artificial reefs also aren’t doing much to solve the larger global problems of ocean contamination and rising water temperatures (and they’re not meant to). While any effort to help the environment should be applauded, it’s crucial that we focus as much (or preferably more) on preventive solutions—such as cutting carbon emissions or reducing plastic waste—as we do on reactive ones.

In the meantime, we’ll see how the marine life in Sydney Harbor fares with its newly-provided living option.