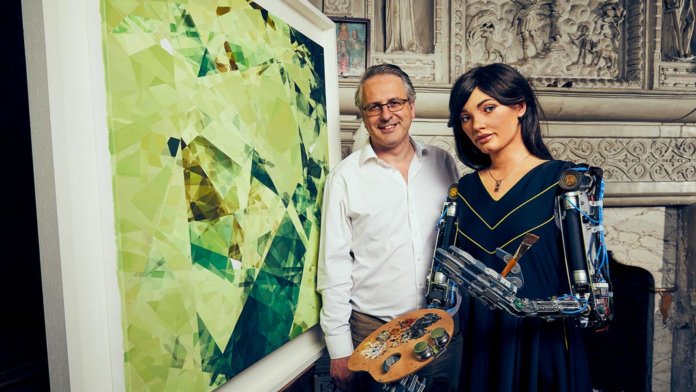 Artificially intelligent systems are slowly taking over tasks previously done by humans, and many processes involving repetitive, simple movements have already been fully automated. In the meantime, humans continue to be superior when it comes to abstract and creative tasks.

However, it seems like even when it comes to creativity, we’re now being challenged by our own creations.

In the last few years, we’ve seen the emergence of hundreds of “AI artists.” These complex algorithms are creating unique (and sometimes eerie) works of art. They’re generating stunning visuals, profound poetry, transcendent music, and even realistic movie scripts. The works of these AI artists are raising questions about the nature of art and the role of human creativity in future societies.

Here are a few works of art created by non-human entities.

Earlier this month we saw the announcement of Ai.Da, considered the first ultra-realistic drawing robot artist. Her mechanical abilities, combined with AI-based algorithms, allow her to draw, paint, and even sculpt. She is able to draw people using her artificial eye and a pencil in her hand. Ai.Da’s artwork and first solo exhibition, Unsecured Futures, will be showcased at Oxford University in July.

Obviously Ai.Da has no true consciousness, thoughts, or feelings. Despite that, the (human) organizers of the exhibition believe that Ai.Da serves as a basis for crucial conversations about the ethics of emerging technologies. The exhibition will serve as a stimulant for engaging with critical questions about what kind of future we ought to create via such technologies.

The exhibition’s creators wrote, “Humans are confident in their position as the most powerful species on the planet, but how far do we actually want to take this power? To a Brave New World (Nightmare)? And if we use new technologies to enhance the power of the few, we had better start safeguarding the future of the many.”

Our transcendence adorns,
That society of the stars seem to be the secret.

The two lines of poetry above aren’t like any poetry you’ve come across before. They are generated by an algorithm that was trained via deep learning neural networks trained on 20 million words of 19th-century poetry.

Google’s latest art project, named PoemPortraits, takes a word of your suggestion and generates a unique poem (once again, a collaboration of man and machine). You can even add a selfie in the final “PoemPortrait.” Artist Es Devlin, the project’s creator, explains that the AI “doesn’t copy or rework existing phrases, but uses its training material to build a complex statistical model. As a result, the algorithm generates original phrases emulating the style of what it’s been trained on.”

The generated poetry can sometimes be profound, and sometimes completely meaningless.But what makes the PoemPortraits project even more interesting is that it’s a collaborative project. All of the generated lines of poetry are combined to form a consistently growing collective poem, which you can view after your lines are generated. In many ways, the final collective poem is a collaboration of people from around the world working with algorithms.

The exhibition was not simply credited to a machine, but rather attributed to the collaboration between a human and machine. Ahmed Elgammal is the founder and director of the Art and Artificial Intelligence Laboratory at Rutgers University. He considers AICAN to not only be an autonomous AI artist, but also a collaborator for artistic endeavors.

How did AICAN create these eerie faceless portraits? The system was presented with 100,000 photos of Western art from over five centuries, allowing it to learn the aesthetics of art via machine learning. It then drew from this historical knowledge and the mandate to create something new to create an artwork without human intervention.

Listen to the score above. While you do, reflect on the fact that it was generated by an AI.

AIVA is an AI that composes soundtrack music for movies, commercials, games, and trailers. Its creative works span a wide range of emotions and moods. The scores it generates are indistinguishable from those created by the most talented human composers.

The AIVA music engine allows users to generate original scores in multiple ways. One is to  upload an existing human-generated score and select the temp track to base the composition process on. Another method involves using preset algorithms to compose music in pre-defined styles, including everything from classical to Middle Eastern.

Currently, the platform is promoted as an opportunity for filmmakers and producers. But in the future, perhaps every individual will have personalized music generated for them based on their interests, tastes, and evolving moods. We already have algorithms on streaming websites recommending novel music to us based on our interests and history. Soon, algorithms may be used to generate music and other works of art that are tailored to impact our unique psyches.

The Future of Art: Pushing Our Creative Limitations

These works of art are just a glimpse into the breadth of the creative works being generated by algorithms and machines. Many of us will rightly fear these developments. We have to ask ourselves what our role will be in an era where machines are able to perform what we consider complex, abstract, creative tasks. The implications on the future of work, education, and human societies are profound.

At the same time, some of these works demonstrate that AI artists may not necessarily represent a threat to human artists, but rather an opportunity for us to push our creative boundaries. The most exciting artistic creations involve collaborations between humans and machines.

We have always used our technological scaffolding to push ourselves beyond our biological limitations. We use the telescope to extend our line of sight, planes to fly, and smartphones to connect with others. Our machines are not always working against us, but rather working as an extension of our minds. Similarly, we could use our machines to expand on our creativity and push the boundaries of art.