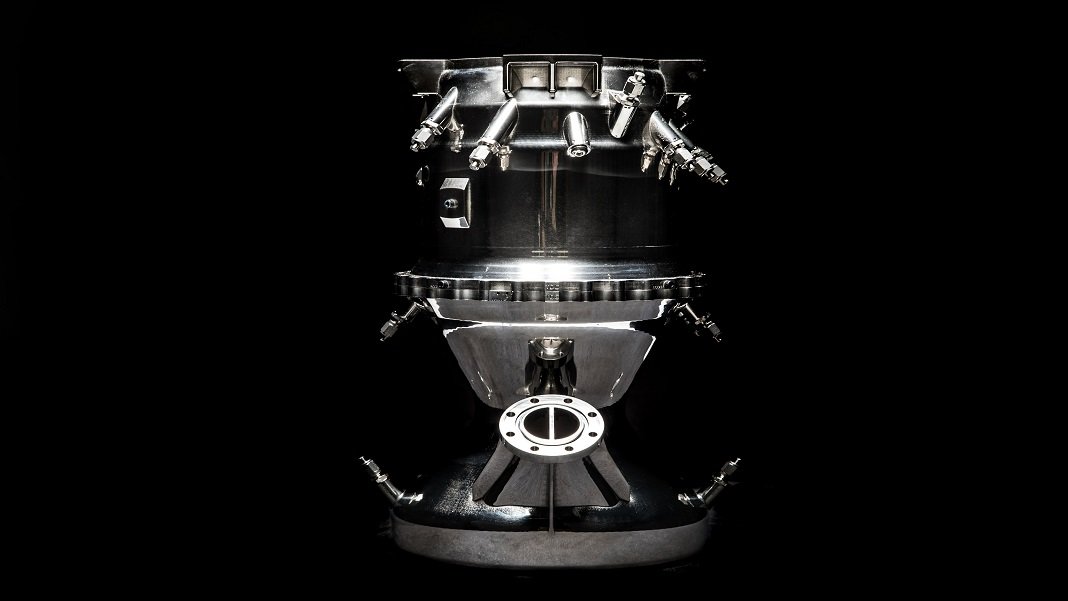 There’s a startup in California with dreams of enhancing the future of space travel, and they have their very own Stargate.

Not the teleportation portal from science fiction, of course. The Stargate owned by Relativity Space, which just announced a new funding round of $140 million in October, is arguably the largest metal 3D printing device in the world. Which makes sense: after all, you need something pretty ambitious if your aim is to 3D print rockets capable of carrying over a ton of payload into space.

The founders of Relativity Space, which include former employees of Blue Origin and SpaceX, felt that the aerospace industry hadn’t made sufficient use of new additive manufacturing technologies. The CEO and co-founder, Tim Ellis, thinks 3D printing can almost entirely automate the production of rockets and give the company an edge in an increasingly crowded market. “Other companies, by our estimates, are 3D printing less than 1 percent of their parts, and we’re looking at achieving 95 percent by the end of 2020,” he said. Only those components which can’t be 3D printed, such as the circuitry, are traditionally manufactured.

One of the key advantages, if this can be achieved, is reducing the time it takes to produce new rockets and new rocket designs. Currently, it takes 12-18 months to build a new rocket from scratch in a process that often involves assembling over 100,000 components, often from very diverse supply chains. Relativity Space hopes to reduce the lead-time to two months, allowing them to iteratively produce better designs, and create tailor-made rockets for all manner of applications.

Ideally, in a world of fully-automated additive manufacturing, testing out a new design is as simple as sending a design template to the printer. It allows the company to explore more innovative designs in terms of geometry and topology rather than relying on existing templates. This could be crucial in rocket design, where weight is at a premium.

Speeding up the process of manufacturing launch vehicles can prevent new satellites or experiments from having to wait months or years to reach low Earth orbit, which is a substantial bottleneck in the commercial exploitation of space. It’s also necessary, as some creativity in the manufacturing process is required when 3D printing complex objects, ensuring that you use as few components as possible, perhaps 100 times fewer than a conventional rocket. The Aeon engines developed by Relativity Space, which are currently being tested at the Stennis Space Center in Mississippi, use only 100 components.

Moreover, Relativity Space, which has put a lot of faith in training its 3D printer using machine learning, is hoping to automate as much of the design and construction process as possible. As the Stargate device operates, the floods of raw data from its sensors are compared with the idealized component design, training neural networks that aim to reduce the rate of faults in manufacture.

But Relativity Space isn’t shy about its dreams regarding how it can be used in the future. Perhaps such a self-containing system could manufacture rockets anywhere—and they do mean anywhere. “To print stuff on Mars you need a system that can adapt to very uncertain conditions,” Ellis said to WIRED. “So we’re building an algorithm framework that we think will actually be transferable to printing on other planets.”

The printing process for the Stargate essentially entails melting a gigantic spool of aluminium wire as it passes through the head of the device. This molten metal is then deposited in layers onto a surface, which is kept clean with a constant stream of gas from the arm’s tip. Other components are manufactured using metal laser welding, where metal dust is melted and welded together with extreme precision using a laser.

As the 3D printing process gets successively better, new iterations of the Stargate, doubling in size, are constructing larger and more complicated parts for Relativity Space’s first rocket, the Terran-1. The real test and proof of concept for the Relativity Space idea will arise when the first full rocket is assembled. The company is aiming to launch the first test flight by 2021, and say that the new funding round will keep them in business until the first full prototype is complete.

They’re not likely to be short of reasons for launch, with dozens of companies looking to exploit low Earth orbit, launching constellations of satellites in the years to come—for which the small-launch vehicles they aim to manufacture will be ideal.

However, this is a crowded marketplace. There are over 100 startups targeting the small-satellite market, with only one so far successful in launching a commercial payload to orbit. Indeed, the announcement of this new round of funding came with an admission that the schedule for Terran-1’s first launch would have to be pushed back, from 2020 to 2021. Bright ideas and enthusiasm, as well as some venture capital funding, are not guaranteed to lead to success.

Only a year ago, Vector, another startup targeting the same satellite-launch market, was riding high on a new $70 million funding round, even winning a contract from the US Navy. Now the company has suspended operations, laid off its workers, and appears on the brink of financial collapse, leading some to speculate the market is already overcrowded.

There is an argument that attempting to 3D print almost the entire rocket may well be overkill, while other startups use 3D printing only for a few niche components. While 3D printing small and complex components is usually a net benefit, 3D printing massive metal tanks may be slower and more expensive than traditional manufacturing.

Others will point to the titans of the industry (SpaceX arguably the most prominent) and suggest that they may already be too far ahead of the competition to be caught. Will small, bespoke rocket launches really be necessary in the space industry of the future? If super-heavy lift launch vehicles are regularly being launched in the 2020s or 2030s, those aiming to lift a satellite or two into space may well just hitch a ride on one of these regular launches, rather than seeking to have their own rocket built.

This might not concern Relativity Space all that much. They have already secured contracts with four satellite companies to help them launch. What’s more, even if they fail in capturing a large slice of that rocket market, making the world’s largest 3D printer is likely to be of benefit to other industries, like aerospace or vehicle manufacturing. This alone may well be worth the high value that venture capital sees for the business. After all, even if it doesn’t quite make it into low Earth orbit by 2021, 3D printing isn’t going anywhere.