SpaceX’s Starlink Launch and the Race for Global Internet Coverage 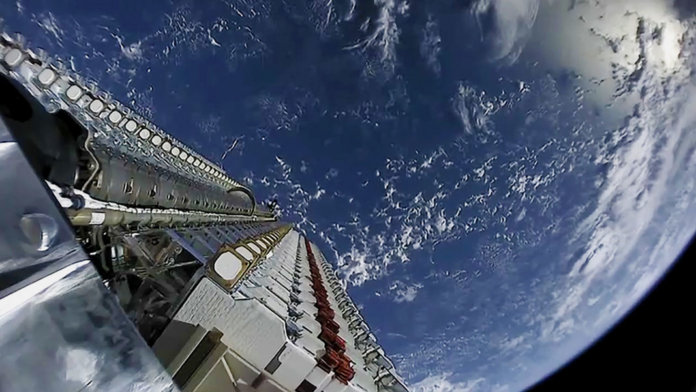 I saw two shooting stars last night
I wished on them, but they were only satellites
it’s wrong to wish on space hardware.
– Billy Bragg

There’s a mini-constellation of new satellites in the sky. SpaceX has launched the first wave of its planned Starlink fleet into low earth orbit. The sixty satellites, weighing 13.6 tons in total, were deposited 400km above the Earth’s surface by a Falcon 9 rocket. They joined two early experimental Starlink satellites that were launched in 2018—and an increasingly crowded region of space.

The aim of the project is often stated as providing internet to the next four billion users, which represents a massive potential marketplace and a considerable revenue stream for SpaceX. Yet lucrative specialist services may be possible as well. Much will depend on how the system actually operates in practice, but as light travels faster through the vacuum of space than through fiber-optic cables, it’s feasible that the satellites could provide faster links between cities.

The 500 satellites currently in low-Earth orbit could ultimately be dwarfed by Starlink: when complete, it could consist of 12,000 satellites in total. To avoid contributing to the growing space junk problem, and so the satellites can regularly be upgraded and replaced, they are planned to burn up in Earth’s atmosphere after around five years of use.

The Global Internet Race Heats Up

SpaceX is far from the only company looking to reap the potentially vast rewards from selling internet access to the next few billion users; when you see how fierce the race is and look at the competitors involved, there’s no wonder Musk is in a rush. Amazon’s Project Kuiper exists mostly on paper—they haven’t decided whether to buy third-party satellites or build their own—but also aims to launch 3,300 internet-providing satellites in coming decades.

Facebook’s Athena internet satellite, quietly licenced by the FCC through a stealthy subsidiary company called PointView Tech LLC, claims that it will use millimeter-wave radio signals to provide speeds of up to 10 gigabytes per second, ten times faster than those touted by Starlink. However, these mm-wave radio signals may suffer from their own problems; this high-frequency radiation can be absorbed by raindrops or aerosols in the atmosphere. A large part of Athena’s initial mission will be to determine whether these problems are insurmountable, and how they might be addressed—yet, ultimately, providing global coverage would require thousands of satellites in low-Earth orbit.

This is far from Facebook’s first attempt to provide global internet coverage with innovative technology. Its Aquila drone project, which aimed to use solar-powered drones flying high in the stratosphere to provide internet access to the surface below, has been sidelined after one of the drones crashed during a test flight. However, Facebook has recently restarted testing drones built by Airbus and even filed a patent for a drone that would stay aloft using kites.

Meanwhile, Google’s Project Loon, delivering internet access via stratospheric balloons, is probably the most developed of the next-generation internet projects. Since its origins in Google’s Moonshot Factory in 2011, Project Loon has completed prototype and testing phases, and now aims to become commercially viable by partnering with telecoms companies in Kenya to provide internet access, alongside selling some of the proprietary software that helps it to control the moving network of balloons to competitors. This includes a recently-announced collaboration with Softbank, no strangers to investing heavily in new technologies, who are developing their own solar-powered drone to provide internet access.

Broadly speaking, while the satellite-based projects face steeper initial costs and require longer to deploy, they might provide more consistent global coverage with longer lifetimes. High-altitude platform stations (HAPS) like the solar-powered drones or the stratospheric balloons will cover smaller regions and have shorter lifetimes (Google’s balloons can stay aloft for around half a year at a time, while if battery life and solar recharging improve, Facebook’s drones aimed for continuous flight of up to three months), but can be deployed much more cheaply and flexibly. It remains to be seen which of these business models will ultimately prove the most profitable.

The benefits of internet access are undeniable. The internet has proved a great leveller, providing access to near-boundless information and the ability to instantaneously communicate with others, leading to the greatest information revolution and societal reorganization since the printing press. The fact that billions have patchy access or no access at all is one of the burning injustices of our global society. Lives could be saved by this communications network; economic and social advances could be accelerated.

But big tech companies are not engaged in this business purely out of the kindness of their hearts. Controlling the flow of information to the next few billion people means power and profits, and goes beyond selling people internet access.

In the new world of surveillance capitalism, every stream of data on every individual is digital gold, enabling behaviors to be influenced and advertising to be sold. Facebook’s Internet.org project was an initial, clumsy attempt at reaping this harvest, providing a limited internet that collected users’ data while directing them to Facebook’s own website and a small selection of companies that paid for the privilege. The project, banned in India and under fire elsewhere, has been increasingly sidelined.

The sheer scale of the infrastructure for these projects has also caused a great deal of concern. For a start, the amount of debris raining down on Earth from the decay of 12,000 satellites has, by some estimates, a 45 percent chance of killing or injuring someone, not to mention causing property damage. (SpaceX has recently responded to this, claiming to have redesigned the satellite so that no components large enough to cause injury will survive re-entry.)

Meanwhile, as the first Starlink satellites were seen by excited observers, others raised questions. According to one astronomer’s calculations, up to 500 satellites could be visible from the ground at any one time—potentially outnumbering the visible stars in the sky. If Starlink and its competitors all succeed in launching their own new constellations, they may well drown out those constellations we’re familiar with. Humanity has already left its mark on Earth, with accelerating destruction of the biosphere and influence over the land. Our fingerprints on space are growing in number.

Alongside wreaking havoc with ground-based astronomy—which still represents the overwhelming majority of astronomy, given the expense and difficulty of maintaining space telescopes—it’s hard to comprehend the psychological impact this would have. The night sky has been a source of fascination for humanity since we first evolved. When we discovered how impossibly far away the stars were, what they were made of, and that they made us in their collisions and in supernovae, that tableau of the night sky took on all the more meaning. This may now be changed forever without anyone’s consent.

Even as the internet provides a revolutionary and low-cost source of information and communications infrastructure that could potentially benefit billions, it can also be a source of misinformation and rumor. Tech companies, who stand to profit from harvesting user data and selling advertising, are racing to become the gatekeepers for the next few billion users in a new digital gold rush. As this race unfolds, exciting as it may be to watch, it’s hard not to feel a little unease. Will the internet for the next few billion users look anything like the internet we have known? And who will benefit most from its expansion?