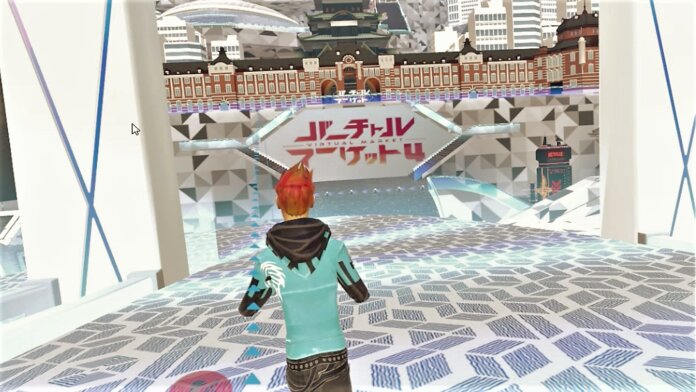 It’s one of the most under-appreciated science fiction films of the past decade, but Luc Besson’s Valerian and the City of a Thousand Planets (also the most expensive independent film ever made) subtly depicts a compelling vision for the way tools like augmented and virtual reality devices may intersect with the future of online shopping.

The scene takes place in Big Market, a massive inter-dimensional marketplace consisting of more than a million shops. In reality, it’s located in a giant empty desert, but it can be accessed by visiting shoppers through their head-worn AR glasses. Take a look for yourself.

Aside from showcasing how augmented reality can transform our relationship to physical land in unpredictable ways, even barren desert landscapes, it showcases what an almost fully “online” shopping experience might be like if you could physically walk through it in three-dimensional space.

While we’re far from a Big Market existing in the real world, I’ve just experienced what is perhaps its closest precursor entirely in virtual reality using my own Oculus Rift headset at home. It’s called Virtual Market, and right now the fourth edition is currently underway in VRChat, one of the most-used social VR applications today.

Virtual Market 4, or V-Ket 4 for short, is a Japanese expo that spans 36 separate worlds contained within the VRChat ecosystem. Its primary purpose is to sell virtual apparel and avatars, like if shopping for a new “skin” in Fortnite took place inside a sprawling virtual mall. Given the scale of the event, it’s also drawn the attention from big brands to create an almost CES-like feel.

For those who don’t know what VRChat is, think of it like a modern Second Life, full of user-built online virtual spaces. To date, VRChat is by far the most popular and used social VR application, which had millions of downloads and tens of thousands of concurrent users at its peak in 2018 and is now seeing even more growth during the pandemic.

In early 2018, a collection of popular twitch streamers began broadcasting as avatars from inside VRChat to their thousands of viewers. To get a sense, one notable example involved two beloved twitch celebrities who staged a sort of ongoing reality show culminating in a mock wedding in front of their fans. As a result, and aside from games like Beat Saber and Half-Life Alyx, VRChat became the closest thing to a “killer app” the VR industry has ever seen. VRChat is now carrying the baton handed off by Second Life toward realizing some of the vision of a true online “Metaverse.”

In concept, V-Ket 4 is one of the more remarkable activities I’ve seen during my time writing about VR, but in practice we’re clearly far off from a truly rich social experience in VR.

The most astonishing aspect is the scope and scale of the event. According to the official press release, V-Ket 3 hosted more than 710,000 people, and this time more than a million visitors are expected to participate over the course of 10 days (making it the largest social VR gathering ever). 40 companies, many of them well-known multinationals including Audi, Netflix, Panasonic, and Sega, will be exhibitors as well. Presumably (and I was unable to contact a press representative at the time of writing), the majority of these visitors will be from Asia. I also do not know the number of people who will attend in 2D, since VRChat also works on desktop without a VR device.

As Kent Bye, a popular VR podcaster, points out as well, V-Ket displays some of the most complex and intricate virtual world architecture you will find anywhere in social VR.

V-Ket 4 kicked off at 7pm San Francisco time the evening of Tuesday April 28 (11am Wednesday in Tokyo), and will run for ten days. At the start of the event, I was ready to spawn into “Parareal Tokyo,” the flagship virtual world made to imitate the real streets of Japan’s capital. I noticed on the dashboard that more than 2,000 people were already in the space—but since each instance of the world is capped at 30 users, there were more than 65 copied versions of Parareal Tokyo running at once.

My avatar was immediately placed in the lobby of a traditional-looking conference center with a massive SoftBank booth like you might see at CES. I followed a ramp out into a sprawling urban landscape with multimedia billboards and blimps displaying ads for Audi vehicles and other brands. I saw a booth for Netflix, and before my connection fell apart I was able to stumble into a fully-simulated 7-Eleven convenience store with a few avatars for sale on display. I couldn’t hear any of the other users speaking, and there were only 30 of us scattered across such a large space; for being such a massive event, it felt eerily quiet and lonely.

Admittedly my connection was terrible, the space wouldn’t easily render, and the lag became so unbearable that I eventually gave up and searched for “Virtual Market 4” on twitch and spent the next few hours watching a 25-year-old streamer named SciFri (with a far more enviable internet connection) wander around V-Ket with his friends. This approach had its unique flavor of entertainment value and it was nice to cook my real-world dinner while outsourcing the exploration of V-Ket to SciFri and his friends.

Later I found some great English-language live coverage of the event here.

What We Can Expect in the Future

The concept of spending time in online virtual spaces has certainly become more mainstream in recent years. The most iconic anecdote in recent memory was Marshmello’s 10-minute performance inside Fortnite last year, attended by over 10 million people. Last weekend, Fortnite went further by producing a Travis Scott concert series seen by just shy of 28 million. And given the ongoing pandemic where we’re spending even the most mundane parts of our day online, the idea that we’ll someday socialize, shop, play, and even work inside some form of digital environment is becoming a far more recognizable development of our modern era.

Today’s biggest limitation to social VR experiences is the limited technology to facilitate a truly connected experience. It’s challenging to convey nuanced emotions and behavioral cues beyond body language, positioning, and voice, although each platform has its own unique way of addressing the challenge. Additionally, high numbers of users extend beyond the capacity of today’s servers, meaning there’s no way to create the truly large-scale gathering you might find at a real-world event. For example, this time Fortnite limited the Travis Scott concert to 50 players per server, in contrast to the 100 players at their previous Marshmello event.

This means that social VR doesn’t yet feel like the rich experience of virtual life depicted in science fiction like Snow Crash and Ready Player One. That is coming, but it’s a ways off.

In the meantime, V-Ket 4 is one of the most stunning developments I’ve seen, and they are certainly making good on their stated mission of “developing and enriching the virtual space.” For us westerners, it’s also a reminder that development of the technologies doesn’t occur at a uniform speed across various geographies. When I visited China and Japan a few years ago, it was already clear that consumer adoption of virtual reality was far beyond what we currently see in the West.

In the coming decades, a functional Metaverse may arrive, and concepts like Big Market might really exist. In the meantime, a bizarre online expo called V-Ket 4 is the largest and most fascinating online social VR gathering in the world.

*V-Ket 4 runs until May 10th on the VRChat platform