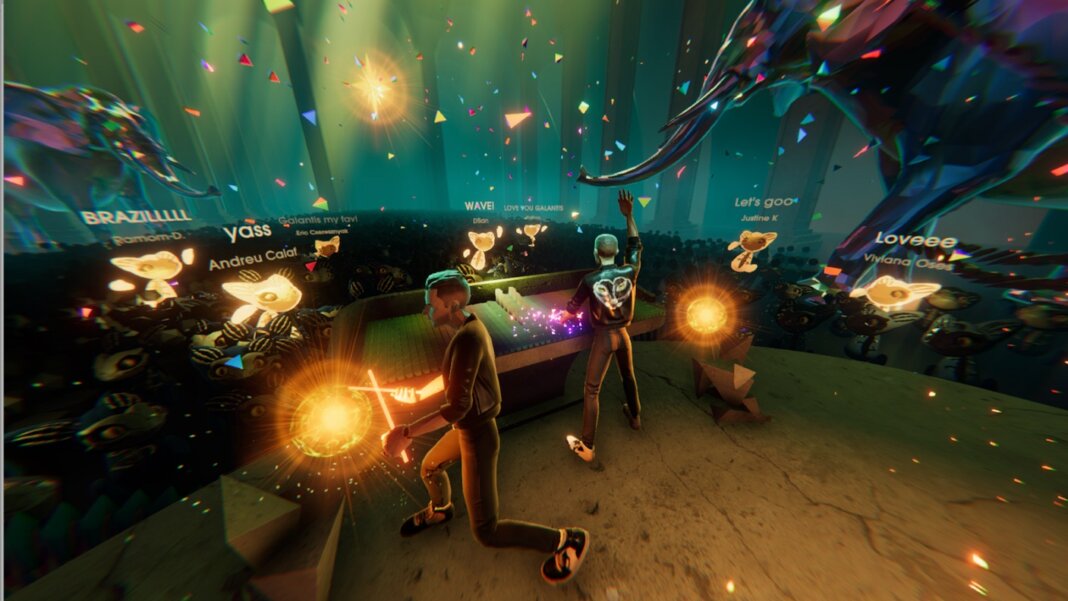 American R&B star John Legend is doing a major live show on Thursday June 25 to promote his new album, Bigger Love. But can he expect much of a crowd, given that many pandemic restrictions are still in place? More than likely, since the whole performance is taking place in virtual reality.

Legend will not be appearing in person but as an avatar via the social VR platform Wave. The show is part of an experimental live concerts series that has been taking place on the platform during the pandemic.

With other artists in the series including Tinashe, the whole idea is that they perform live in an immersive and fantastical virtual world that offers a new experience for audiences. Rapper Travis Scott did something similar inside the Fortnite video game in April and attracted over 12 million viewers.

Glastonbury, the UK’s leading music festival, is also getting in on the act, planning a virtual festival for July 3 and 4 with a VR option as a replacement for the real thing. It will feature over 50 music acts playing over several virtual stages, including Fatboy Slim and Carl Cox.

There appears to have been a significant rise in such VR offerings this year, aiming to deliver safe, accessible experiences during the pandemic. A number of visitor attractions have started to offer immersive VR experiences and access to online collections via the Google Arts & Culture app. You can go on a walking tour of the ancient temples of Sicily’s Valle dei Templi, for example. Or how about visiting a New York street art exhibition based around giant water tanks, or Hong Kong’s renowned Blue House building?

Beyond entertainment and culture, businesses have been experimenting with the likes of virtual shopping malls and estate agent property viewings in recent years. The technology was seen as a great way for helping travel agents to sell holidays, at least until coronavirus put tourism largely on hold. More immediately compelling, on the back of this year’s explosion in online meetings, is various new products to facilitate VR meetings and lectures.

Enthusiasts for this technology often frame the benefits of adding a VR dimension to an existing service in terms of the democratizing potential—making something accessible (for free) to a lot more people. Yet for any VR experience to take place, there are financial and practical constraints. Users need a fast internet connection, a headset and some kind of computer or mobile device.

This hefty outlay—along with problems with the previous generation of headsets, such as seasickness—has meant that the market for VR is still relatively small. It is estimated that there are now around 170 million VR users worldwide, with one report saying that the industry “had not lived up to its earlier expectations.”

Headset sales have fallen in 2020 due to supply issues caused by the pandemic, though many analysts view this as temporary. According to one forecast, hardware sales for VR and augmented reality will increase tenfold in the next three years. Then again, there may need to be a drop in the prices of equipment such as Oculus Quest, HTC Vive, and Playstation VR, which respectively start at around £400, £500, and £300.

There is also the issue of whether VR experiences can substitute real-life offerings. On the one hand, in the context of digital gaming and virtual worlds, VR technologies arguably empower individuals and often provide a much needed escape from the constraints of everyday life. During Covid-19, the resurgence of virtual worlds like Second Life shows how they can enable a sense of community and various social interactions, from dancing in a club to walking through a busy city.

On the other hand, VR technologies perhaps only offer a pale imitation of the multi-sensory experiences of life. VR risks removing the authenticity from cultural offerings; of turning them into little more than another commodity delivered in bundles online. It might also compound the problems with privacy and surveillance that exist with search engines and social media.

In a post-Covid-19 society, there is a real chance that we will be increasingly using VR in our daily lives. The organizations building these virtual offerings, and those who oversee these industries, have a duty to ensure it doesn’t lead us into some kind of dystopia. We could end up experiencing much of life alone at home, with no privacy, forgetting the importance of the touch and smell of cultural experiences.

So this shift will need to be handled very carefully. For VR to realize its full potential, we will need to be mindful of the dangers while also making sure that the entry barriers don’t exclude those who can’t afford it.