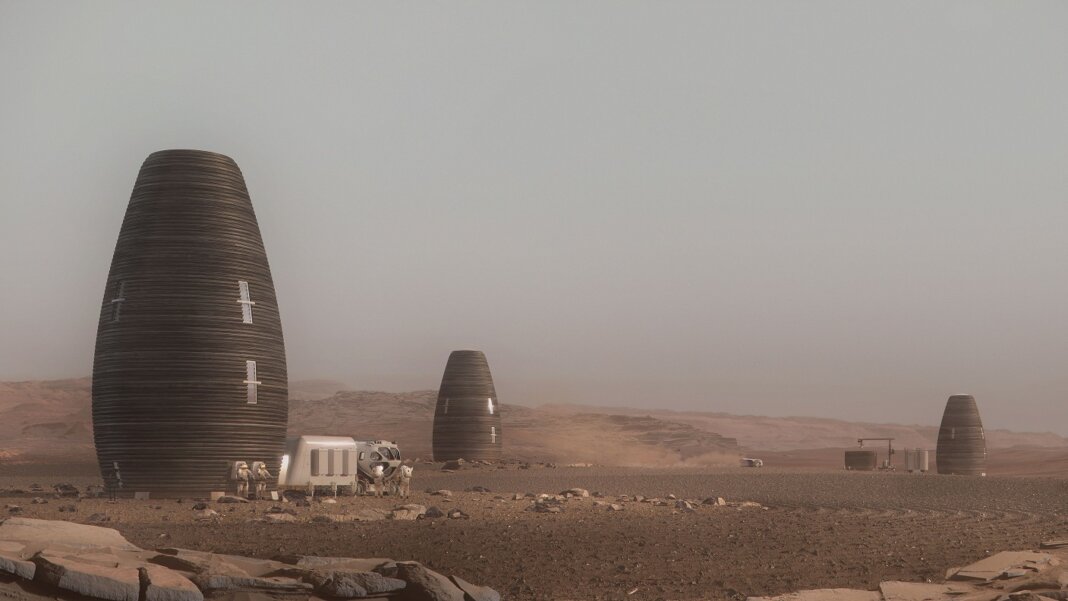 Last month, a 3D printed house that can float on a pontoon was unveiled in the Czech Republic. Last year, work started on a community of 3D printed houses for low-income families in Mexico. While building homes with 3D printers is becoming more scalable, it’s also still a fun way to play around with unique designs and futuristic concepts for our living spaces.

It doesn’t get much more futuristic than living on Mars—and guess what? There’s a 3D printed home for that, too. In fact, there are a few; last year saw the conclusion of a contest held by NASA called the 3D Printed Habitat Challenge.

The long-running competition, started in 2015, tasked participants with creating homes that would be viable to build on Mars. Teams had to consider not just the technology they’d use, but what type of material will be available on the Red Planet and what kind of features a Martian home will need to have for a human to survive (and ideally, to survive comfortably); the structures need to be strong enough to make it through a meteor collision, for example, and able to hold an atmosphere very different than the one just outside their walls.

The top prize ($500,000) went to AI Space Factory, a New York-based architecture and construction technologies company focused on building for space exploration. Their dual-shell, four-level design is called Marsha, and unlike Martian habitats we’ve seen on the big screen or read about in sci-fi novels, it’s neither a dome nor an underground bunker. In fact, it sits fully above ground and it looks like a cross between a hive and a giant egg.

The team chose the hive-egg shape very deliberately, saying that it’s not only optimized to handle the pressure and temperature demands of the Martian atmosphere, but building it with a 3D printer will be easier because the printer won’t have to move around as much as it would to build a structure with a larger footprint. That means less risk of errors and a faster building speed.

“It’s important to be structurally efficient as a shape, because that means you can use less material,” said David Malott, AI Space Factory’s founder and CEO. “If you think about an eggshell on Earth, [it’s] a very efficient shape. The eggshell can be very, very thin, and still it has the right amount of strength.”

The home’s layout is like a multi-level townhouse, except with some Mars-specific tweaks; the first floor is both a preparation area, where occupants can get suited up before heading outside, and a “wet lab” for research. There’s a rover docking port just outside the prep area, attached to the house.

On the second floor is what I’d consider the most important room—the kitchen—and the third floor has a garden, bathroom, and sleeping pods that take the place of bedrooms (sorry, no space for your antique dresser or Ikea desk here). The top floor is a rec area where you can recreate either by watching TV or exercising—or perhaps both simultaneously.

It took 30 hours to build a one-third scale model of the home, but this doesn’t mean it would take 90 hours to build the real thing; printing during the contest was done in 10-hour increments, and since the model contains all the same structural aspects of the full-size home, the 3D printer would just need to expand its reachable surface area and height to print the real thing.

If all goes as planned (which, really, there are no plans yet; just ideas), there will be plenty of material on hand to build the real thing in the real place (Mars, that is). AI Space Factory collaborated with a materials design company called Techmer PM to come up with a super-strong mix of basalt fiber—which would come from rocks on Mars—and a renewable bioplastic that could be made from plants grown on Mars. In NASA’s tests, the material was shown to be stronger and more durable than concrete and more resistant to repeated freezes and thaws.

The company was set to open an Earth version of Marsha, called Tera, in upstate New York this past March, and people leaped at the chance to pay $175-500 to sleep in the structure for a night; but the plans were derailed by the coronavirus pandemic, and the company hasn’t yet announced a re-opening of the Earthbound cabin.