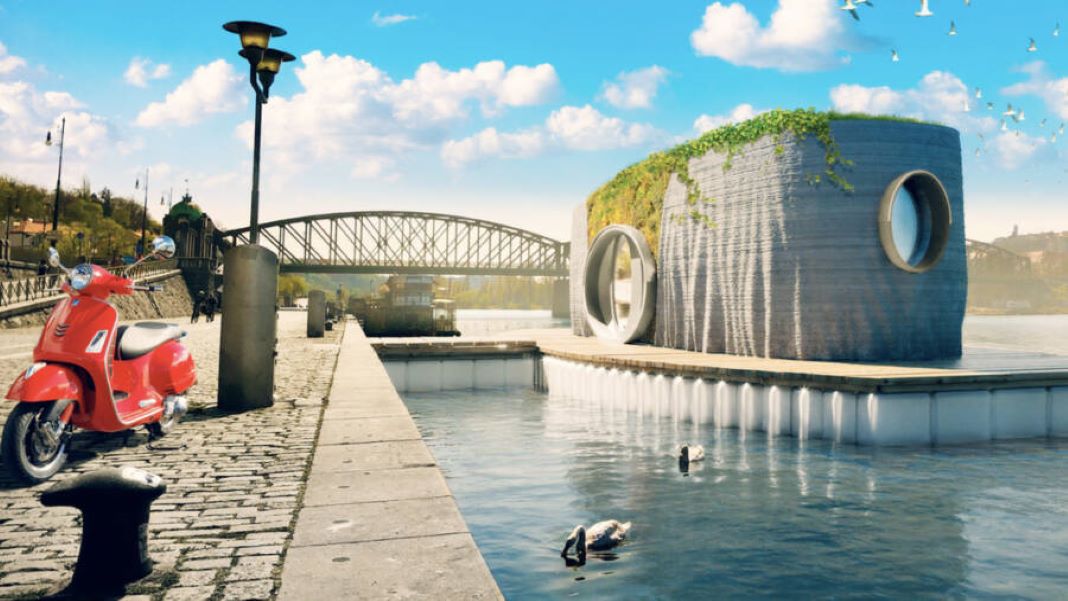 One of the world’s first 3D printed houses went up in China in 2016. At 400 square meters in size and 2 stories tall, the house took 45 days to print—and at the time, this seemed amazingly fast.

Since then, similar houses have popped up in other parts of the world, including Russia, the US, Italy, and even an entire community of 3D printed homes in Mexico.

This month, another country joined the list: the Czech Republic. Not to be outshined by its predecessors, Prvok, as the house has been christened, even boasts a few extra-cool features: it has a green roof, it’s built to last over 100 years, and it can float (not on its own, though). Printed this month in a warehouse in the southwestern city of České Budějovice, the house will be transported to Střelecký Island on the Vltava River in Prague in August, where it will be open to the public.

Prvok is the brainchild of Czech artist Michal Trpak, who collaborated with bank Buřinka to make his vision a reality. “Architecture is rational, calculated in a way,” Trpak said. “Sculpture is irrational and it’s more about emotion. I like to fuse, experiment, and try new materials and technologies.”

The house was printed using a robotic arm called Scoolpt, which was tweaked and reprogrammed for this purpose after initially being used on an automotive assembly line. The material used was a concrete mixture enriched with nano-polypropylene fibers and substances to improve plasticity and speed up drying. “I love concrete for many reasons,” Trpak said. “It can be shaped, cast, molded, sprayed, layered… it offers so many possibilities.” It takes 24 hours for the concrete to initially “set,” or harden, but 28 days for it to set to its full load-bearing capacity, which the project’s engineers say is equivalent to that of a bridge.

It took 2 days (not straight through—22 hours of total printing time), 25 workers, and 17 tons of the custom concrete mixture to print the house, which is about 463 square feet (43 square meters). That’s the size of a studio or small one-bedroom apartment, and the space is divided into a living room/kitchen combo, a bedroom, and a bathroom. The project hasn’t released details about the cost of printing the house or its final price tag after completion.

Though it can stand on land, Prvok was specially designed to live on a pontoon. It’s fitting; with a submarine-like shape and circular porthole-like windows, the house has a distinctly nautical appearance. Trpak claims it can weather at least a hundred years in any environment. “In the future, the owners can crush the building once it has run its useful life, and print it again with the same material directly on the location,” he said.

Granted, 100 years isn’t an extraordinarily long lifespan for a house; there are plenty of them that have been around for that long, and have decades of life ahead of them. But if you consider the speed with which 3D printed houses go up and the simplicity of their construction and materials, it’s a pretty cool build-time-to-longevity ratio.

3D printing has been hailed as a fast, cheap, environment-friendly way to build affordable housing. Earlier this year, a handful of 3D printed homes were added to a community outside Austin, Texas built for people who were previously homeless, and 50 homes are being built for low-income residents of Tabasco, Mexico.

Both of those projects came from Austin-based construction technologies startup ICON, whose co-founder Jason Ballard said, “With 3D printing […] you have the possibility of a quantum leap in affordability. Conventional construction methods have many baked-in drawbacks and problems that we’ve taken for granted for so long that we forgot how to imagine any alternative.”

3D printed houses do have their own drawbacks; they’re most practical in rural areas with low population density, but the world’s biggest need for affordable, safe housing is in or near big cities. The material they can be built from is currently limited to concrete and plastics, which aren’t practical in some climates. And the bare-bones concrete walls that are spit out by a printer can present engineering challenges or limit functionality in the home’s interior.

On the plus side, though, it seems the Czech project has just overcome one big barrier for 3D printed houses: they’re no longer exclusively confined to land.