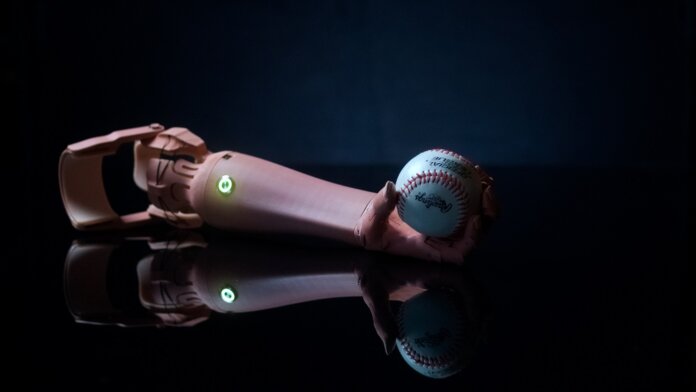 Around 1.9 million people in the US are currently living with limb loss. The trauma of losing a limb is just the beginning of what amputees have to face, with the sky-high cost of prosthetics making their circumstance that much more challenging.

Prosthetics can run over $50,000 for a complex limb (like an arm or a leg) and aren’t always covered by insurance. As if shelling out that sum one time wasn’t costly enough, kids’ prosthetics need to be replaced as they outgrow them, meaning the total expense can reach hundreds of thousands of dollars.

A startup called Unlimited Tomorrow is trying to change this, and using cutting-edge technology to do so. Based in Rhinebeck, New York, a town about two hours north of New York City, the company was founded by 23-year-old Easton LaChappelle. He’d been teaching himself the basics of robotics and building prosthetics since grade school (his 8th grade science fair project was a robotic arm) and launched his company in 2014.

After six years of research and development, the company launched its TrueLimb product last month, describing it as an affordable, next-generation prosthetic arm using a custom remote-fitting process where the user never has to leave home.

The technologies used for TrueLimb’s customization and manufacturing are pretty impressive, in that they both cut costs and make the user’s experience a lot less stressful.

For starters, the entire purchase, sizing, and customization process for the prosthetic can be done remotely. Here’s how it works. First, prospective users fill out an eligibility form and give information about their residual limb. If they’re a qualified candidate for a prosthetic, Unlimited Tomorrow sends them a 3D scanner, which they use to scan their residual limb.

The company uses the scans to design a set of test sockets (the component that connects the residual limb to the prosthetic), which are mailed to the user. The company schedules a video meeting with the user for them to try on and discuss the different sockets, with the goal of finding the one that’s most comfortable; new sockets can be made based on the information collected during the video consultation. The user selects their skin tone from a swatch with 450 options, then Unlimited Tomorrow 3D prints and assembles the custom prosthetic and tests it before shipping it out.

“We print the socket, forearm, palm, and all the fingers out of durable nylon material in full color,” LaChappelle told Singularity Hub in an email. “The only components that aren’t 3D printed are the actuators, tendons, electronics, batteries, sensors, and the nuts and bolts. We are an extreme example of final use 3D printing.”

Unlimited Tomorrow’s website lists TrueLimb’s cost as “as low as $7,995.” When you consider the customization and capabilities of the prosthetic, this is incredibly low. According to LaChappelle, the company created a muscle sensor that picks up muscle movement at a higher resolution than the industry standard electromyography sensors. The sensors read signals from nerves in the residual limb used to control motions like fingers bending. This means that when a user thinks about bending a finger, the nerve fires and the prosthetic’s sensors can detect the signal and translate it into the action.

“Working with children using our device, I’ve witnessed a physical moment where the brain “clicks” and starts moving the hand rather than focusing on moving the muscles,” LaChappelle said.

The cost savings come both from the direct-to-consumer model and the fact that Unlimited Tomorrow doesn’t use any outside suppliers. “We create every piece of our product,” LaChappelle said. “We don’t rely on another prosthetic manufacturer to make expensive sensors or electronics. By going direct to consumer, we cut out all the middlemen that usually drive costs up.” Similar devices on the market can cost up to $100,000.

Unlimited Tomorrow is primarily focused on making prosthetics for kids; when they outgrow their first TrueLimb, they send it back, where the company upcycles the expensive quality components and integrates them into a new customized device.

Unlimited Tomorrow isn’t the first to use 3D printing for prosthetics. Florida-based Limbitless Solutions does so too, and industry experts believe the technology is the future of artificial limbs.

“I am constantly blown away by this tech,” LaChappelle said. “We look at technology as the means to augment the human body and empower people.”