We Need New, Safer Ways to Treat Pain. Could Electroacupuncture Be One? 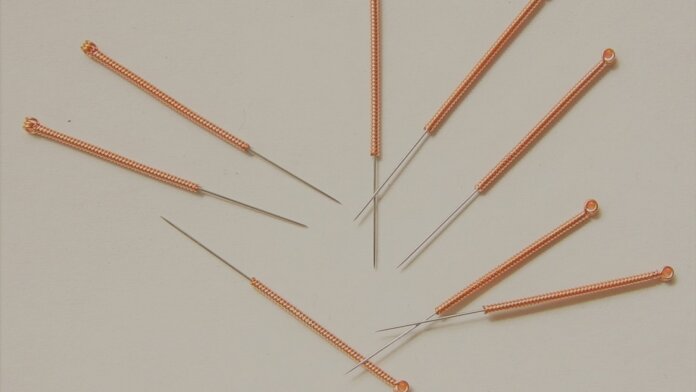 In college, I volunteered to have a needle jabbed into the fleshy part between my thumb and forefinger in the name of acupuncture. I had bruised the area earlier in a lab experiment. I went in thinking I was completely crazy to try it out.

I left thinking that the treatment probably should’ve hurt a lot more than it actually did—and that it might have actually helped with the pain.

One quirk of studying pharmacy at Peking University’s Medical School is that in senior year you have to familiarize yourself with traditional Chinese medicine (TCM). One prominent part of TCM is acupuncture, a practice of sticking sharp needles into specific sites on the body, called “acupoints,” with claims that it can reduce inflammation. It’s remarkably different than Western medicine, my professors said at the time, because these treatments target and stimulate the basic biological processes of some disorders such as pain to root it out—that is, resolve why you’re in pain—in contrast to Western pain medications such as opioids, acetaminophen, or ibuprofen, which only act as a balm or Band-Aid for pain.

I rolled my eyes and skipped that class. Yet recently, as the opioid epidemic raged across North America and the world, the need for better pain treatment options became more prominent than ever.

One idea is to specifically stimulate nerves that act as highway carriers of pain signals and block those signals like a DDoS attack—using some sort of sharp neural interface. If the brain can’t process pain signals coming in, then you don’t consciously feel any pain.

This month, a team from Harvard Medical School, Baylor College of Medicine, and China united East with West with another look at a revamped form of acupuncture—electroacupuncture, which hits the same acupoints as the practice has for centuries, but with mild electrical pulses.

In mice given life-threatening injections of an immune-stimulating chemical called lipopolysaccharide (LPS), the team found that electroacupunture could lower the amount of pro-inflammatory chemicals and double the mice’s survival rate—but only if the mice were first zapped with electricity. If acupuncture was provided after an LPS shock, then the mice showed even higher levels of inflammation. The results were published in the journal Neuron.

“We were really surprised to find that the same input has completely opposite outcomes in different disease stages,” said study author Dr. Qiufu Ma at Harvard. “Most Western medicine has been focusing on blocking the neural pathways of pain to relieve the symptoms, but there are so many pain pathways and so many ways to open each of them.”

You might find acupuncture kind of hokey. But the practice of stimulating nerves to control inflammation is well established in modern medicine.

Take vagus nerve stimulation (VNS). The vagus nerve is a long biological highway that runs from the base of your brain through the neck into the chest and abdomen. It’s a powerful one. For the brain, VNS is approved by the US Food and Drug Administration for various conditions, including epilepsy and depression that hasn’t responded to normal pharmaceutical treatments.

For the body, VNS is potentially helpful for inflammatory bowel disease, likely through a pathway that includes certain types of neurons in the spleen—a pathway that biologists dub the “somatosensory autonomic pathway.” These connections form an intricate web of nerves linking the brain and spine to organs, allowing the latter to function independently of conscious thought, hence the term “autonomic.” Think heart rate, digestion, breathing, waste disposal, arousal and—of note—inflammation.

This is where acupuncture comes in. “One core idea is that [acupuncture] stimulation at specific points…can long-distantly modulate internal organs,” the authors explained. The traditional idea is that this is through so-called “channels” that link the stimulated spot to the actual treatment region. Anatomical studies generally haven’t found direct physical structures that support the idea of channels. However, Ma and team said, the vagus nerve might serve a similar function. For example, at least half a dozen studies have found that stimulating the limb area acupoint can suppress systemic inflammation, partially through the vagus nerve.

The question is how.

To kill pain, the first question is what drives inflammation.

The authors first honed in on an acupoint called ST25 near the belly region. Back in the 90s, scientists found that pinching this spot can activate nerves that lead to the spleen, which produces immune cells and is a major regulator of inflammation.

They first gave the mice a 15-minute electroacupuncture session at the specific spot with 3mA pulses. Afterwards, they injected a powerful toxin called LPS, a life-threatening chemical that triggers vast immune reactions in the mice. LPS is often used to mimic severe bacterial infections in humans and widely used as a way to develop new antibacterial medication.

Remarkably, mice given the electrical zaps showed less amounts of pro-inflammatory chemicals in their blood—dubbed cytokines—than those without the stimulation. However, these effects were nixed in mice without a particular neuronal cell type—NPY cells—that partially form those phone lines between acupuncture and effect, suggesting that they’re necessary for acupuncture’s anti-inflammatory effects.

But it gets weirder. Jabbing the ST25 point only worked to reduce inflammation before the mice got the hyper-inflammatory shot. When given later, the team found that acupuncture actually boosted inflammation levels and drastically reduced the mice’s chance of survival.

Digging into the neural pathways behind these differences, the team found that the electro-needle jab on the belly was able to fine-tune the activity of neurons in pain and inflammation-relays between the spleen and the spine. However, after a hefty dose of LPS, acupuncture stirred up the “fight or flight” pathway through a different set of biological communication lines, which in turn ramped up inflammation to a dangerous level.

In another set of experiments, the team repeated the electrojabs on the mice’s hind legs, but at lower intensity. Here, the stimulation lowered pro-inflammatory molecules in the blood either before or after the LPS assault. This acupoint, dubbed ST36, seemed to trigger a different nerve pathway than the abdominal stimulation—the famous vagus nerve, known for its role in dampening inflammation and pain.

The way they work is a bit different: the abdominal ST25 is a bit more finicky, in that it only helps as a preventative protector. Add in existing inflammation, and it makes things worse. The hind leg ST36, on the other hand, is a total champion at culling inflammation, but only if you zap it with a lighter intensity.

It’s hard to say how these results translate to traditional acupuncture, which doesn’t have the electrical stimulation aspect. In a way, electroacupuncture is a sort of bridge between the old and new: it brings acupuncture and its theories, rooted in thousands of years of history, into the future. An electro-acupuncture needle is in one view a minimally-invasive neural interface that only pierces the top of the skin. And yet, guided by ancient acupunctural maps, it manages to interface with our nerves to reduce inflammation and pain—at least for two points, and in mice.

Do I still roll my eyes at acupuncture? To be honest, yeah. But I’m willing to give it another look.

“Our study illustrated that electroacupuncture has neuroanatomic basis, but its efficacy and safety on humans need to be validated in clinical trials,” said Ma. “There’s still many questions unanswered about this medical practice and thus a lot of room to do more research.”