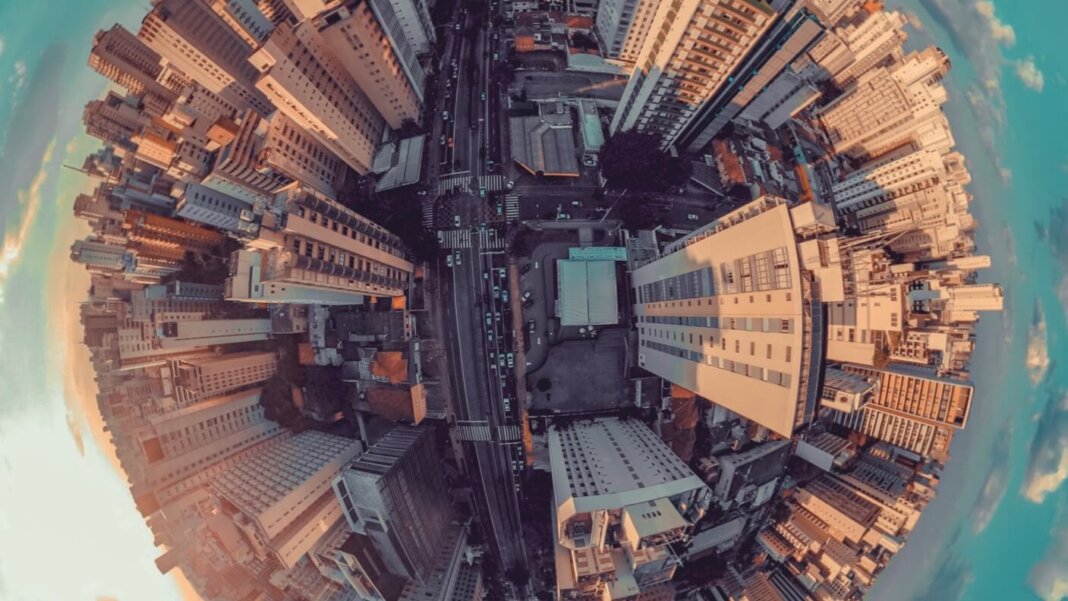 For years it can seem as if the world is predictable, and then all at once, everything changes.

Most of us have been blown away by the speed at which the coronavirus, Covid-19, has swept the world. But 2020’s pace is more comprehensible if you see the pandemic as an exponential phenomenon.

When spreading unchecked, coronavirus infections were doubling over a short time frame, and the doubling time itself was decreasing. This made for a classic exponential curve in which small doublings seemed harmless enough, but then in a blink, they exploded into a worldwide pandemic.

We find it challenging to plan for exponential growth, as our brains are primed for linear growth, where each step is equivalent in size to the last. Lacking planning or foresight, we’re left flatfooted. The exponential growth of the pandemic has taken far too many lives and livelihoods. Its social and economic consequences will be felt for years, and they’re only beginning to become clear.

It’s a lesson in the power of exponential trends to disrupt the status quo, and a crucial reminder that humans are often blind to both exponential opportunities and hazards. We will make it through the pandemic, but will we have learned anything? Let’s take a look at some of the lessons this crisis offers.

The first lesson is that the world is not static. Even the biggest, seemingly most permanent fixtures in our lives—from belief systems to institutions—can and do change. Most of us have lived in an era when, despite the dire tidings of the evening news, conditions have generally improved. As a result, most people have grown up with the belief that the world of the near future will be similar to that of the recent past. Covid-19 is a stark reminder that the world can change radically.

The lesson that large disruptions (both bad and good) are very real is an important one. Humans are surprisingly resistant to change. We can believe that the world we inhabit has always been the way it is and is likely to be that way in the future. It is not only the relatively conservative business community that harbors these beliefs. Even the rational world of science exhibits this kind of intellectual inertia, leading celebrated physicist Max Planck to famously observe, “Science advances one funeral at a time.”

A valuable and positive corollary to the lesson that change happens is we should not be afraid to try new things. The relative risk of experimentation is small. Indeed, it is imperative for the survival of civilization and our species that we experiment despite the traditional resistance to change that has been the norm during “normal” (pre-virus) times.

Change Can Happen Faster Than Expected

The biggest surprise about the power of exponential hazards is how rapidly they can impact the world. Even those of us who have given considerable thought to exponential matters have been surprised by how quickly the world has changed over the last few months.

If the second lesson is that change happens quickly, a related observation is that some of the conditions that we now take for granted are surprisingly recent situations. For example, it is 52 years since humanity first saw the iconic Earthrise photo taken by the crew of Apollo 8. That image led to the first Earth Day and to the acceleration of the global environmental movement. As someone who was around when those events took place, they seem quite recent to me. But surprisingly, our modern world of energy abundance is only about five times as far away in time as Apollo. James Watt’s improved steam engine (unlocking the ancient sun power stored in fossil fuels) triggered the first Energy Revolution and its second-order phenomenon, the Industrial Revolution, only 250 years ago.

What Can We Do With These Lessons?

Now that we’ve experienced the disruptive power of an exponential hazard, what should we do?

First, we should reconsider the importance of dealing with predictable existential threats—events which have the potential to massively disrupt the lives of present and future generations. Often these events have a low probability in a given timeframe but high consequence when they take place. Examples include pandemics or other biological disasters, nuclear war, and asteroid or comet impacts.

Covid-19 has demonstrated the futility of pretending these things can’t or won’t happen or that they will go away by themselves. We should prioritize investing in political, technological, and economic approaches for detecting, preventing, and mitigating the effects of these threats in our post-Covid 19 world.

One existential threat is in a class by itself. The disruption of Earth’s climate patterns by humanity’s carbon dioxide release is already underway and recognized by virtually the entire scientific community and majority of the world. Having experienced the consequences of the morally bankrupt denials of the Covid-19 threat, hopefully we will choose to address the immediate threat of climate change and continue to expand efforts to predict and prevent these other existential threats to humanity.

Resilience Is the Key

How can the world better cope with the threats and disruptions we face?

One approach is to strengthen technological, political, and economic systems so they can withstand disruptions and rapidly adapt to change. The word that best describes that ability is resilience.

Having experienced the Covid-19 disruption, the world is hungry for visions of a positive future. We are now more willing to consider alternative notions of work, education, and sustainable and resilient ways of providing energy, transportation, manufacturing, housing, medical care, and the other core services of civilization. We need to build resilience across the board, but let’s look at two areas near to my heart—energy and space—as examples of what resilience can look like soon and in the more distant future.

The dramatic decreases in the cost of converting solar energy (both directly as sunlight and indirectly as wind) into electricity are already bringing a zero-carbon energy future into reach. Although the popular technology press has been focused on the generation and conversion of energy, the real challenge to a zero-carbon future lies in improving both energy storage and energy networks.

Advances in both these areas can result in more resilient energy systems by adding layers of redundancy and decentralization. In such a network, failure at any one point won’t cause the whole system to fail. (This is the kind of resilience we should be aiming for across civilization’s operating system.)

The electric power grid that is a basis for prosperity in the developed world is essentially the same design pioneered by Westinghouse and Tesla more than a century ago. The advent of low-cost wind and solar energy conversion systems is now driving ways to improve the world’s largest machine (as the grid has been described) to move the electricity generated from renewable energy to both local and distant customers. Improving the grid and extending the availability of electrical energy to the billion or so people who presently have no access is an important social and technical resilience goal.

Some have compared enhanced grid systems to the internet. But there are significant differences between the internet and the grid. The internet has both information pipelines such as high-capacity fiber optic cables and massive amounts of information storage in the form of server farms. By contrast, today’s electricity grid has almost zero ability to store electrical energy at scale.

Much of the energy used by society today is produced from the combustion of fossil fuels, which release carbon dioxide into the atmosphere along with the stored energy of ancient sunlight. Indeed, much of the utility of these fuels lies in their ability to provide energy both when needed, and at the rate required to match the workload. Chemical fuels not only provide energy storage, but they are conveniently transportable by pipelines, ships, and other means. In short, they are at the nexus of both energy storage and energy networks.

Zero-carbon fuels such as hydrogen and ammonia made from sustainable sources of energy will be increasingly used not only as transportation fuels but for a new layer of electrical energy transport networks. Pipelines and other transport methods that move chemical fuels will augment the present “wired” electrical grid and may well surpass it as an energy transport mechanism. These zero-carbon chemical fuels can be used to produce electricity in fuel cells that produce water as a waste product (in the case of hydrogen) or nitrogen-the principal constituent of our atmosphere in the case of ammonia.

Having a multi-layered energy grid, moving energy both “electrically” as well as “atomically “ (as in moving atoms of chemical fuel) strengthens the overall energy system and makes it resilient to production and demand spikes and physical damage, such as weather damage to power lines. Today, local damage caused by a storm, for instance, can cascade. One small failure has the power to take down an entire region.

We have a very dramatic existence proof of the economic opportunities enabled by developing resilient networks. When the (US) Advanced Research Projects Agency funded experimentation into flexible telecommunications, the resulting Arpanet led directly to the internet and the unprecedented wealth creation it enabled. It’s also striking to observe how the internet is presently helping the world cope with the Covid-19 crisis.

The present commercial spaceflight revolution is an essential step towards protecting the Earth and making humanity sustainable in the foreseeable future. The first generation of space activities was driven by geopolitical competition. The political rationale for Apollo could be expressed in four words: “To beat the Soviets.” (And of course, the Soviet rationale was the mirror image of this statement.)

But the real motivation for spaceflight is much more compelling.

When Peter Diamandis and I started the XPRIZE Foundation, we were inspired by the vision of humanity gaining access to the energy and material resources of the solar system and the resulting improved economic and social choices the human breakout into space would bring.

Using materials in free space—outside the deep gravity wells of planets—we can provide Earth-like environments with land areas equivalent to thousands of Earths, capture sufficient solar energy to power Earth’s cities and megacities forever, and enable fast travel throughout the solar system. The same tools and techniques can be used to protect the Earth from asteroid or comet impacts.

Once humanity learns to live anywhere that atoms and energy are available, we become un-killable as a species. Indeed, Frank Drake, the creator of SETI (the search for extraterrestrial intelligence) believes these sorts of space habitation activities are the key to long-lived civilizations which greatly improve the probability of contact between ourselves and others in the galaxy.

Thanks to modern astronomy, we are beginning to understand that the Earth’s biosphere is absolutely unique. Of all the thousands of planets within and outside our solar system, we inhabit the only one that is presently known to contain life. Our profound responsibility to present and future generations to preserve and protect this biosphere makes a compelling case for the quest for resilience.

Indeed, the true rationale for spaceflight is “to save the Earth.”

Let’s get to work.

This article was originally published by the Lindbergh Foundation. Read the original article here.