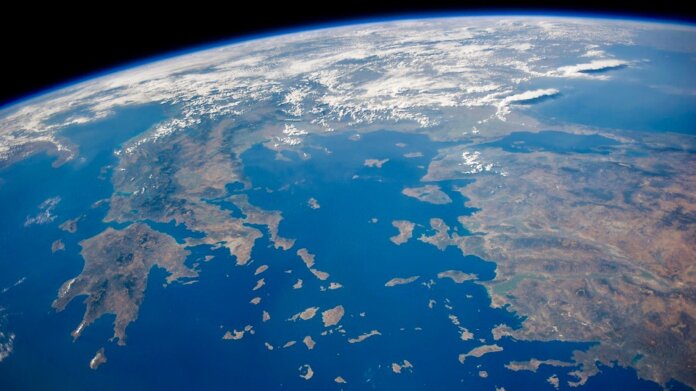 Modern life can feel dizzying, like everything is motion and change. But there are some constants we set our lives against: the relative position of the stars wheeling above, the mountaintops below, and the continents on which we walk. These things feel immutable.

Of course, they aren’t.

The beauty of science is how far it extends our view into space and time. We now know the sun and stars whip around the center of our galaxy just as the Earth orbits the sun. The universe’s hundreds of billions of galaxies are likewise in ceaseless motion, colliding and coalescing in deep time.

And just as the stars are in motion, so too is the ground beneath our feet.

From decades analyzing Earth’s rocks, scientists have assembled an astonishing history of a restless, wandering planet. Earth’s core is a white-hot ball of iron and nickel nestled in a molten sea called the mantle. The surface on which we live is a thin crust of rock, jig-sawed into mammoth plates that skate over the planet’s interior. This motion is called plate tectonics.

The Earth’s plates move agonizingly slowly, little more than a few centimeters a year. To us mayfly-humans, they may as well be eternal and unchanging. But speed up the tape—and they’re anything but.

This week, a team of scientists from the University of Sydney published the most comprehensive simulation of Earth’s tectonic history yet. In a new video, you can watch the last billion years in less than a minute. “These plates move at the speed fingernails grow,” said the University of Sydney’s Dr. Sabin Zahirovic, a coauthor on the paper. “But when a billion years is condensed into 40 seconds a mesmerizing dance is revealed.”

Plates collide and grind past each other; continents form and break apart; oceans split and narrow. For most of that time, earth, sea, and sky would have appeared utterly alien to us.

How, you may understandably ask, can we possible know anything about the motion of Earth’s tectonic plates a billion years ago?

The video’s brevity and smooth visualization belies the intellectual effort that goes into an undertaking like this. In a paper describing the new tectonic model, the team goes over the evidence, gathered by a host of scientists over many years, in painstaking detail.

To stitch together plate simulations, geophysicists search for and record geologic formations correlating to past tectonic movement along plate borders. They also observe magnetic minerals in rock layers to determine the strength and direction of the Earth’s magnetic field over time. Together, this information offers clues about where rocks from around the world were located in the distant past.

The new research isn’t the first such simulation, nor is it the first to go so far back in time. In their paper, the researchers include a family tree of nine other full-plate reconstructions.

Until now, however, all the models have focused on shorter periods of time. Over the last four years, the team quilted four of these models into the simulation you see above—the first continuous, full-plate reconstruction spanning the last billion years.

And the model is, of course, more than a mind-boggling video.

Plate tectonics inform our understanding of the Earth’s composition, climate, and how life emerged and evolved. “Our planet is unique in the way that it hosts life,” said Professor Dietmar Muller, coauthor and leader of the University of Sydney’s EarthByte geosciences group. “But this is only possible because geological processes, like plate tectonics, provide a planetary life-support system.”

Tectonic motion is an evolutionary force—as populations of animals merge and separate over eons—and tectonics also drive planetary carbon and mineral cycles and affect sea level. All this influences both climate and creatures over geological cycles.

This week, in a separate study, for example, scientists from China’s Peking University said a thinning of Earth’s crust from roughly 1.8 billion to 0.8 billion years ago suggests a slowing of plate tectonics. As a result, the formation of mountains ground to a halt and literally wore down to nothing.

Their findings coincide with a period of slow evolution, known as the “boring billion.” More research is needed, but they suggest slower tectonics and mountain formation may have meant less replenishment of the life-sustaining elements upon which animals depend, and thus, lower productivity stalled evolution.

Science aside, it’s fascinating to travel so far into the past, when just three oceans—the Mirovoi Ocean, Mozambique Ocean, and Mawson Sea—lapped at the shores of supercontinent Rodinia. Or when Antarctica, now buried under miles of ice, was a rather balmy place, having wandered up near the equator.

Wait long enough, and the face of the planet will shift again, rearranged by its tectonic dance through deep time.