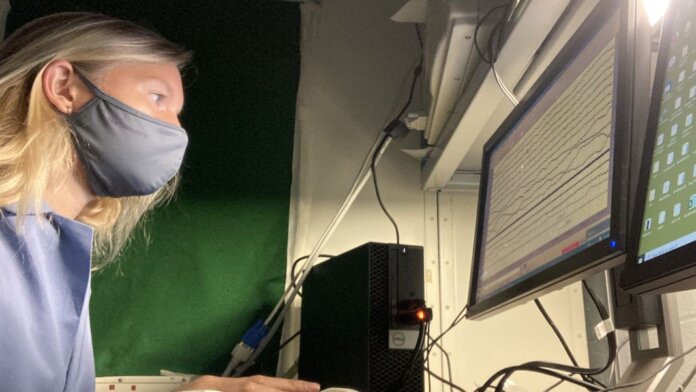 We’ve probed the depths of Earth’s deepest trench, sent rovers to Mars, and observed other worlds billions of light years away. Yet we’ve never been able to decipher the mysterious, bizarre, and disjointed world of our own dreams. It seems impossible: after all, people who dream are fast asleep and oblivious to the outside world.

Except now, we can.

In a mind-bending paper published last week in Current Biology, teams of scientists from four countries found that it’s possible to communicate with people who are actively dreaming. It’s not simple information, either. The volunteers, roughly two dozen spread across four labs, were able to listen to math problems and answer them using facial twitches and eye movements. One group of sleepers could even decipher Morse code, and reply to the outside world in real time.

“Our experimental goal is akin to finding a way to talk with an astronaut who is on another world, but in this case the world is entirely fabricated on the basis of memories stored in the brain,” the researchers said.

This is crazy. Research into dreams has long relied on the recall of people after waking up, which—I’m sure you agree—is riddled with errors, confusion, and missed details. The new study means that we now have a way to directly engage with people while they’re deep asleep, probe the contents of their dreams, and potentially alter them.

“It’s exciting to try something that is seemingly impossible…We can now actually investigate the dreaming state directly and interactively,” said study author Dr. Kristoffer Appel at Osnabrück University. It opens the door to studies such as “learning during sleep…and then still remember it after waking up,” he added. Or using dreams as a new sort of psychotherapy, assisting people with nightmares in real time. Or for creative projects like writing or art, by tapping into a brain state that’s less bound by reality. Or even for entertainment—à la Total Recall or Inception—where a dreamer can be talked into a fantasy scenario of their choice.

There’s just one catch. Not all dream types straddle and bridge the inner mind and outside world. For it to work, you need to be able to lucid dream.

Dreams are amazing paradoxes. While we’re unconscious, the brain fabricates entire fantasies using bits and pieces of encounters during the day, mixed with our personal histories and subconscious ideas. While dreams are so common they feel mundane—people generally aren’t all that interested in hearing someone else’s nighttime mental excursions—scientists have long had a fascination with them as a proxy for the mind.

Sigmund Freud, for example, famously viewed dreams through his psychoanalytic lens, tying the interpretation of dreams to various unconscious “wish fulfillment” fantasies. More recently, dreams have been researched under the umbrella of “sleep cognition,” which scientists believe may be helpful for memory.

As we sleep, our brain activity goes through cycles of activity. Dreams often occur during REM (rapid eye movement) sleep, named after its defining characteristic: our eyes rapidly dart all over the place. REM sleep has been tied to the brain “rewinding” its experiences from the previous day, and replaying them in fast-forward motion, so that critical memories stick around—something dubbed “memory consolidation.” Another school of thought thinks that dreams are our brain’s way of simulating future possibilities, silently sculpting our brain’s neural networks so that if a prediction does happen, we’re able to learn faster and more efficiently.

But the truth is, we really don’t know why we dream, the neuroscience behind dreams, or how the contents of a dream relate to experiences or memory. What if we could just ask the sleeping person as they’re dreaming?

In the new study, the team didn’t recruit any average sleeper. They tapped into the minds of lucid dreamers.

Lucid dreaming sounds like something from a late-night infomercial. While most of us are mere passengers in our dreams, yanked around by our subconscious mind, lucid dreamers become aware during sleep that they’re dreaming. Once aware, they can consciously control the content of their dreams to their heart’s desire, untethered by the rules and physical laws of the real world.

This quirk allows lucid dreamers to use eye movements to communicate with the outside world. By measuring their brain waves using electroencephalography (EEG)—a “swim cap” embedded with electrodes worn like a beanie—researchers can distinguish these dream episodes using the brain’s electrical activity patterns.

The team recruited 36 people with the ability to lucid dream, inviting them into four labs spread across the US, France, Germany, and the Netherlands. The volunteers weren’t all experienced dream astronauts—while a few could easily achieve a lucid state, others were novices far less familiar with this type of dreaming. Scientists then trained each participant on a series of pre-arranged question-answer responses. For example, moving the eyes quickly from right to left signals “yes” or “1.” The participants then put on their brainwave-monitoring caps and went to sleep.

Here’s the really unusual part. The four teams each had a slightly different way to try and establish communication with their sleeping participant—something that’s totally not done in a multicenter scientific study, because it increases confounding factors. Yet these scientists embraced the uncertainty. If all four studies can trigger real-time chitchat between the sleeping and those awake, then that’s solid evidence for their main idea: that we can talk to lucid dreaming people.

The German team had perhaps the toughest experimental recipe. They trained the dreamers on Morse code while they were awake. As the participants entered REM sleep and achieved lucid dreaming, the team used a series of Morse code beeps to ask them yes-or-no questions, or simple math problems. For example, “what’s three plus one,” can be translated into Morse code form. The dreamers, while certified asleep based on their brain waves, would then roll their eyes left to right four times, signaling the answer is “four.”

It gets weirder. Other teams simply spoke to the dreaming person once they established that the dreamer was lucid from his eye movements. The French team, for example, asked if the participant liked chocolate. Another team tapped onto their volunteers’ skin a math problem, such as eight minus six.

“It’s amazing to sit in the lab and ask a bunch of questions, and then somebody might actually answer one,” said study author Karen Konkoly at Northwestern University. “It’s such an immediately rewarding type of experiment to do…You can see it right there while they’re still sleeping.”

Altogether, out of 158 tries to establish communication with the dreamers, the scientists were able to get the correct answer 18 percent of the time. The dreamers answered wrongly just a bit over three percent of the trials. The success rate may seem measly. However, when similar tests were tried during non-lucid REM sleep—when outward communication was likely non-existent—the success rate tanked to 0.2 percent.

“The fact that response signals were exceedingly rare during these communication attempts… lends additional credence to our position that correct signals were not spurious but rather reflect successful cases of communication during lucid dreaming,” the authors said.

Even more fascinating, once awoken, the participants reported that the questions had incorporated into their dreams.

For example, one person said that he was at a party with friends when the scientist’s voice came “from the outside,” like the narrator of a movie. Another mentioned that he perceived finger tapping while he was “fighting against goblins” in the dream, and being surprised that he could do math in battle. A few people remembered their answers even after awakening.

Besides being pretty amazing, the study brings up some interesting questions about manipulating the contents and emotions of a sleeper’s dream. Could we use light, sound, or speech to guide someone away from a nightmare? Could we use dreams as a way to help improve sleep in people with depression, anxiety, or post-traumatic stress disorder? And how would interactive dreaming affect the brain’s normal ability to learn or etch previous memories into the brain?

“We have a lot of different ideas and we’re excited to test them,” said Konkoly.