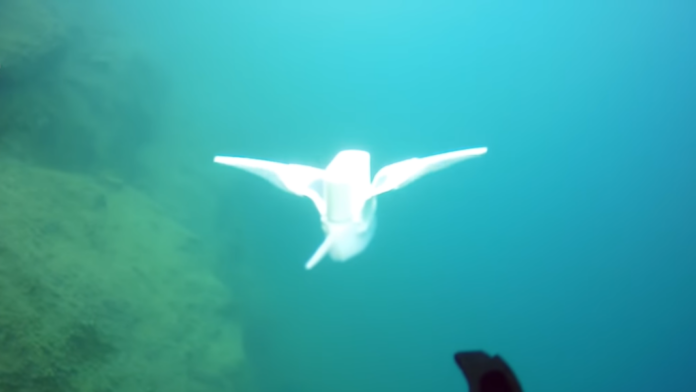 While all eyes were on the dramatic descent of NASA’s Perseverance rover last month, a team sent a robot into another alien world, one closer to home: the deep sea.

With its towering undersea mountains, dramatic geological features, and unique creatures—many of which remain mysterious—the deep sea is the last uncharted environment on Earth. The inaccessibility isn’t surprising. Sinking any intrepid explorer into blackened waters means facing freezing temperatures and crushing pressure. Ever listened to the sound of metal creaking under pressure? It’s absolutely terrifying. Without protection, puny electronic components in a robot don’t have a chance.

Yet despite these hostile conditions, biology’s found a way to thrive. And scientists have taken note. Inspired by a deep sea fish, a team from China engineered a soft autonomous robot that can withstand the punishing conditions of the lowest low—the bottom of the Mariana Trench. The robot’s body roughly resembles a stingray, with two large flapping fins and a tail that allows it to easily maneuver through the surrounding waters.

Rather than having a single “brain,” the robot’s delicate electronics are spread out through its silicon body, similar to the nervous system of worms. This design removes the need for heavy and clunky pressure-resistant cases, explained Drs. Cecilia Laschi and Marcello Calisti at the National University of Singapore and the University of Lincoln, respectively, who were not involved in the work.

It’s not just theoretical talk. The team put their robot to the test, actually sinking it to the bottom of the Mariana Trench, the deepest part of the ocean. The robot thrived, flapping around in its surroundings and perhaps intriguing or bewildering native marine animals.

The bot “pushes the boundaries of what can be achieved,” said Laschi and Calisti. The deep sea is a gold mine of unique biology, enormous geological features, and mineral resources. With a soft but tough-as-nails robot, we may finally have a way to explore uncharted ocean depths.

Maneuvering down the Mariana Trench is harder than scaling Mount Everest without oxygen.

The Challenger Deep, at over 35,000 feet below sea level, represents the lowest point of the trench. The pressure there is hard to wrap your head around: roughly a thousand times the normal atmospheric pressure at sea level, or more colorfully described as “an elephant standing on your thumb.”

These crazy pressures are why deep sea exploration equipment is normally heavily enforced. “Rigid robots and machines require pressure vessels” to encapsulate them, the authors explained, which are often made of bulky and cumbersome metallic material. Navigating these depths ends up as a game of playing catch-up, in which the thickness and dimensions of these enclosures need to scale up to cope with increasing pressure. Even so, the extreme conditions of the deep sea make structural failure easy.

By the time classic bots reach the Challenger Deep, they’re basically rigid bots wearing heavy metal gloves—clunky and hardly natural. They don’t fit in with their surrounding environment, with heavy arms and propellers that can potentially damage any marine, coral, or other samples they pick up.

That’s when marine engineers turned to soft robots. Taking inspiration from marine animals that gracefully maneuver through their surroundings—the octopus is a favorite—scientists tapped silicone and other pliable materials to build soft structures that can stretch and move with ease.

“Soft robots are intrinsically safer than their conventional rigid counterparts,” with a bunch of boosted capacities, said Laschi and Calisti. For example, they can squeeze into tight spaces, scale across uneven surfaces, and interact with wildlife in a more natural way.

The team’s spark of inspiration came with the discovery of a deep sea squishy fish back in 2014, the Mariana hadal snailfish. The worm-like, transparent creature has the snout of a puppy and fins extending from its head. Its favorite habitat? Over 26,000 feet deep in the Mariana Trench. Its discoverer, Dr. Mackenzie Gerringer of the State University of New York, soon reconstructed the strange animal using 3D printing to better understand how it propels itself to swim.

The new study took notes from the snailfish, engineering a similar robot with the ability to withstand tremendous pressure while swimming autonomously. The body of the robot is a fish-like shape with two flapping fins. The fins are attached to the soft core of the bot with “muscles,” or a soft, stretchy material that converts electrical energy into movement. The bot has a battery to store the “juice” needed for its movement. When the battery shoots off an electrical current, it stimulates the “muscles” to contract. Because the “muscles” are hooked to the fins with a few tiny solid connectors, the muscle movement translates into the entire fin flapping, propelling the robot to swim forward.

The fish-like bot isn’t quite the speed runner. When tested in a lab where it swam around a pole, it managed a little less than half a body length per second, which is in line with but slightly slower than other soft robots.

Where it stands out, however, is its ability to deal with crushing pressure. Vetoing the idea of rigid metal protectors, the team instead spaced out the electrical components inside the silicon body—similar to how the hadal snailfish organizes its skull. The snailfish’s skull isn’t completely fused, providing it with a degree of malleability so that the pressure on the skull can equalize to outside pressure.

This stark departure from the usual—packing all electronics together into a single “brain”—paid off. Lab tests and simulations found that a spread-out configuration reduced pressure on any single interface between component, meaning that the robot’s “brain” acted more as a flexible slinky than a rigidly-tethered nervous system.

Out In the Real World

The team didn’t stop at lab testing. They went for the real thing: field testing in the real world. In all, they put their bot into three different environments: around 230 feet in a lake, over 10,000 feet in the South China Sea, and finally the ultimate challenge, the Challenger Deep.

In the first two trials, the robot was allowed to swim free, going about two inches per second at the fastest. For the Mariana Trench test, the bot was connected to a conventional underwater robot for support and photo ops while it flapped its wings. Under extreme pressure, the bot worked like a charm.

The bot could be a game-changer in how we explore the deep sea—especially its teeming, bizarre marine life. Compared to traditional metallic robotic grippers, the soft bot can gently handle living specimens without scaring them off or damaging them.

It “paves the way to a new generation of deep-sea explorers,” said Laschi and Calisti.

There’s much to improve on. One thing is speed. While self-powered and controlled, the trench bot nevertheless swims slower than previously reported underwater bots. It’s more sensitive, in that it can be easily swept away by underwater currents. Looking ahead, it’ll also need to be equipped with cameras and intelligent sensors to capture its environment. Even so, the bot “lays the foundations for future generations of resilient and reliable deep-sea explorers,” said Laschi and Calisti.

In the long term, swarms of trench bots could unveil the mysteries of the deep sea while monitoring its health. Soft robots could safely navigate coral forests or underwater caves, picking up specimens without damaging the environment. They could also spread across the seabed to monitor for pollution, microplastics, or changes in marine life. But more fundamentally, like armies of Mars rovers, we may finally have a way to explore the mysteries hiding at the depths of our great oceans. Who knows what we’ll find?