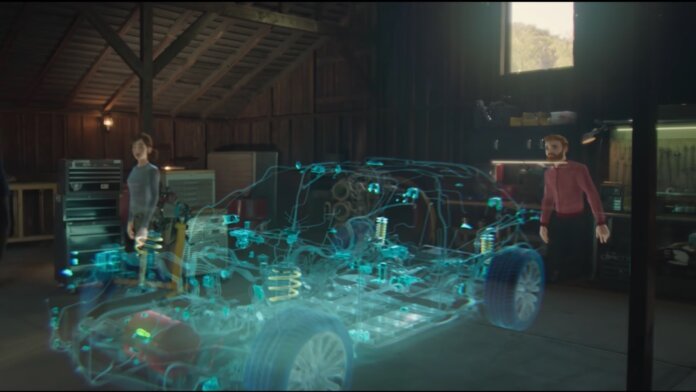 A little over a year ago, millions of people wouldn’t have been able to fathom doing their jobs without going into their offices (for months on end, at that). Yet a year after much of the Western world shut down due to Covid-19, those same people—or, the ones who haven’t suffered the misfortune of losing their jobs—have been working from home, aided by tools like Zoom and Slack. We’re all really hoping this is the last pandemic we’ll ever see, but nonetheless, new tools for remote work—or, really, for any sort of human interaction that involves participants in different physical locations—will continue to come to market.

One of these is Microsoft’s Mesh, unveiled last week at the company’s Ignite conference. With the tag line “here can be anywhere,” the mixed reality platform promises to make remote interactions feel more lifelike than they ever have. A promotional video for the technology shows real-time holograms of people being beamed in to work alongside others, and 3D data popping up in midair. It is, in short, really cool.

The holograms are a vision for the future; for now, people can appear as virtual avatars, which they can create to their liking in AltspaceVR.

Users will get the most immersive experience using HoloLens 2, Microsoft’s mixed reality smart glasses released in 2019. Despite being described as “ergonomic,” they’re more of a bulky headset than a pair of glasses, and they don’t come cheap; HoloLens 2 is currently priced at $3,500. This will be one of the biggest barriers Microsoft faces in making Mesh widely adoptable, as even getting the price down to half or a third of where it’s at now would leave the hardware out of reach for most consumers.

“This has been the dream for mixed reality, the idea from the very beginning,” Alex Kipman, Microsoft Technical Fellow and inventor of Kinect and HoloLens, told The Verge. “You can actually feel like you’re in the same place with someone sharing content or you can teleport from different mixed reality devices and be present with people even when you’re not physically together.” An emphasis on accurately replicating users’ eye contact, facial expressions, and gestures in real time should help make this happen.

In his keynote at Ignite, Microsoft CEO Satya Nadella noted Mesh’s potential for bringing people together by comparing it to Xbox Live, an online multiplayer gaming and digital media delivery platform the company launched in 2002. “Think about what Xbox Live did for gaming. We went from single player to multiplayer, creating communities that helped people connect and achieve together,” he said. “Now just imagine if the same thing happened with mixed reality.”

Microsoft isn’t the only company planning to use holographic technology to enhance the future of work. A company called PORTL is working on a hologram box it calls Epic HoloPortl. It has high-resolution transparent LCD screens in its interior walls, and the person appearing as a hologram just needs to have a camera and be standing against a white background. But if the HoloLens 2 is bulky and expensive, the HoloPortl is much more so, being the size of a telephone booth and costing $60,000.

No technology, no matter how advanced, will ever be able to replace the experience of being in a room with someone. But if you think about how differently things would have played had Covid come along, say, 20 years ago instead of now, the comparison is striking. The economy would have fallen apart on a far more dramatic scale than it did in 2020; the existence of video calling and instant messaging, and the fact that we can all use these tools for no financial cost, were a substantial part of what kept the economy from completely crumbling.

This is all to say, while we undoubtedly prefer the notion of a future where newfangled remote-work tech won’t be needed and we can all go back to feeling like humans and interacting the way humans are meant to interact—in person—the truth is that these tools come in pretty handy. And they just may end up saving your job, and mine.