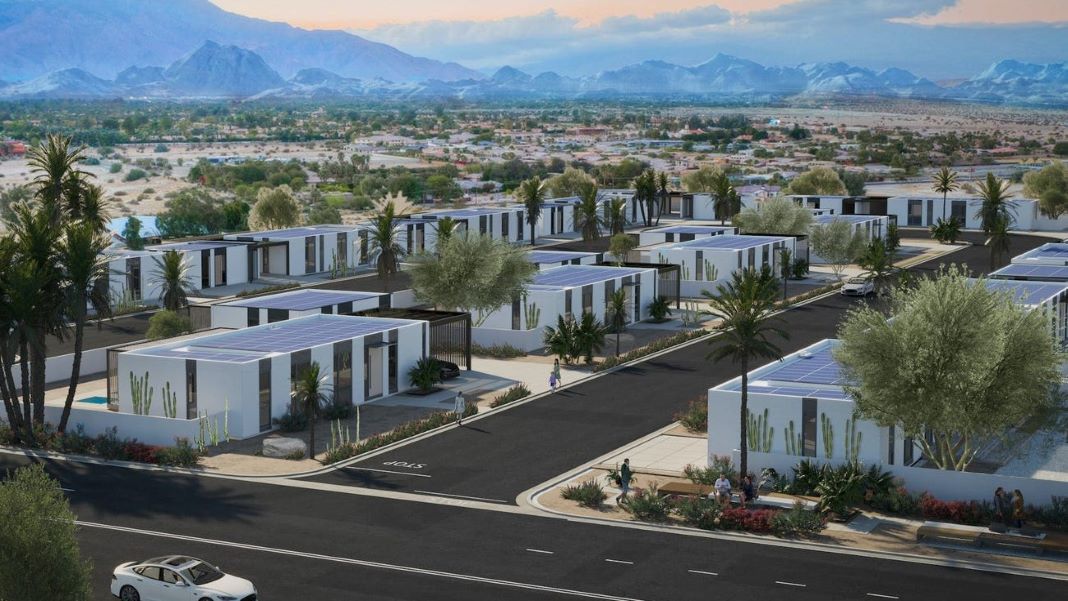 Last summer an Oakland, California-based startup called Mighty Buildings came out of stealth mode after raising $30 million in venture capital funding. One of the homebuilder’s first product offerings was a backyard house, or “accessory dwelling unit”—a 350-square-foot studio marketed to homeowners who have extra space on their property, and a desire for either some rental income or a separate space to host visitors.

Their ultimate aim, though, was to partner with developers and build entire communities using its technology. Less than a year later, they’ve signed their first such deal, for a $15 million development in Rancho Mirage, near Palm Springs in California’s Coachella Valley. The developer is Beverly Hills-based Palari Group, which was founded in 2014 and focuses on “integrating technology, wellness and sustainability.”

The community will consist of 15 homes built on 5 acres of land. Unlike other 3D printed homes, though, there won’t be printers putting down layers of a concrete mixture on-site. Mighty Buildings has a modular, prefabricated approach: they print individual panels at their manufacturing facility in Oakland, which are then shipped to the construction site and put together there. They developed a synthetic stone material that starts to dry and harden upon contact with UV light.

Mighty Buildings got its start at well-known Silicon Valley incubator Y Combinator in 2018. After coming out of stealth in August of 2020, the company raised an additional $40 million in series B funding in February. CEO and co-founder Slava Solonitsyn said that since the company’s 2020 launch, it’s seen more than a tenfold increase in bookings for its accessory dwelling units. “Despite launching in the midst of a pandemic, we are racing to fulfill the demand and orders for 2021 at our Mighty Factory in Oakland, California,” he said.

3D printing has been touted as a potential solution to housing shortages, particularly for low-income or homeless individuals and families due to the cost savings brought by the technology. But the Coachella Valley project is very much marketed towards a high-income segment of the population; Rancho Mirage is “known for its exclusive gated communities, beautiful golf courses, and superb tennis facilities.” Realtor.com lists the town’s median home price at $649,500.

The 3D printed homes should fit right in. At 1,450 square feet apiece, they’ll have 3 bedrooms, 2 bathrooms, and their own accessory dwelling units in the yard with 2 more bedrooms and a bathroom. Pools, hot tubs, fire pits, and open-air showers can be built in the homes’ backyards, and smart home technology will monitor things like air quality, temperature, and lighting. The community’s energy will come primarily from solar panels—makes sense in a part of the country with plenty of sunshine year-round—and buyers can add a Tesla Powerwall for backup if they choose.

Details of how much each home will sell for and how long they’ll take to build haven’t been released, but according to Business Insider the development will be completed by spring of 2022. Given that Mighty Buildings was able to lock down its first big project within half a year of coming out of stealth, it’s safe to say the Rancho Mirage community will likely soon be followed by many more of its kind.