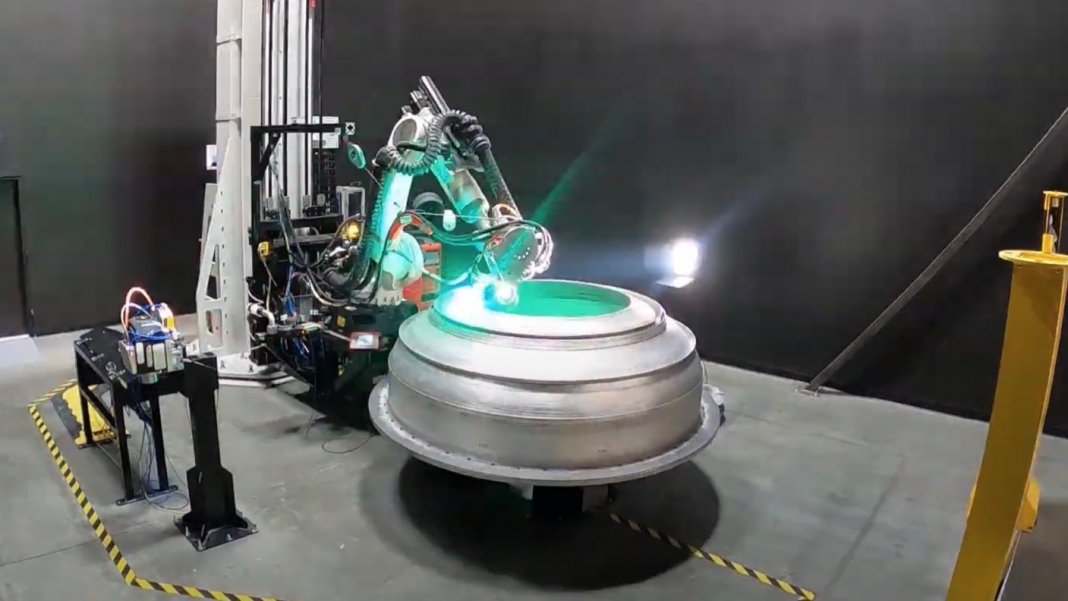 Relativity Space has the audacious goal of 3D printing 95 percent of a rocket and sending it to orbit. Getting to space is hard. But completely reinventing how rockets are manufactured at the same time? Harder. Six-year-old upstart Relativity may nail both by the end of this year.

The second stage of the Terran 1 they hope to launch later this year is now complete. And in a video showing its printing, you can see the stage materialize like a clay pitcher at the potter’s wheel. At speeds of about a foot a day, the 3D printer finished the stage in three weeks. And the first stage, they say, is 75% done too.

Next, the company will add Aeon engines and avionics and test both stages. Then, after welding the whole rocket together with another robotic arm, it’ll be time to launch.

Historically, building rockets has been a time-consuming, hands-on process.

In the case of the Space Shuttle, for example, fabricating the rocket part that injects streams of fuel into an engine’s thrust chamber—called the shear-coaxial injector—took two years. Relativity can print one in two weeks.

The company says 3D printing benefits—like vastly simplified designs that can only be achieved additively, accelerated prototyping, and design flexibility—apply too. They’ve been able to cut the number of parts in a rocket from upwards of 60,000 to 730 and significantly dial back development lead times.

Whatever the benefits on Earth, Relativity also has its eyes on Mars. Far from Earth’s factories and supply chains, the advantages are clear. Relativity’s moonshot is to perfect their machines to the point they can send printers and raw materials to Mars and simply print return rockets (and perhaps much more) on site.

All this has attracted plenty of attention from investors. The company’s raised over $685 million so far, including $500 million last November at a valuation of $2.3 billion. They also have several billion dollars’ worth of contracts in the pipeline, CEO Tim Ellis told CNBC last month.

After Terran 1, Relativity has plans to build another bigger rocket, Terran R.

Terran R will be in the same class as SpaceX’s Falcon 9 and similarly reusable. Indeed, like SpaceX, Relativity hopes to eventually recover the whole rocket—first stage, second stage, and fairing—a feat they believe 3D printed parts may help them realize.

An almost entirely 3D printed, fully reusable rocket would be a formidable addition to the market. But first, the company needs to make orbit.

As Ars Technica’s senior space editor, Eric Berger, noted this week, they’re making good progress, but there are plenty of unanswered questions. The proof will be in the pudding, and at the earliest, said pudding will launch later this year. After testing over the summer, Relativity aims to assemble the first and second stages for launch in Florida. Launch dates are always subject to change, but they’re currently still on schedule for 2021.

When asked about the chances the rocket will make orbit, Ellis said, “The expectation is that we’re going to learn a lot.” Which is the right answer.

Expectations are more suitably tempered for test rockets these days. SpaceX’s widely followed test launches have normalized very public, very fiery failures. Elon Musk’s tweets about the chances a rocket will undergo “rapid unscheduled disassembly” deftly lighten the mood and reset expectations: We may do something amazing, or crash and burn. In either case, enjoy the show. Perfection is the enemy of speed and learning.

Relativity, in theory, has a leg up in this respect, as they can evolve their design more easily. So, perhaps whether or not they make orbit the first time—which doesn’t tell us much about how they compare to competitors—is less interesting than whether their process helps them learn from the test, iterate, and improve at a faster clip.

SpaceX is still, without a doubt, years ahead of the competition.

But its talent and culture are beginning to spread out and influence the rest of the industry. Whereas space startups used to stock up on former NASA engineers, these days many of the up-and-comers, Relativity included, are also staffed by SpaceX alumni.

And they’re all hungry to try new things. From 3D printed rockets to air-launched rockets, there’s energy and creativity to spare at the moment.

Regardless of which up-and-comers triumph, competition and a diversity of approaches should continue to push prices down. And the more affordable it is to get stuff to orbit, the more we can do when we arrive.