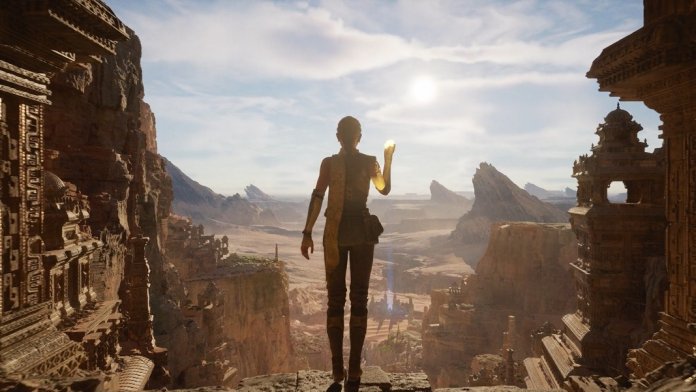 If you saw the 2018 movie Ready Player One, you may remember the Oasis: a glitzy, fast-paced metaverse with gleaming cities, beautiful people (or, avatars, to be precise), and excitement of many varieties; in short, the perfect escape from the drudgery of real life.

We may be on track to our own version of the Oasis after an announcement yesterday from Epic Games that it has raised $1 billion to put towards building “the metaverse.”

Epic Games created the hit video game Fortnite, and its Unreal engine has been used to create many other popular games. An eye-popping demo released last May shows off Epic’s Unreal Engine 5, its next-gen computer program for making video games, interactive experiences, and augmented and virtual reality apps, set to be released later this year. The graphics are so advanced that the demo doesn’t look terribly different from a really high-quality video camera following someone around in real life—except it’s even cooler. In February Epic unveiled its MetaHuman Creator, an app that creates highly realistic “digital humans” in a fraction of the time it used to take.

So what’s “the metaverse,” anyway? The term was coined in 1992 when Neal Stephenson published his hit sci-fi novel Snow Crash, in which the protagonist moves between a virtual world and the real world fighting a computer virus. In the context of Epic Games’ announcement, the metaverse will be not just a virtual world, but the virtual world—a digitized version of life where anyone can exist as an avatar or digital human and interact with others. It will be active even when people aren’t logged into it, and would link all previously-existing virtual worlds, like an internet for virtual reality.

Epic Games’ CEO Tim Sweeney told Venture Beat that the metaverse will be a linear evolution, not a sudden massive disruption. “It’s going to be a meeting place for individuals and creators of all sizes, including brands,” he said. “If you are a car manufacturer, your brand presence in the metaverse isn’t going to be a bunch of advertising for your cars. It’s going to be a place where you can actually drive the cars around and feel the experience of it…We have an opportunity for much, much more interesting interactions.”

Sweeney added that the technology needed to build the metaverse is already available. And if anyone is going to build “the” metaverse, it seems Epic is in the best position for it. Facebook, Google, and Samsung have all been investing heavily in cloud computing and virtual reality, and Facebook’s Horizon is a VR social space intended to serve as a metaverse. But it’s gamers that often own the most powerful computer processors available to consumers.

Take Fortnite. It started out as a four-player cooperative game in 2017, but has since become a social platform complete with live events, its own in-game currency, and a massive following (350 million registered accounts as of May 2020).

Looming challenges remain, like latency and speed, accessibility and cost, and security. Despite his company’s apparent lead in creating the metaverse, last year Sweeney called for collaboration, saying “We need to give up our attempts to each create our own private walled gardens and private monopoly and agree to work together and recognize we’re all far better off if we connect our systems and grow our social graphs together.”

It’s unclear how quickly the metaverse will progress, but Epic Games certainly has a solid base to build from with its new funding, and a head start on the most convincing graphics out there.

Another detail you may remember from Ready Player One is that the real world, at least that of the protagonist Wade Watts, is pretty miserable; people live in tents and lean-tos, or trailers stacked one over another on scaffolding. Crime and poverty are rife. “People come to the Oasis for all the things that they can do, but they stay because of all the things they can be,” says Wade. “It’s the only place that feels like I mean anything.”

We’re already living in a world where many people prefer to live life online; we’re glued to our phones, computers, and smart TVs for the vast majority of our waking hours, and our interactions with chatbots, AIs, and digital devices like Alexa may soon catch up to our interactions with other humans. So it seems there’s a very real danger that once the metaverse becomes widely accessible (which, granted, is many years if not decades away), people will prefer to live there.

As steps are taken towards building the metaverse, then, we mustn’t stop trying to make the real world beautiful and exciting, too.