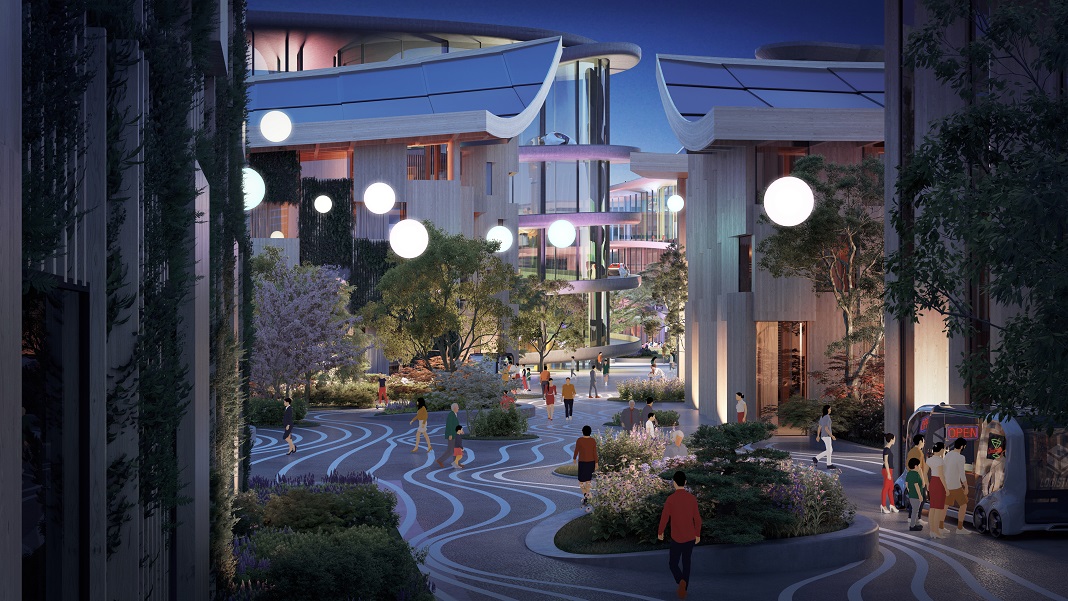 Most of the focus for making self-driving cars a widespread reality is on the cars themselves, specifically on the technology they require to safely perceive and interact with the world around them: sensors, cameras, lidar, and the like, all sitting on software platforms that integrate AI and machine learning. But what if it’s not all about the cars? Maybe it’s equally important to get cities ready to adapt to a driverless future. That’s what the world’s biggest carmaker is betting on, anyway.

South of Tokyo at the base of Mount Fuji, Toyota is spearheading a project it calls Woven City. Plans for the futuristic prototype city were unveiled at CES in 2020, and construction began this past February. This week Toyota announced it’s partnering with Japanese petroleum company ENEOS to build a hydrogen fuel cell system that will be the city’s source of power.

Hydrogen is both a promising and a complicated source of power. Its energy density is almost three times that of gasoline on a mass basis, but on a volume basis it’s far less dense, meaning it needs to be compressed to get more energy from the same volume. Currently, ENEOS operates 45 commercial hydrogen refueling stations in different parts of Japan, and Toyota’s Mirai runs on hydrogen (the 2021 model comes with six years of free fuel!).

As part of the partnership, ENEOS will install a hydrogen refueling station near Woven City and produce “green hydrogen” there, which will supply fuel cell generators in the city. They’ll also build a supply and demand management system and do research on hydrogen supply (never mind Elon Musk’s opinion that hydrogen fuel cells are “extremely silly”).

“We believe that hydrogen energy will play an integral role in the realization of carbon neutrality on a global scale,” said Katsuyuki Ota, president of ENEOS. “By working together with Toyota to fully explore hydrogen’s potential, we believe we can make a significant contribution to the creation of new hydrogen-based lifestyles.” Solar panels will also supply part of the city’s energy needs.

Woven City’s green power sources are just one piece of the futuristic puzzle that the prototype will put together.

The city’s smart homes will reportedly be able to automatically take out residents’ trash and restock their refrigerators (using grocery-shopping robots?), and sensor-based AI will even monitor residents’ health. Whether people will welcome this sort of “service” or see it as an invasion of privacy remains to be determined. Woven City residents will include Toyota employees and their families, retirees, and scientists, among others. More than 3,000 people have already applied, and the company plans to launch the city with 2,000 residents at first, then add to that over time.

Sensors embedded in all manner of infrastructure will send data to cars to raise their “awareness” of surroundings and road conditions. Forecasts predict there will be up to 33 million autonomous cars sold annually by 2040. However, this prediction should be taken with a grain of salt; as recently as five years ago, companies were predicting we’d reach full autonomy by 2020, and that’s not been the case. Self-driving cars, like AI as a whole, appear to be harder than we think, and it’s worth taking more time to bring them to market if it means improved safety, efficiency, and urban logistics—not to mention public trust.

“Building a complete city from the ground up, even on a small scale like this, is a unique opportunity to develop future technologies, including a digital operating system for the city’s infrastructure. With people, buildings and vehicles all connected and communicating with each other through data and sensors, we will be able to test connected AI technology… in both the virtual and the physical realms … maximizing its potential,” said Akio Toyoda, president of Toyota Motor Corporation, in a press release.

Watching how Toyota’s Woven City experiment unfolds could be a telling lens into the future, not just for driverless cars, but for smart technology, clean energy, and the willingness of residents to live among millions of sensors collecting all sorts of data about them and their day-to-day lives.

Toyota chose the name “Woven City” because the company actually got its start making steam-powered looms in the 1890s; in this case, what’s being woven together is the technology, infrastructure, and services for the cities of the future. Construction is scheduled to be completed in 2024.