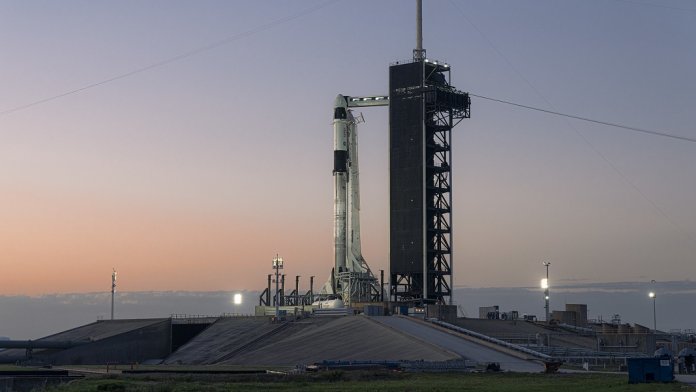 A year ago SpaceX made headlines after posting job openings for operations engineers. The task at hand? To help design and build an offshore rocket launch facility—aka, a floating spaceport. Between the job postings and Elon Musk’s tweet that the spaceports were intended for launches to Mars, the moon, and hypersonic travel around Earth, the whole thing seemed somewhat outlandish.

A year later, though, SpaceX is forging ahead with its plans. Musk tweeted this week that construction on the first spaceport has begun, and rockets may launch from it as soon as next year.

Ocean spaceport Deimos is under construction for launch next year https://t.co/WJQka399c7

The floating spaceport plans have actually been in motion since almost a year ago, when a SpaceX-affiliated LLC bought two offshore oil rigs in July of 2020. The rigs were sold by Valaris, the world’s biggest offshore drilling company, which is headquartered in Houston and incorporated in the UK. After filing for Chapter 11 protection in August of 2020, the company completed a financial restructuring and came out of bankruptcy this past April.

The rigs SpaceX bought are classified as “ultra-deepwater semi-submersible,” and they sold for $3.5 million each. A semi-submersible is an offshore drilling platform that can be moved from place to place; while most of it floats above the water’s surface, it ‘anchors’ itself using pontoon-type columns submerged under water. Ultra-deepwater drilling takes place at depths of 1,500 meters (~5,000 feet) or deeper.

What this all adds up to? SpaceX bought some of the sturdiest floating rigs out there—aka, what you’d expect for a place rockets will launch from and land on. And not just any rockets—the biggest ever used in spaceflight. Starship’s 160-foot spacecraft plus 230-foot booster makes for a 394-foot-tall (taller than the length of a football field) by 30-foot-wide rocket.

Both rigs are located in the Port of Brownsville at the southern tip of Texas, very near the border with Mexico—and conveniently, near SpaceX’s Starship development facility in Boca Chica (whose name Musk wants to change to “Starbase.” I mean, if you lived there, that name alone would give you some bragging rights, wouldn’t it?).

SpaceX quickly renamed the rigs, from “rigs 8500 and 8501” to Phobos and Deimos, the names of Mars’s two moons. It seems construction on Deimos is moving along first, according to Musk’s tweet.

Right now it seems entirely possibly that the spaceports will be launch-ready long before the spaceships are; of the rocket’s first five high-altitude flights, three exploded on contact during landing and the fourth exploded a few minutes after landing. The fifth flight, which just took place a month ago, was explosion-free and thus successful. To get to the three-a-day launches Musk envisions, though, SpaceX will need a far better scorecard than one out of five.

On the plus side, the company did just hit a significant milestone in reusability when one of its B1051 boosters completed its tenth flight over the course of just 26 months.

And there are all kinds of plans in the works, from sending a Starship into orbit on its way to Hawaii to launching the “full stack” Super Heavy booster and Starship as soon as July.

We can’t be sure that SpaceX’s plans will play out on the exact timeline given (which, in the case of the spaceports, is appropriately vague; “as soon as next year” allows for a solid 11 months or so of wiggle room), but the company thus far hasn’t had many issues with a lack of follow-through. That means it’s only a matter of time until we see rockets launching off converted oil rigs and heading for the moon, all corners of Earth, and Mars.