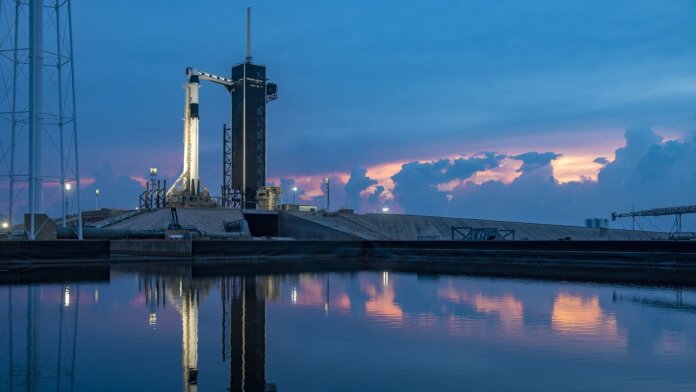 The coronavirus pandemic stopped a lot of things, but it hasn’t done much to slow down SpaceX and Elon Musk. The company sent two NASA astronauts to the International Space Station last month in the first-ever commercially-operated crewed mission, and it’s scheduled to launch its tenth group of Starlink satellites next week and a GPS satellite for the US military later this month.

As if all that weren’t enough, SpaceX is also starting to take action on plans to build floating launchpads for travel to the moon, Mars, and around Earth. Musk tweeted earlier this week about the company’s spaceport plans and a corresponding job posting for offshore operations engineers.

The offshore platforms would serve primarily to launch the company’s massive Starship rockets, which are being built and tested in Brownsville, a small city in southern Texas near the border with Mexico. The first three Starship prototypes were destroyed during testing, and most recently, the fourth prototype exploded during an engine test late last month.

Not to be deterred, Musk is forging ahead on the floating launchpads despite these setbacks; he did say last year that Starship would likely go through at least 20 design iterations before being ready to launch.

At 394 feet tall by 30 feet wide, the rocket outsizes all those previously used in spaceflight, including the Saturn V used in NASA’s Apollo program. But the most impressive feature of the Starship, which consists of a 160-foot spacecraft plus a 230-foot booster, is that it’s being designed to be fully reusable. Last November Musk estimated Starship launches could cost as little as $2 million, which is about 1 percent of what NASA launch costs average.

Given that there’s still much work to be done before a launch actually happens, that estimate could end up being wildly inaccurate; but even if it’s multiplied by a factor of 10, the cost will still be dramatically low compared to its predecessors.

So why the need to launch from a platform floating on water instead of using good old solid land?

SpaceX hasn’t given details about its motivation for this seemingly complex and expensive undertaking, other than a reply tweet in which Musk said the launches and landings had to be “far enough away so as not to bother heavily populated areas.” The company’s plan to eventually carry out up to three launches and landings per day would certainly necessitate putting some serious distance between the launch site and people; most of us could only handle about one sonic boom a month, if that.

A wide no-fly zone and road closures go into effect on launch days. And if Starships do eventually shuttle people around Earth or beyond on a daily basis, the takeoff and landing points would need to be conveniently located; going a few miles offshore is likely better in this regard than finding a huge empty swathe of land in, say, New Mexico or Nevada.

Rather than building the launchpads from scratch, it’s possible SpaceX would refurbish existing oil rigs; the bigger rigs are about the size of two football fields, and there are plenty of them in the Gulf of Mexico, though only a couple very near Brownsville. Given the ailing state of the oil industry, especially after the pandemic, it’s likely there will be rigs to be had for cheap.

Wild, But Not That Much

One outstanding question is what sort of impact the launch pads would have on marine life, especially if something were to go wrong. This won’t be the first time a rocket takes off from or lands offshore, though—SpaceX has landed more than one Falcon 9 on a barge in the Atlantic, and a Boeing-founded company called Sea Launch has a floating launchpad from which it successfully launched over 30 boosters carrying communications satellites. That platform, called Odyssey, is a modified oil rig, but hasn’t seen a launch since 2014 and was relocated from Long Beach, California to Russia’s eastern seaboard earlier this year.

It’s hard to say what sort of wild, futuristic visions Musk and SpaceX may bring to fruition next. But considered alongside ideas like hyperloop transportation, implanting electrodes in the human brain, a million-mile car battery, global satellite-enabled internet, or “nuking” Mars—launching rockets from a platform in the ocean actually doesn’t sound all that crazy.