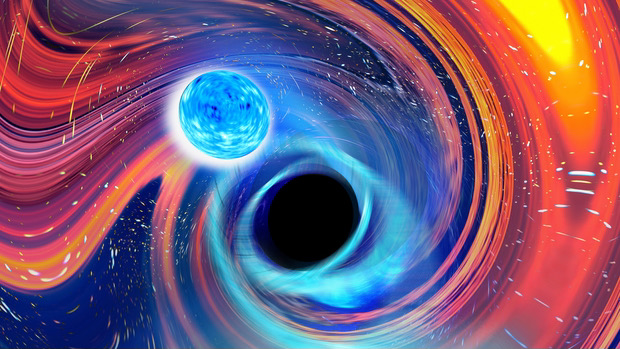 One of the best things about being an astronomer is being able to discover something new about the universe. In fact, maybe the only thing better is discovering it twice. And that’s exactly what my colleagues and I have done, by making two separate observations, just ten days apart, of an entirely new type of astronomical phenomenon: a neutron star circling a black hole before being gobbled up.

The two observations were made in January 2020, by the Laser Interferometer Gravitational-wave Observatory (LIGO) and the Virgo Observatory, both of which detect gravitational waves from the distant cosmos.

After 18 months of painstaking analysis, our discoveries were published in The Astrophysics Journal Letters. The new observations open up new avenues to study the life cycle of stars, the nature of space-time, and the behavior of matter at extreme pressures and densities.

The first observation of a neutron star-black hole system was made on January 5 2020. LIGO and Virgo observed gravitational waves—distortions in the very fabric of space-time—produced by the final 30 seconds of the dying orbit of the neutron star and black hole, followed by their inevitable collision. The discovery is named GW200105.

Remarkably, just ten days later, LIGO and Virgo detected gravitational waves from a second collision between a neutron star and a black hole. This event is named GW200115. Both collisions happened around 900 million years ago, long before the first dinosaurs appeared on Earth.

Neutron stars and black holes are among the most extreme objects in the universe. They are the fossil relics of massive dead stars. When a star that is more than eight times as massive as the Sun runs out of fuel, it undergoes a spectacular explosion called a supernova. What remains can be a neutron star or a black hole.

Neutron stars are typically between 1.5 and 2 times as massive as the Sun, but are so dense that all their mass is packed into an object the size of a city. At this density, atoms can no longer sustain their structure and dissolve into a stream of free quarks and gluons: the building blocks of protons and neutrons.

Black holes are even more extreme. There is no upper limit to how massive a black hole can be, but all black holes have two things in common: a point of no return at their surface called an “event horizon,” from which not even light can escape, and a point at their center called a “singularity,” at which the laws of physics as we understand them break down.

It is fair to say black holes are an enigma. One of the holy grails of 21st-century physics and astronomy is to find a deeper understanding of the laws of nature by observing these strange and extreme objects.

A New Type of Star System

Neutron stars orbiting black hole companions have long been thought to exist. LIGO and Virgo had been searching for them for more than a decade, but they remained elusive until now.

So why are we so confident we’ve now seen not one such system, but two?

When LIGO and Virgo observe gravitational waves, the first question on our minds is “what caused them?” To find that out, we use two things: our observational data and supercomputer simulations of different types of astronomical events that could plausibly explain those data.

By comparing the simulations to our real observations, we look for those characteristics that best match our data, homing in on the likely ones and ruling out the unlikely ones.

Similarly, from the second (GW200115), we determined its most likely source was the final few orbits and collision of a 5.7-solar-mass black hole with a 1.5-solar-mass neutron star.

There is no definitive smoking gun that the lighter objects are neutron stars, and in principle they could be very light black holes, although we consider this explanation unlikely. By far the best hypothesis is that our new observations are consistent with the merger of neutron stars and black holes.

Our discoveries have several intriguing implications. Neutron star-black hole systems allow us to piece together the evolutionary history of stars. Gravitational-wave astronomers are like stellar fossil-hunters, using the relics of exploded stars to understand how massive stars form, live, and die.

We have been doing this for several years with LIGO and Virgo’s observations of pairs of black holes and pairs of neutron stars. The newly discovered rarer pairs, containing one of each, are fascinating pieces of the stellar fossil record.

For the first time we have directly measured the rate at which neutron stars merge with black holes: we think there are likely to be tens or hundreds of thousands such collisions across the universe per year. With more observations, we will measure the rate more precisely.

What happens to the neutron stars after they’ve been gobbled up? Now we’re really looking at the laws of nature turned up to 11. When neutron stars merge with black holes, they are deformed, imprinting information about their exotic form of matter onto the gravitational waves we observe on Earth.

This can reveal the composition of neutron stars, which in turn tells us about how quarks and gluons behave at extreme pressure and density. It doesn’t tell us what’s going on behind the black hole’s event horizon, although another aspect of our discoveries is that we can look for hints of new physics in black holes in the gravitational-wave signals.

When LIGO and Virgo resume observing in mid-2022 after an upgrade to boost their sensitivity still further, we will see more collisions between neutron stars and black holes. In the coming decade we expect to amass thousands more gravitational-wave detections.

Over time we hope to piece together the laws of nature that will help us understand the inner workings of the most extreme and impenetrable objects in the universe.