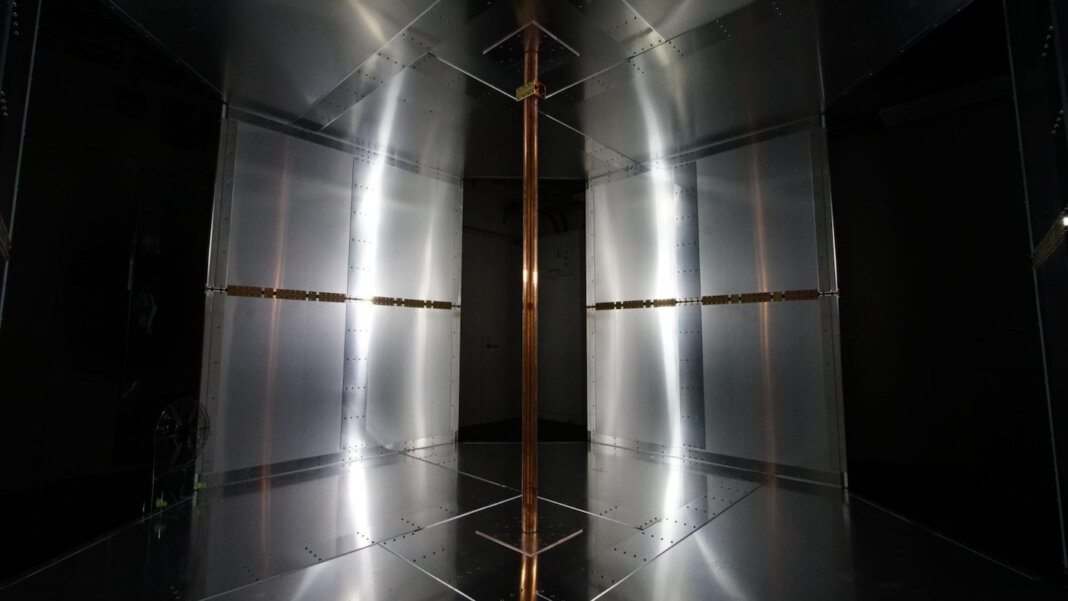 Today, wireless charging is little more than a gimmick for high-end smartphones or pricey electric toothbrushes. But a new approach that can charge devices anywhere in a room could one day allow untethered factories where machinery is powered without cables.

As the number of gadgets we use has steadily grown, so too has the number of cables and chargers cluttering up our living spaces. This has spurred growing interest in wireless charging systems, but the distances they work over are very short, and they still have to be plugged into an outlet. So, ultimately, they make little difference.

Now though, researchers have devised a way to wirelessly power small electronic devices anywhere in a room. It requires a pretty hefty retrofit of the room itself, but the team says it could eventually be used to power everything from mobile robots in factories to medical implants in people.

“This really ups the power of the ubiquitous computing world,” Alanson Sample, from the University of Michigan, said in a press release. “You could put a computer in anything without ever having to worry about charging or plugging in.”

Efforts to beam power over longer distances have typically used microwaves to transmit it. But such approaches require large antennas and targeting systems. They also present risks for spaces where humans are present because microwaves can damage biological tissue.

Commercial wireless chargers instead rely on passing a current through a wire charging coil to create a magnetic field, which induces an electric current in a wire receiving coil installed in the device you want to charge. However, the approach only works over very short distances—roughly equal to the diameter of the charging coil.

The new approach, outlined in a paper in Nature Electronics, works on similar principles, but essentially turns the entire room into a giant magnetic charger, allowing any device within the room that has a receiving coil to draw power.

To build the system, Sample and colleagues from the University of Tokyo installed conductive aluminum panels in the room’s walls, floor, and ceiling and inserted a large copper pole in the middle of it. They then mounted devices, called lumped capacitors, in rows running horizontally through the middle of each panel and at the center of the pole.

When current passes through the panels, it’s channeled into the capacitors, generating magnetic fields that permeate the 100-square-foot room and deliver 50 watts of power to any devices in it.

This is actually the second incarnation of this technology. Sample first introduced the idea in a 2017 paper in PLOS ONE while working for Disney. But the latest research solves a crucial limitation of the earlier work. Previously the system produced a single magnetic field that swirled in a circle around the central pole, resulting in dead spots in the corners of the square room. The new setup creates two simultaneous magnetic fields, one spinning around the pole and another concentrated near the walls themselves.

This way the researchers were able to achieve charging efficiency above 50 percent in 98 percent of the room compared to only 5.75 percent of the room for the previous iteration. They also found that if they only relied on the second magnetic field, they could remove the obstructive pole and still get reasonable charging in most of the room (apart from right at the center).

While that’s a significant improvement, it still means that on average 50 percent of the power coming out of the wall socket is wasted. Such low efficiencies are a common problem for wireless charging, as an investigation by OneZero found last year.

Given the small amount of power required to charge everyday devices it’s unlikely to have an especially notable impact on most user’s power bills, according to the report. But at a society-wide scale it could be significant waste of power and source of unnecessary carbon emissions.

This is only a prototype though, and considering the dramatic increase in efficiency between the first and second versions, this efficiency gap could be closed. A more pressing concern might be the cost and complexity of retrofitting buildings with massive aluminum plates in the walls.

Indeed, the researchers are working on both issues. “We’ve just developed a brand-new technique. Now we have to go figure out how to make it practical,” Sample told Scientific American.

Still, while this kind of seamless wireless charging won’t be ubiquitous in the near term, the technique could soon be used in niche situations, like charging cabinets for power tools, and ultimately, the researchers think it could be make the factories of the future cable-free.

Image Credit: The University of Tokyo