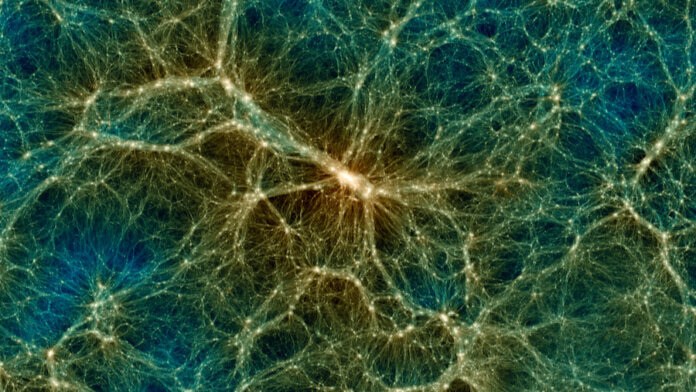 Remember the philosophical argument our universe is a simulation? Well, a team of astrophysicists say they’ve created the biggest simulated universe yet.  But you won’t find any virtual beings in it—or even planets or stars.

The simulation is 9.6 billion light-years to a side, so its smallest structures are still enormous (the size of small galaxies). The model’s 2.1 trillion particles simulate the dark matter glue holding the universe together.

Named Uchuu, or Japanese for “outer space,” the simulation covers some 13.8 billion years and will help scientists study how dark matter has driven cosmic evolution since the Big Bang.

Dark matter is mysterious—we’ve yet to pin down its particles—and yet it’s also one of the most powerful natural phenomena known. Scientists believe it makes up 27 percent of the universe. Ordinary matter—stars, planets, you, me—comprise less than 5 percent. Cosmic halos of dark matter resist the dark energy pulling the universe apart, and they drive the evolution of large-scale structures, from the smallest galaxies to the biggest galaxy clusters.

Of course, all this change takes an epic amount of time. It’s so slow that, to us, the universe appears as a still photograph. So scientists make simulations. But making a 3D video of almost the entire universe takes computer power. A lot of it. Uchuu commandeered all 40,200 processors in astronomy’s biggest supercomputer, ATERUI II, for a solid 48 hours a month over the course of a year. The results are gorgeous and useful. “Uchuu is like a time machine,” said Julia F. Ereza, a PhD student at IAA-CSIC.

“We can go forward, backward, and stop in time. We can ‘zoom in’ on a single galaxy or ‘zoom out’ to visualize a whole cluster. We can see what is really happening at every instant and in every place of the Universe from its earliest days to the present…”

Perhaps the coolest part is that the team compressed the whole thing down to a relatively manageable size of 100 terabytes and made it available to anyone. Obviously, most of us won’t have that kind of storage lying around, but many researchers likely will.

This isn’t the first—and won’t be the last—mind-bogglingly big simulation.

Rather, Uchuu is the latest member of a growing family tree dating back to 1970, when Princeton’s Jim Peebles simulated 300 “galaxy” particles on then-state-of-the-art computers.

Every few years, it seems, astronomers break new ground. In 2005, the biggest simulated universe was 10 billion particles; by 2011, it was 374 billion. More recently, the Illustris TNG project has unveiled impressively detailed (and yet still huge) simulations.

Scientists hope that by setting up the universe’s early conditions and physical laws and then hitting play, their simulations will reproduce the basic features of the physical universe as we see it. This lends further weight to theories of cosmology and also helps explain or even make predictions about current and future observations.

Astronomers expect Uchuu will help them interpret galaxy surveys from the Subaru Telescope in Hawaii and the European Space Agency’s Euclid space telescope, due for launch in 2022. Simulations in hand, scientists will refine the story of how all this came to be, and where it’s headed.

(Learn more about the work in the team’s article published this month in the Monthly Notices of the Royal Astronomical Society.)

Image Credit: A snapshot of the dark matter halo of the largest galaxy cluster formed in the Uchuu simulation. Tomoaki Ishiyama