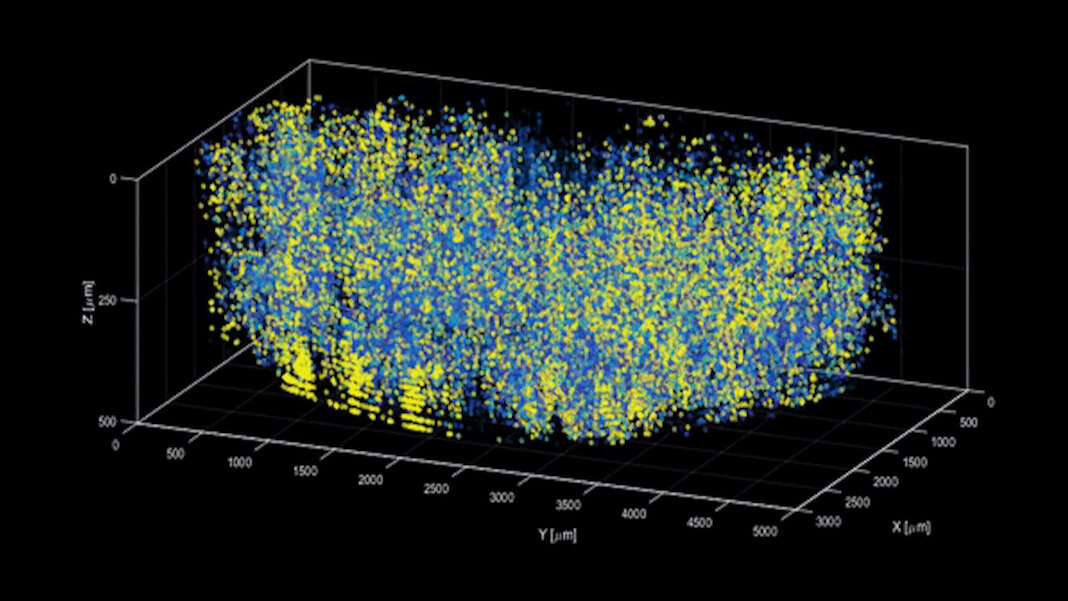 The brain is the center of every human being’s world, but many of its inner workings are yet mysterious. Slowly, scientists are pulling back the veil.

Recently, for example, researchers have created increasingly intricate maps of the brain’s connections. These maps, called connectomes, detail every cell and synapse in small areas of the brain—but the maps are static. That is, we can’t watch the cellular circuits they trace in action as an animal encounters the world and information courses through its neural connections.

Most of the methods scientists use to watch the brain in action offer either low resolution and wide coverage or high resolution and narrow coverage. A new technique, developed by researchers at The Rockefeller University and recently published in the journal Nature Methods, is the best of both worlds. Called light beads microscopy, the team was able to record hundreds of thousand of neurons in 3D volumes through time.

In a striking example, they released a movie of a million neurons firing in a mouse brain as it went about its day.

Typically, neuroscientists use a technique called two-photon microscopy to record neurons as they fire. Laser pulses are sent into the brain where they interact with fluorescent tags and cause them to light up. Scientist then interpret the light to infer activity. Two-photon microscopy can record small bands of neurons in action, but struggles for bigger groups.

The light beads technique builds on two-photon microscopy, with a clever tweak. Instead of relying on single pulses too slow to record broad populations of neurons firing, it divides each pulse into 30 sub-pulses of varying strengths. A series of mirrors sends these sub-pulses into the brain at 30 different depths, recording the behavior of neurons at each depth almost simultaneously. The technique is so speedy that its only limitation is how quickly the fluorescent tags respond to the pulses of light.

To test it, the team outfitted a microscopy platform—essentially a lightweight microscope that can be attached to a mouse’s head to record brain activity as it moves about—with the new light beads functionality and put it to work. They were able to capture hundreds of thousands of neurons signaling to each other from across the cortex.

Even better? Because light beads builds on already-widely-used two-photon microscopy, labs should already have or be able to readily procure the needed equipment.

“Understanding the nature of the brain’s densely interconnected network requires developing novel imaging techniques that can capture the activity of neurons across vastly separated brain regions at high speed and single-cell resolution,” Rockefeller’s Alipasha Vaziri said in a statement. “Light beads microscopy will allow us to investigate biological questions in a way that had not been possible before.”

But the technique won’t replace standard two-photon microscopy, Vaziri says. Rather, he sees it as a complementary approach.

Indeed, the growing quiver of imaging technologies, from those yielding static wiring diagrams to those recording function in vivo, will likely combine, quilt-like, to provide a far richer picture of how our brains do what they do.

Researchers hope this kind of work can shed light on how the brain’s complex networks of neurons produce sensations, thoughts, and movement, what causes them to malfunction, and even to help us engineer our own intelligent systems in silicon.