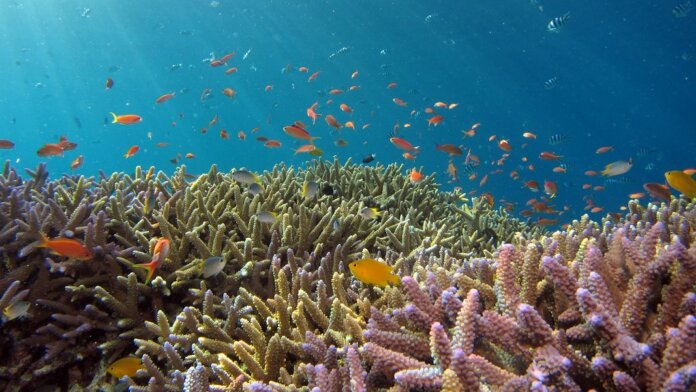 Climate change is wreaking havoc on land via extreme weather events like wildfires, hurricanes, floods, and record-high temperatures. Glaciers are melting and sea levels are rising. And of course, the ocean isn’t immune to all this upheaval; our seas are suffering rising water temperatures, pollution from plastics and chemicals, overfishing, and more.

A British startup is tackling one vitally important component of ocean damage: restoring coral reefs, and in the process, protecting the coastlines they sit on and fostering marine ecosystems within and around them.

Ccell was founded in 2015 by Will Bateman, a civil and environmental engineer whose doctorate at Imperial College London involved studying the directional effects of extreme ocean waves. Bateman applied that research in founding the company, which uses an “ultra-light curved paddle” to harness energy from waves, combining this energy with an electrolytic technique to grow artificial reefs.

Here’s how it works. A structure made of steel is immersed in the sea—a modular design with units 2.5 meters (8.2 feet) long and up to 2 meters (6.5 feet) high means the reefs can be customized for different areas—then low-voltage electrical currents produced by wave energy pass between the steel and a metal anode. This produces oxygen at the anode and causes the pH to rise at the cathode (the steel), causing the dissolved salts that naturally exist in seawater to calcify onto the steel and turn to rock.

It’s a slow process—the rock grows at a rate of about 2.5 centimeters (1 inch) per year—but Ccell claims the method accelerates coral growth, enabling fragments of broken or farmed corals to grow faster than they would on natural reefs. The reefs are considered “hybrid” because they’re not fully natural, but once they’ve been in the water for a while, they essentially act as a substrate on which many components of a natural reef can thrive.

Besides housing thriving ecosystems of marine life that include everything from coral to fish, lobsters, clams, and sea turtles, reefs also help protect the shorelines they’re near by breaking down waves. While large waves tend to be destructive, small waves can actually re-deposit sand on the beach and help preserve it. Because Ccell’s reefs are porous, they induce turbulence in waves and further reduce their force before they reach the shore.

Beaches in areas that draw tourists are particularly interested in keeping their sand. Ccell installed its first reef substrate over the summer at Telchac Puerto, a resort near the city of Mérida on Mexico’s Yucatan peninsula. If the reef succeeds at protecting the shoreline and fostering a healthy marine ecosystem, Ccell will likely be installing many more like it in the near future.

Artificial reefs aren’t a new idea. One similar to Ccell’s was installed in Sydney Harbor in 2019, and around the world are reefs made from decommissioned oil rigs, aircraft carriers, or ships. What sets Ccell apart is the electrolysis that helps rock form (which is based on a technology called Biorock that the Global Coral Reef Alliance has been using since 1996), and the fact that it’s now going commercial.

It’s not just beach resorts that are taking note of hybrid reef technology. DARPA’s Reefense project is looking to hybrid reefs to “mitigate the coastal flooding, erosion, and storm damage that increasingly threaten civilian and Department of Defense infrastructure and personnel.”

Crowdcube, a British investment crowdfunding platform that led Ccell’s seed funding, estimated a global market of £50 billion ($67 billion) for hybrid reefs, noting that Quintana Roo—the Mexican state adjacent to Yucatan, where Cancun and other popular resorts are located—spent around £7.7 million ($10.3 million) per mile to add sand to its beaches, and 6 to 8 percent of that washed away within a year.

A more cost-effective, long-term solution is in order. Ccell appears to be on the right track, but at a rate of one inch of rock growth per year, it may take a while to know for sure.