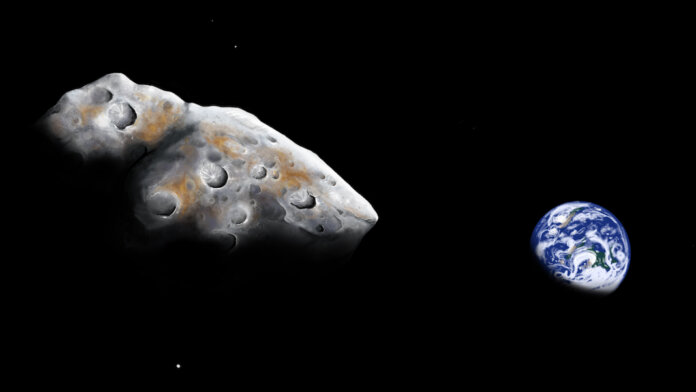 It’s often said Earth’s resources are finite. This is true enough. But shift your gaze skyward for a moment. Up there, amid the stars, lurks an invisible bonanza of epic proportions.

Many of the materials upon which modern civilization is built exist in far greater amounts throughout the rest of the solar system. Earth, after all, was formed from the same cosmic cloud as all the other planets, comets, and asteroids—and it hardly cornered the market when it comes to the valuable materials we use to make smartphone batteries or raise skyscrapers.

A recent study puts it in perspective.

Lead author Juan Sanchez and a team of scientists analyzed the spectrum of asteroid 1986 DA, a member of a rare class of metal-rich, near-Earth asteroids. They found the surface of this particular space rock to be 85% metallic, likely including iron, nickel, cobalt, copper, gold, and platinum group metals prized for industrial uses, from cars to electronics.

With the exception of gold and copper, they estimate the mass of these metals would exceed their global reserves on Earth—in some cases by an order of magnitude (or more).

The team also put a dollar figure on the asteroid’s economic value.

If mined and marketed over a period of 50 years, 1986 DA’s precious metals would bring in some $233 billion a year for a total haul of $11.65 trillion. (That takes into account the deflationary effect the flood of new supply would have on the market.) It probably wouldn’t make sense to bring home metals like iron, nickel, and cobalt, which are common on Earth, but they could be used to build infrastructure in orbit and on the moon and Mars.

In short, mining one nearby asteroid could yield a precious metals jackpot. And there are greater prizes lurking further afield in the asteroid belt.

Of course, asteroid mining is hardly a new idea. The challenging (and expensive) parts are traveling to said asteroids, stripping them of their precious ore, and shipping it out.

But before we even get to the hard parts, we need to prospect the claim.

This study, combined with future NASA missions to the asteroid belt, should help bring the true extent of space resources into sharper focus.

The Priceless Cores of Dead Protoplanets

What makes 1986 DA particularly interesting is its proximity to Earth.

Most metal-rich asteroids live way out in the asteroid belt, between Mars and Jupiter. Famous among these is 16 Psyche, a hulking, 140-mile-wide asteroid first discovered in 1852.

The asteroid belt was once thought to be the remnants of a planet, but its origins are less certain now.

Still, scientists speculate Psyche may be the exposed core of a shattered planet-in-the-making. And indeed, smaller metal-rich asteroids may also be the shards of a protoplanetary core.

Under this theory, developing planets in the asteroid belt grew large enough to differentiate rocky mantles and metal cores. These later suffered a series of collisions, leaving their shattered rocky remains and broken metal hearts to wander the belt.

We may never observe Earth’s core in person, so, if the theory is true, Psyche could be our next best alternative. Also, the existence of so much exposed metal in one place is tantalizing for those who would extend humanity’s presence beyond Earth.

In either case, we have yet only managed to assemble a basic portrait of Psyche. It’s simply too far away to study in any great detail. Which is where 1986 DA and 2016 ED85 (another asteroid in the study) come in.

Keeping Up With the Joneses

Both 1986 DA and 2016 ED85 are classified as near-Earth asteroids. That is, they live in our neighborhood.

At some point in the past, gravitational interactions with Jupiter nudged them out of the asteroid belt and into near-Earth orbits. So, a key motivation of the study was to trace the asteroids’ lineage. Because they’re closer, we can observe them in more detail and infer the characteristics of their distant family members, including Psyche.

According to the study, spectral analysis of the asteroids, combined with orbital simulations, suggests they’re likely from one of four families in the outer asteroid belt.

“We believe that these two ‘mini Psyches’ are probably fragments from a large metallic asteroid in the main belt, but not Psyche itself,” study coauthor David Cantillo said. “It’s possible that some of the iron and stony-iron meteorites found on Earth could have also come from that region in the solar system too.”

According to the study, the two asteroids have a composition similar to Psyche. Even if it isn’t a parent, its a close relation, so they can add further clues as to Psyche’s make-up.

“We started a compositional survey of the NEA population in 2005, when I was a graduate student, with the goal of identifying and characterizing rare NEAs such as these metal-rich asteroids,” said Vishnu Reddy, who co-led the study and is a University of Arizona associate professor and principal investigator of the NASA grant that funded the work. “It is rewarding that we have discovered these ‘mini Psyches’ so close to the Earth.”

In the vision of the sci-fi novel and TV series, The Expanse, the asteroid belt is a source of raw materials for the solar system. Settlers have burrowed into dwarf planet Ceres and spun it up to provide artificial gravity for a sizable colony. Huge ships mine ice in Saturn’s rings and rock hoppers ply the belt for metal, water, and other resources.

The potential is there, but the reality is still firmly science fiction.

The dream of mining asteroids had a moment in the last decade. A number of space startups, since acquired or wound down, were aiming to kickstart a movement. The proximate vision was to mine water, not metal, to supply ships with oxygen and fuel. (Others have suggested moon mining may prove the easier feat in the near term.)

Space agencies have landed on and even returned samples from asteroids. But large-scale mining will likely depend on cheaper access to space and a viable market. Until then, we’ll be stuck in the prospecting phase.

NASA’s planned trip to Psyche is the most intriguing future mission. The spacecraft will launch in 2022 and arrive in 2026. It’s hoped the mission will provide a better sense of the asteroid’s composition, confirm whether it is indeed the core of an ancient protoplanet, and yield insights into the solar system’s violent past.

In the meantime, the cost of going to space is decreasing, and SpaceX’s Starship may yield another leap.

For now, we’ll look up and dream.