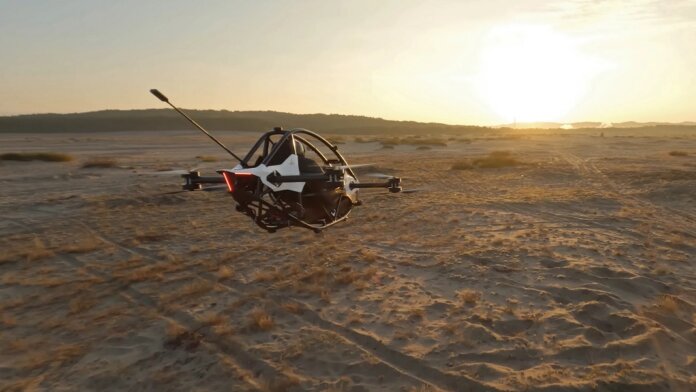 From buses to taxis to ambulances, the number and type of vehicles set to take to the skies in the allegedly near future keeps growing. Now another one is joining their ranks, and it seems to defy classification—it’s not a flying car, nor a drone; the closest to an accurate description may be a flying all-terrain vehicle, or the designation its creators have given it, which is a “personal electric aerial vehicle.” And it shares its name with a widely-beloved futuristic cartoon family: the Jetsons.

All sorts of technology that used to exist only in cartoon form has made its way into being since the show launched in 1962, from jet packs to 3D printed food to smartwatches.

Swedish startup Jetson Aero’s tiny electric aircraft, the Jetson One, is sort of like George Jetson’s “car”—except there’s only space for one person, there’s not a closed cabin, and you can’t press a button to be dropped out the bottom. You can, however, press a button to activate a ballistic parachute, but Jetson Aero is really hoping none of its customers will ever have to use this feature.

The parachute is a last-resort option, built into the Jetson One along with several other redundancies for passenger safety. The vehicle runs on battery power, with eight electric motors, and is like a helicopter in that it takes off and lands vertically (though the fact that it has eight propellers makes it a “multicopter”). The fastest it goes is 63 miles per hour (102 kilometers per hour), so about the same as highway driving in or near an urban area.

At 9.3 feet long by 8 feet tall by 3.4 feet wide, the Jetson One is quite small, at least as far as aircraft go, and weighs 198 pounds (90 kilograms). It can carry a passenger that weighs up to 210 pounds, though the lighter you are, the longer you can fly for; a pilot weighing 187 pounds can fly for 20 minutes before the vehicle’s batteries need recharging. In the US the aircraft is classified as “ultralight,” meaning you don’t need a pilot’s license to fly it.

Given its compact footprint, the vehicle could take off right from owners’ driveways; the company encourages potential customers to “make your garden or terrace your private airport.” It certainly would be nice to be able to fly without the hassle of first traveling to an airport, nor the expense of the associated storage and usage fees (though if you’re buying one of these little winged toys, those expenses probably won’t concern you too much; the Jetson One goes for $92,000, which actually isn’t outrageous given that it’s basically a personal mini plane). The downside of making your garden your personal airport, though, is that if you lose control of the vehicle or have a shaky takeoff or landing, you could go crashing right through your home’s roof or wall.

In the spirit of its widely-known compatriot company, Ikea, Jetson Aero delivers its aircraft to customers as a partially-assembled kit, accompanied by “detailed build instructions.” It’s a long shot from shelving unit to personal eVTOL, though, and letting customers assemble the vehicle themselves seems an odd choice given the risks associated with getting even one piece wrong.

Customers don’t seem worried, though. The company has already sold its entire 2022 production run (which, to be fair, was only 12 units) and is now taking orders for delivery in 2023.