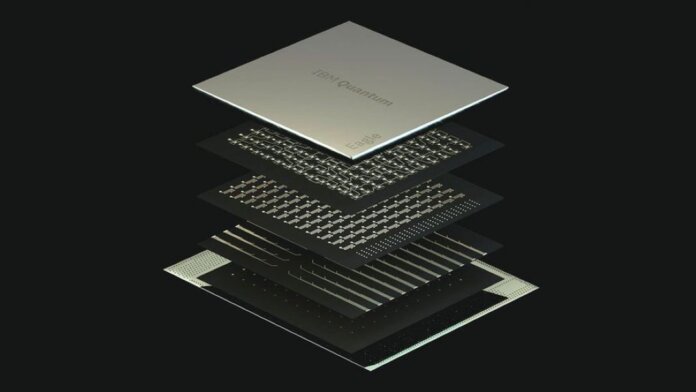 Progress in quantum computing is no longer just about how big your chip is. But IBM has taken a major leap forward with the release of a 127-qubit processor.

Milestones in quantum computing are getting increasingly difficult to assess as the variety of technologies and the yardsticks used to judge them proliferate. While both IBM and Google build their devices out of superconducting qubits, differences in the way they’re wired up mean you can’t simply compare them qubit to qubit.

Further muddying the waters, trapped-ion computers made by IonQ and Honeywell can implement quantum circuits using far fewer qubits than superconducting systems. IBM has come up with esoteric metrics like quantum volume and CLOPS to help compare notes between different technologies, but so many variables feed into a quantum computer’s performance that picking a winner is tough.

Nonetheless, more qubits is definitely a good thing. And with its latest processor IBM has nearly doubled the number it can fit on a single chip, which could allow researchers to run significantly larger and more complex circuits.

“We anticipate that, with Eagle, our users will be able to explore uncharted computational territory,” the processor’s developers wrote in a blog announcing the new chip.

To be clear, the device is still not able to provide so-called “quantum advantage”—the ability to perform tasks no conventional hardware could. But IBM says it’s the first of its processors that is so large it’s impossible to simulate the device’s quantum state on a normal supercomputer.

And building a chip with this many qubits is a significant technical feat, which IBM says will lay the groundwork for its 433-qubit Osprey processor, due in 2022, and the 1,121-qubit Condor slated for 2023. If all goes according to plan, the company thinks those devices could well start solving previously intractable problems.

“We believe that we will be able to reach a demonstration of quantum advantage—something that can have practical value—within the next couple of years. That is our quest,” IBM’s director of research, Dario Gil, told Reuters.

The key to squeezing all those qubits into one chip was a 3D packaging technique that allows control electronics and qubits to be placed on different levels. And unlike earlier processors, which required a separate set of control and readout electronics for each qubit, the new chip uses readout multiplexing to use the same kit to address multiple qubits.

The chip also uses a hexagonal layout that IBM says reduces the potential for errors by minimizing unwanted interactions between neighboring qubits. But the so-called “heavy-hex” setup does this by sacrificing connectivity between qubits, which makes implementing circuits more complicated.

How the chip actually performs has yet to be revealed. IBM told Fortune it has yet to benchmark the processor’s performance, and couldn’t say how long its qubits could maintain their quantum states or to what extent they could be entangled. This refers to a quantum phenomena where the state of multiple qubits become intertwined, which is an important source of quantum computers’ power.

IBM’s announcement was also upstaged just a day later when startup QuEra came out of stealth and announced it had built a 256-qubit device. The company’s technology relies on “neutral atoms” that are held in place and cooled to just above absolute zero by lasers. The approach is less well-developed than those being pursued by other companies, but comes with a number of benefits.

Unlike superconducting, atoms are all identical, so there’s no chance of manufacturing defects. And unlike trapped ions, they can be packed tightly together to achieve densities similar to the transistors on a late 1990s CPU. They also hold their quantum states for a long time and can become highly entangled.

QuEra’s device is a quantum simulator rather than a computer, though. That means it can be used to model certain physical phenomena, but it isn’t a general-purpose device that can run all kinds of algorithms. According to the company’s website, it is working on a fully programmable 64-qubit device that is “coming soon.”

Picking which of these announcements is the bigger deal is hard at this stage. But both demonstrate the rapid innovation and growing scale in the quantum hardware space.