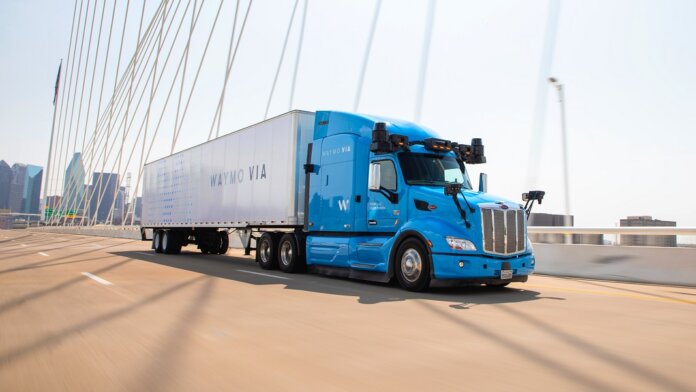 Between a supply chain full of holes, labor shortages across various sectors of the economy, and rising inflation, it’s shaping up to be a somewhat chaotic holiday season. Technology can’t fix all of these problems—or even most of them—but it can help get holiday shipments from point A to point B faster, cheaper, and without as many humans involved. Waymo’s partnership with UPS could mean some of your holiday gifts will be spending time in an autonomous truck on their way to you.

Waymo (which started out as the Google Self-Driving Car Project in 2009 and is still held by Alphabet, but raised $2.5 billion in its first outside funding round in March of 2020) first announced a partnership with UPS in January 2020, in which Waymo Driver was used to help move packages between UPS stores in Phoenix and the UPS hub in Tempe. Waymo’s Chrysler Pacifica minivans drove autonomously, but trained operators were on board to monitor the vehicles.

Last week the two companies announced an expansion of their existing partnership, saying they’ll start autonomous trial runs using Class 8 trucks equipped with the fifth-generation Waymo Driver. They’ll do deliveries for UPS’s North American Air Freight unit between facilities in Dallas-Fort Worth and Houston. Waymo’s initial route for its driverless cargo shipments also ran between Houston and Fort Worth, which the company said is one of the most highly utilized freight corridors in the country. The route is around 260 miles long, much of that a straight shot on Interstate 45.

A class 8 truck essentially means a really big truck—one with a Gross Vehicle Weight Rating (the truck’s own weight plus the maximum fuel, cargo, and passengers it can carry) over 33,001 pounds. Think cement trucks, dump trucks, or big rigs like Freightliners. The driverless fleet Waymo started testing in 2020 fit into this category, as the trucks were Peterbilt 18-wheelers (decked out with cameras, lidar, and on-board computers).

Waymo’s technology, called Waymo Driver (“the world’s most experienced driver,” if the company has its way) is considered Level 4, which means it could operate without a safety driver under certain conditions (namely, good weather). But the trucks will have two people onboard: a safety driver to take over on non-highway portions of the journey, and a software technician to monitor the autonomous mode.

Waymo opened its Dallas hub in the summer of 2020 and started testing its heavy-duty autonomous trucks on Texas roads (with safety drivers on board). The trucks weren’t carrying commercial goods, but were loaded with weights to mimic commercial loads.

Those tests must have gone well, because in June of this year Waymo announced a partnership with transportation logistics company JB Hunt to move cargo in automated trucks, also in Texas (Texas is a popular state for driverless vehicle testing due to its extensive highway systems, mild weather, large trucking industry, and a 2017 bill that allows vehicles to operate without a driver; Waymo competitor TuSimple also has a hub in Dallas).

If all goes well with the UPS trial runs, it may not be long until our holiday packages are being shuttled all the way to our homes in trucks with no drivers. If it’ll ease the current burdens the workforce and supply chain are seeing, we’ll take it.