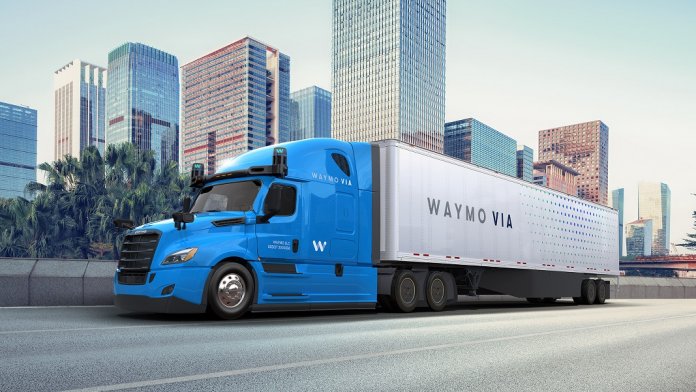 Last month, self-driving technology company TuSimple shipped a truckload of watermelons across the state of Texas ten hours faster than normal. They did this by using their automated driving system for over 900 miles of the journey. The test drive was considered a success, and marked the beginning of a partnership between TuSimple and produce distributor Guimarra. This is one of the first such partnerships announced, but TuSimple may soon have some competition from another big player in the driverless vehicles game: Alphabet Inc. subsidiary Waymo.

Yesterday, Waymo announced a partnership with transportation logistics company JB Hunt to move cargo in automated trucks in Texas. The first route they’ll drive is between Houston and Fort Worth, which Waymo claims is “one of the most highly utilized freight corridors in the country.”

At around 260 miles long, much of the route is a straight shot on Interstate 45. The trucks will have human safety drivers on board who will likely take over some of the city driving portions, but the goal is to use the automated system as much as possible. A software technician will be on board as well, which makes sense given software will be doing the bulk of the driving.

Waymo has been testing driverless trucks in Texas since last August, when it established a hub in Dallas from which to deploy its fleet of 18-wheelers, complete with cameras, lidar, and on-board computers. It’s no coincidence that the Lone Star State is getting so much driverless action; its mild climate and vast highway network make for a lot of space to drive and a lot of time throughout the year to do so—and a 2017 bill allows vehicles to operate without a driver there.

There are five levels of automation in driving, or if you count level 0 (where there’s no automation at all and a human driver is fully in control at all times), six. At Level 5—full autonomy—the vehicle can drive itself anywhere (around cities, on highways, on rural roads, etc.) in any conditions (rain, sun, fog, etc.) without human intervention.

Waymo’s technology, called Waymo Driver (“the world’s most experienced driver,” if the company has its way) is considered Level 4, which means it could operate without a safety driver under certain conditions (namely, good weather). “This will be one of the first opportunities for JB Hunt to receive data and feedback on customer freight moved with a Class 8 tractor operating at this level of autonomy,” said Craig Harper, JB Hunt’s chief sustainability officer and executive vice president.

Despite looming concerns over job losses due to automation in trucking, proponents say that not only will self-driving technology help fill an ongoing shortage of drivers, it will improve safety on roads and decrease food waste, since shipments will arrive to their final destinations faster. JB Hunt, Harper said, believes “there will be a need for highly skilled, professional drivers for many years to come,” but autonomous technologies will improve efficiency and safety.

Whether it’s TuSimple, Waymo, or other players left to enter the field (or in this case, the state of Texas), it seems we’ll soon be finding out if that’s the case.