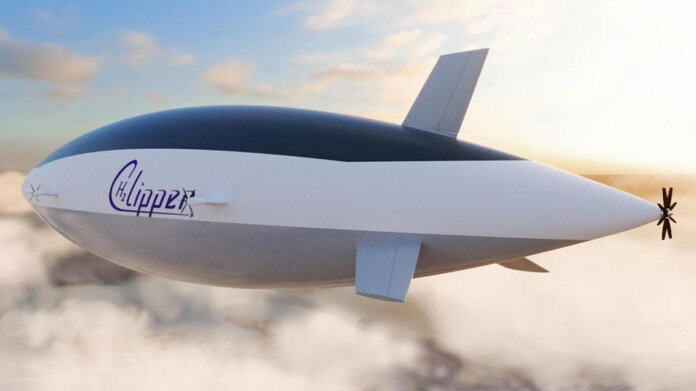 Airships might seem like a technology from a bygone era, but a startup says their new design could become a crucial cog in the green hydrogen supply chain.

While transitioning away from fossil fuels will prove crucial in our efforts to combat climate change, it’s easier said than done for some industries. While road and rail transport are rapidly electrifying, in aviation, batteries are a long way from being able to provide the weight-to-power ratio required for aviation. And even the largest batteries are still not big enough to power a container ship on long-distance crossings.

Hydrogen is increasingly being seen as a promising alternative for these hard to decarbonize sectors. It has a higher energy density than natural gas and can either be burned in internal combustion engines or combined with oxygen in a fuel cell to create electricity.

While much of today’s hydrogen is derived from natural gas and therefore not much better than fossil fuels, in theory you can also make it by using renewable electricity to power electrolyzers that split water into hydrogen and oxygen. Producing green hydrogen economically is still a huge challenge, but there are hopes that it could help wean hard to electrify sectors off polluting fossil fuels.

But transporting hydrogen remains a sticking point: Areas that are abundant in renewable energy such as sun and wind are not always close to where the hydrogen is needed. Shipping large amounts of the gas around the world will clearly be a major logistical challenge, but a start-up called H2 Clipper has an ingenious workaround.

The California company plans to build airships that simultaneously transport hydrogen and use it as a lighter-than-air gas to provide the aircraft with lift. On top of that, its airships will also use hydrogen fuel cells to power their engines.

While the project is still at the concept stage, the company says that thanks to modern aeronautical design, stronger and lighter-weight materials, and modern fabrication techniques, their airship will be faster, safer, and more efficient than its predecessors. And the company was recently selected for inclusion in an accelerator run by software major Dassault Systems.

While it won’t be as fast as a plane, the H2 Clipper will be able to cruise at about 175 mph, which would allow it to ferry cargo 7 to 10 times faster than a boat. It also has a cargo volume of 265,000 cubic feet—8 to 10 times more than most airfreighters—and can carry up to 340,000 pounds of payload 6,000 miles at its standard cruising speed.

Between distances of 1,000 to 6,000 miles, the airship could carry a ton of cargo for as little as $0.177 to $0.247 per mile—a quarter of the cost of airfreight. And because it can take off and land vertically, it can carry goods straight to where they’re needed rather than having to transfer them onto trucks at an airport.

One potential stumbling block, noted by New Atlas, is the fact that US law currently bans the use of hydrogen as a lift gas in airships. That’s perhaps not surprising, seeing as the era of the airship came to an abrupt end nearly a century ago after the hydrogen-filled Hindenburg went up in flames.

H2 Clipper deals with this issue in their FAQs, pointing out that hydrogen storage technology has undergone rigorous testing in the automotive industry thanks to hydrogen fuel cell vehicles, with no recorded explosion to date. The company says this is because hydrogen’s very fast expansion rate means that it typically disperses too quickly for an explosion to happen. Whether regulators will be convinced remains to be seen though.

The company isn’t the only one that thinks airships are due for a reboot. Earlier this year British company Hybrid Air Vehicles unveiled concept images of its forthcoming Airlander 10 aircraft, which it believes could provide a greener and more comfortable alternative to short-haul flights.

There are still many hurdles for both companies to overcome before their visions become a reality, but don’t be too surprised if you see Zeppelins passing overhead in the not-too-distant future.