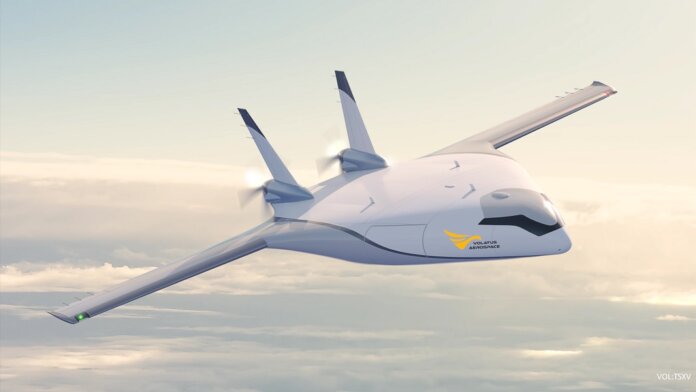 The global supply chain is currently experiencing all kinds of glitches, from material shortages to labor shortages and beyond. Moving goods from point A to point B has become more expensive, and there’s no quick fix in sight. But a San Diego-based startup plans to meet some of the demand for air freight with an innovative solution: autonomous cargo drones as big as a Boeing 747. And customers are jumping on board.

Natilus, founded in 2016, this week announced $6 billion worth of pre-orders for over 440 of its aircraft. The company says its blended wing design can fit 60 percent more cargo than existing freight aircraft while cutting costs by 60 percent and with 50 percent less carbon emissions.

Aleksey Matyushev, the company’s CEO, pointed out in a press release that moving freight by sea is 13 times cheaper than moving it by air, but takes 50 times as long. “Natilus intends to revolutionize the transport industry by providing the timeliness of air freight at an affordable cost reduction of 60 percent, making air cargo transportation substantially more competitive,” he said.

How will they do this? Much of the savings will reportedly come from the aircraft’s design.

The passenger planes we’re used to riding in, as well as many cargo planes, have a ‘tube and wing’ design, which is what it sounds like: passengers or cargo ride in a hollow tube (called the fuselage), and the attached wings are what generate lift and allow the plane to fly (sounds pretty precarious put that way, doesn’t it?).

A blended wing body design, on the other hand, merges the wings and the fuselage, meaning the body is much wider and flatter than that of traditional passenger planes. Until now, blended wing body aircraft have primarily been used for military purposes, but aircraft manufacturers and NASA are starting to look into expanding the planes’ uses and coming up with new prototypes.

Part of why passenger aircraft use the tube and wing design is because it’s easier to pressurize said tube, and while sitting in a narrow seat packed in next to 200-some other narrow seats isn’t the most comfortable thing ever, it works; we board the plane, put our stuff above our heads or at our feet, sit stiffly for several hours, then wait impatiently to file out upon landing.

The tube and wings configuration doesn’t make as much sense for cargo, though; it’s mostly moved in rectangular pallets, and if you picture a sort of aircraft tetris, packing 3D rectangles into a cylinder isn’t a very efficient use of space. With a blended wing body design, the interior of the aircraft can have a rectangular cross section, utilizing far more of the available volume. From the outside, it looks a lot like an airborne version of a manta ray.

Natilus says its aircraft will improve interior space utilization even more, as they’re designed around cargo and have a diamond-shaped bay that rotates the cargo area 45 degrees. “From a freight perspective, it makes a lot of sense,” said Matyushev. “It has 50 percent more volume internally, so it doubles the amount of revenue cargo per flight. With conventional designs you start to run out of volume before you maximize the takeoff weight of the airplane.”

The plane’s exterior shape is also more aerodynamic, which will allow it to go faster while burning less fuel.

Though the aircraft will be made for autonomous flight, they’ll initially operate with oversight from remote pilots until regulations allow for full autonomy. They’ll be able to use existing ground infrastructure and standard air cargo containers. The company plans to make 4 different aircraft: a 3.8-ton payload short-haul plane, a 60-ton payload medium/long-range plane, and 100- and 130-ton payload long-range planes.

Some of the customers that recently pre-ordered aircraft from Natilus include Kenyan cargo airline Astral Aviation, drone services provider Volatus Aerospace (slated in the first production slot for a 3.8-ton plane), and freight forwarding company Flexport.

To date, Natilus has completed two wind tunnel tests to validate its aircraft, and is planning for the first flight of a full-scale prototype to take place in 2023.