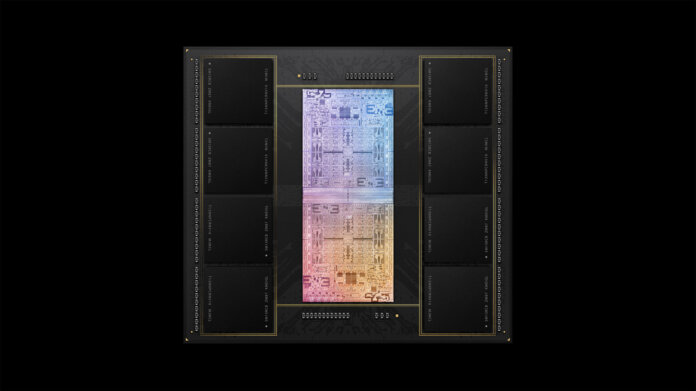 How Apple’s Monster M1 Ultra Chip Keeps Moore’s Law Alive
Will Knight | Wired
“Apple’s most powerful chip to date has 114 billion transistors packed into over a hundred processing cores dedicated to logic, graphics, and artificial intelligence, all of it connected to 128 gigabytes of shared memory. But the M1 Ultra is in fact a Frankenstein’s monster, consisting of two identical M1 Max chips bolted together using a silicon interface that serves as a bridge. This clever design makes it seem as if the conjoined chips are in fact just one larger whole.”

Behind Mark Zuckerberg’s Big Plans for AR Glasses
Alex Heath | The Verge
“Zuckerberg calls AR goggles a ‘holy grail’ device that will ‘redefine our relationship with technology,’ akin to the introduction of smartphones. …Employees are racing to deliver the first generation [of Facebook’s AR goggles] by 2024 and are already working on a lighter, more advanced design for 2026, followed by a third version in 2028.​​ The details, which together give the first comprehensive look at Meta’s AR hardware ambitions, were shared with The Verge by people familiar with the roadmap who weren’t authorized to speak publicly.”

This Startup Wants to Get in Your Ears and Watch Your Brain
Steven Levy | Wired
“For years, people have been shifting from tracking their health through sporadic visits to a doctor or lab to regularly monitoring their vitals themselves. The NextSense team is gambling that, with a gadget as familiar as an earbud, people will follow the same path with their brains. Then, with legions of folks wearing the buds for hours, days, and weeks on end, the company’s scientists hope they’ll amass an incredible data trove, in which they’ll uncover the hidden patterns of mental health.”

Russian Hackers Tried to Bring Down Ukraine’s Power Grid to Help the Invasion
Patrick Howell O’Neil | MIT Technology Review
“The hackers attempted to destroy computers at a Ukrainian energy company using a wiper, malware specifically designed to destroy targeted systems by erasing key data and rendering them useless. The impact remains unclear. Ukrainian officials say they thwarted the attack, which they say was intended to support Russian military operations in eastern Ukraine. If successful, the hack would have caused the biggest cyber-induced blackout ever.”

An mRNA Vaccine Boost May Help CAR T-Therapy Treat Solid Cancers
Angus Chen | Stat
“While CAR T-therapy has cured some people with blood cancers, this form of immunotherapy has so far produced lackluster results for solid tumors like lung or kidney cancer. But a new early-phase clinical trial presented on Sunday at the American Association for Cancer Research (AACR) conference suggests that CAR T-cells may be able to shrink some solid tumors—as long as it gets a boost from an mRNA vaccine from BioNTech.”

‘No Easy Feat:’ Daring Helicopter Rocket-Catch Attempt Set for Next Week
Passant Rabie | Gizmodo
“Rocket Lab will launch its Electron rocket from New Zealand’s Māhia Peninsula, carrying 34 small satellites from commercial operators like Alba Orbital, E-Space, and Unseenlabs. But on its way back, the rocket booster hopefully won’t stick the landing, instead a helicopter will catch it mid-air with a customized Sikorsky S-92, a large twin engine craft normally used to transport oil and gas or for search and rescue operations, according to Rocket Lab.”

Driverless Car Appears to Flee the Scene After Being Pulled Over by Cops
Jonathan M. Gitlin | Ars Technica
“San Francisco police stopped one of Cruise’s autonomous Chevrolet Bolt EVs, likely because the car’s headlights were not on despite it being night. In the video, first posted to Instagram on April 2, an officer can be heard saying, ‘There’s nobody in it.’ But a few seconds later, after the officer walks back to his police car, the autonomous vehicle—perhaps deciding that the traffic stop was over—tries to drive away before pulling over to a stop a few hundred feet away.”

Can Computers Learn Common Sense?
Matthew Hutson | The New Yorker
“Oren Etzioni, the CEO of the Allen Institute for Artificial Intelligence, in Seattle, told me that common sense is ‘the dark matter’ of AI.’ It ‘shapes so much of what we do and what we need to do, and yet it’s ineffable,’ he added. …If computer scientists could give their AI systems common sense, many thorny problems would be solved. …Such systems would be able to function in the world because they possess the kind of knowledge we take for granted.”

Aging Clocks Aim to Predict How Long You’ll Live
Jessica Hamzelou | MIT Technology Review
“The big idea behind aging clocks is that they’ll essentially indicate how much your organs have degraded, and thus predict how many healthy years you have left. Among the hundreds of aging clocks developed in the last decade, though, accuracy varies widely. And researchers are still grappling with a vital question: What does it mean to be biologically young?”

North Korea Pulled Huge $600 Million Crypto Heist, Feds Say
Monica J. White | Digital Trends
“Lazarus is a state-sponsored group of hackers, and this isn’t the first time we’ve heard about their attacks. According to Chainalysis, the group stole at least $400 million worth of digital assets in 2021. However, this means that the 2022 Axie Infinity hack is a huge escalation, seeing as the group managed to steal over $600 million in one go.”

MIT Engineers Built a Robot for Emergency Stroke Surgeries
M. Moon | Engadget
“The team, which has published its paper in Science Robotics, has now presented a robotic arm that doctors can control remotely using a modified joystick to treat stroke patients. That arm has a magnet attached to its wrist, and surgeons can adjust its orientation to guide a magnetic wire through the patient’s arteries and vessels in order to remove blood clots in their brain. Similar to in-person procedures, surgeons will have to rely on live imaging to get to the blood clot, except the machine will allow them to treat patients not physically in the room with them.”