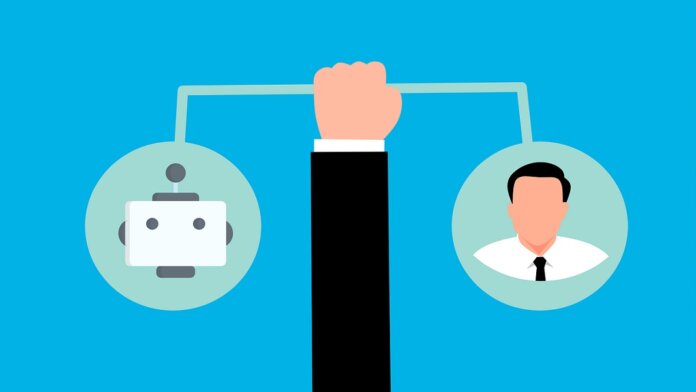 As AI and robotics continue to advance, there are concerns that machines could soon replace humans in a wide range of occupations. Now there’s a new way to tell how likely your job is to be taken over by robots or AI, and what job to shift to if you are at risk.

Industrial robots have been a fixture on manufacturing lines for decades, but they have generally been dumb and dangerous, incapable of operating outside of highly controlled environments and liable to injure human workers unless safely caged.

Advances in AI are starting to change that though, with more nimble and aware robots starting to move from factories and warehouses into storefronts and restaurants. Social distancing requirements due to the Covid-19 pandemic have only accelerated this trend, fueling anxiety that an increasing number of human workers may end up getting displaced by robots.

There have been plenty of studies aimed at predicting which jobs are most at risk from AI and robotics, but now Swiss researchers have gone a step further. In addition to ranking the jobs most at risk of automation, they have also devised a method for at-risk workers to identify jobs less likely to be automated that are already a good fit for their existing skills.

“The key challenge for society today is how to become resilient against automation,” study co-lead Rafael Lalive, from the University of Lausanne, said in a press release. “Our work provides detailed career advice for workers who face high risks of automation, which allows them to take on more secure jobs while re-using many of the skills acquired on the old job.”

Workers losing out to automation is not a new phenomenon. As the researchers note in a paper published in Science Robotics, the mechanization of agriculture and automation of manufacturing led to significant changes in the structure of the workforce. But they point out that this time around, these changes may be far more disruptive.

While previous waves of automation primarily affected low-skill jobs, the rapidly improving capabilities of machines mean that medium and high-skill occupations are increasingly at risk. The pace of progress also means that jobs may change far faster than before, opening up the prospect that workers will have to retrain and acquire new skills multiple times throughout their lifetimes.

To identify those jobs most at risk of being replaced by robots, the team first created a list of robotic abilities borrowed from the European H2020 Robotics Multi-Annual Roadmap, which is produced by a collaboration between the European Union and the robotics industry. They then scoured research papers, patents, and descriptions of commercially available robots to determine how mature each of the robotic abilities were.

These were then matched up to human capabilities outlined in the Occupational Information Network (O*NET) dataset, which includes details on nearly 1,000 job profiles. By assessing how many of the skills required to do a particular job can be done by a robot, or could be in the distant future, the team could work out what occupations are most at risk of automation.

This was used to rank the roughly 1,000 jobs in O*NET, with manual jobs like meatpacker most at risk and cognitively demanding ones like physicist safe for the foreseeable future. Unlike previous research though, the team then developed a way to work out what the smartest job transitions would be for at-risk workers.

By computing the similarity of the requirements in two jobs, the researchers were able to come up with a measure of how much effort it would take for workers to retrain. They then combined this with each job’s risk of automation to identify the easiest job for a worker to shift to without the danger that the new occupation will also soon become redundant.

The researchers say the method could help governments tailor their retraining policies and could also help at-risk workers make smarter choices about career changes. They’ve even created a website where people can check whether their job is in danger and what might be the best alternatives for them.

Writing in an accompanying commentary, Andrea Gentili from the University of International Studies in Rome points out that the job description data used by the researchers is limited and the comparison of human and robotic abilities is still somewhat coarse. Nonetheless, he says, the approach they have taken is an innovative contribution that could go a long way to help workers transition to jobs less at risk of automation.