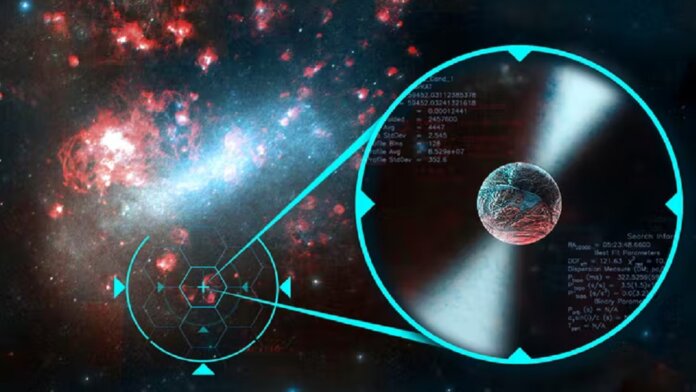 When a star explodes and dies in a supernova, it takes on a new life of sorts.

Pulsars are the extremely rapidly rotating objects left over after massive stars have exhausted their fuel supply. They are extremely dense, with a mass similar to the sun crammed into a region the size of a large city.

Pulsars emit beams of radio waves from their poles. As those beams sweep across Earth, we can detect rapid pulses as often as hundreds of times per second. With this knowledge, scientists are always on the lookout for new pulsars within and outside our Milky Way galaxy.

In research published this week in the Astrophysical Journal, we detail our findings on the most luminous radio pulsar ever discovered outside the Milky Way.

This pulsar, named PSR J0523-7125, is located in the Large Magellanic Cloud—one of our closest neighboring galaxies—and is more than ten times brighter than all other radio pulsars outside the Milky Way. It may be even brighter than those within it.

There are more than 3,300 radio pulsars known. Of these, 99 percent reside within our galaxy. Many were discovered with CSIRO’s famous Parkes radio telescope, Murriyang, in New South Wales.

About 30 radio pulsars have been found outside our galaxy, in the Magellanic Clouds. So far we don’t know of any in more distant galaxies.

Astronomers search for pulsars by looking for their distinctive repeating signals in radio telescope data. This is a computationally intensive task. It works most of the time, but this method can sometimes fail if the pulsar is unusual: such as very fast, very slow, or (in this case) if the pulse is very wide.

A very wide pulse reduces the signature “flickering” astronomers look for, and can make the pulsar harder to find. We now know PSR J0523-7125 has an extremely wide beam, and thus escaped detection.

The Large Magellanic Cloud has been explored by the Parkes telescope several times over the past 50 years, and yet this pulsar had never been spotted. So how were we able to find it?

Pulsar beams can be highly circularly polarized, which means the electric field of light waves rotate in a circular motion as the waves travel through space. Such circularly polarised signals are very rare, and usually only emitted from objects with very strong magnetic fields, such as pulsars or dwarf stars.

We wanted to pinpoint unusual pulsars that are hard to identify with traditional methods, so we set out to find them by specifically detecting circularly polarized signals.

Our eyes can’t distinguish between polarized and unpolarized light. But the ASKAP radio telescope, owned and operated by Australia’s national science agency CSIRO, has the equivalent of polarized sunglasses that can recognize circularly polarized events.

When looking at data from our ASKAP Variables and Slow Transients (VAST) survey, an undergraduate student noticed a circular polarized object near the center of the Large Magellanic Cloud. Moreover, this object changed brightness over the course of several months: another very unusual property that made it unique.

This was unexpected and exciting, since there was no known pulsar or dwarf star at this position. We figured the object must be something new. We observed it with many different telescopes, at different wavelengths, to try and solve the mystery.

The object couldn’t be a star, as stars would be visible in optical and infrared light. It was unlikely to be a normal pulsar, as the pulses would have been detected by Parkes. Even the Gemini telescope didn’t provide an answer.

Ultimately we turned to the new, highly sensitive MeerKAT radio telescope in South Africa, owned and operated by the South African Radio Astronomy Observatory. Observations with MeerKAT revealed the source is indeed a new pulsar, PSR J0523-7125, spinning at a rate of about three rotations per second.

Below you can see the MeerKAT image of the pulsar with polarized “sunglasses” on (left) and off (right). If you move the slider, you’ll notice PSR J0523-7125 is the only bright object when the glasses are on.

Our analysis also confirmed its location within the Large Magellanic Cloud, about 160,000 light years away. We were surprised to find PSR J0523-7125 is more than ten times brighter than all other pulsars in that galaxy, and possibly the brightest pulsar ever found.

What New Telescopes Can Do

The discovery of PSR J0523-7125 demonstrates our ability to find “missing” pulsars using this new technique.

By combining this method with ASKAP’s and MeerKAT’s capabilities, we should be able to discover other types of extreme pulsars, and maybe even other unknown objects that are hard to explain.

Extreme pulsars are one of the missing pieces in the vast picture of the pulsar population. We’ll need to find more of them before we can truly understand pulsars within the framework of modern physics.

This discovery is just the beginning. ASKAP has now finished its pilot surveys and is expected to launch into full operational capacity later this year. This will pave the way for even more discoveries, when the global SKA (square kilometer array) telescope network starts observing in the not-too-distant future. 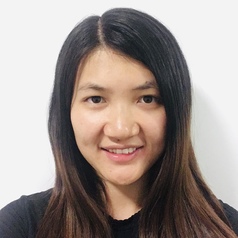 Yuanming Wang
I am a PhD student (astrophysics) at the University of Sydney from 2019.
RELATED