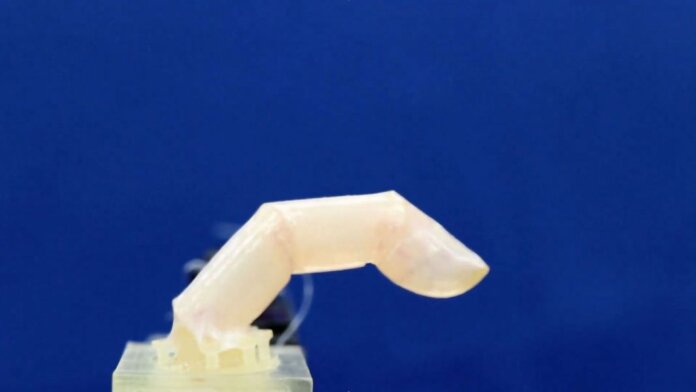 Androids that are part human, part robot are a staple of science fiction. But they’re now a step closer to reality after researchers crafted a living skin for robots out of human cells.

Today’s robots, even if humanoid in form, tend to feature rigid parts and hard plastic or metal exteriors. While some now come with silicon rubber coatings that mimic the appearance of skin, it’s still far from convincing, and they often look more like animated mannequins than humans.

This might seem like only a cosmetic issue, but there are reasons why it might be helpful to have robots that more closely resemble us. For a start, it could make it easier for people to interact with robots more naturally in situations where building some kind of rapport is important, such as healthcare or customer services.

Human skin is also an incredibly powerful organ—it’s full of sensors that are far more sophisticated than those we can engineer; it’s tough and water-repellent; and it’s even able to heal itself when damaged. Giving robots all of these capabilities could significantly expand the repertoire of tasks they could help us with.

That’s why Japanese researchers decided to see if they could use tissue engineering techniques to create a covering for a robotic finger made out of human skin cells. The resulting “living skin” was found to tightly conform to the finger and hold in place when the joints flexed, and was also both water-repellent and self-healing.

“Our creation is not only soft like real skin but can repair itself if cut or damaged in some way,” study leader Shoji Takeuchi from the University of Tokyo said in a statement. “So we imagine it could be useful in industries where in situ repairability is important as are human-like qualities, such as dexterity and a light touch.”

So-called “human skin equivalents” that are engineered from human cells and structural biomaterials like collagen have been used in research and for skin grafts for years. But they have primarily been grown in two-dimensional sheets, and getting them to create or conform to 3D structures has been difficult.

In a recent paper in Matter, Takeuchi and his colleagues outline a new method in which a rigid robotic finger is submerged in a collagen hydrogel that contained human dermal fibroblasts, the main cell type found in the connective tissue of skin. This coating was then allowed to develop, during which time the fibroblasts spread throughout the collagen and caused the gel to shrink.

This caused the coating to tightly adhere to the robotic finger, essentially creating a primer coat that the researchers could then seed with epidermal keratinocytes, the most common kind of cells in the outermost layer of human skin, the epidermis.

After this outer layer had been given time to develop, the researchers carried out a series of experiments to test out its characteristics. They showed that it was elastic enough for the finger to flex without tearing, and that it was also water repellent, just like real skin. They even showed that it could heal itself if a collagen sheet was grafted over the site of the wound.

The living skin is still a long way from the real thing, though. For a start, it has no blood supply, which means it needs the researchers to constantly deliver fresh nutrients and remove waste products. It is also missing many of the components that make human skin so powerful, such as sweat glands, hair follicles, and the vast array of sensors that allow us to detect things like pressure and heat.

The researchers say this is just a starting point, and they plan to expand the functionality and sophistication of their living skin. Beyond making robots look more like us, the researchers think their line of research could have implications for the future of advanced manufacturing. At present robots struggle with tasks that require a high degree of dexterity, but giving them more human-like manipulators could help automate some of these tasks.

It’s likely to be some time before the researchers are able to mimic all of the capabilities of skin, let alone create full-body coverings from robots. But this research suggests androids might not be such a fanciful idea anymore.