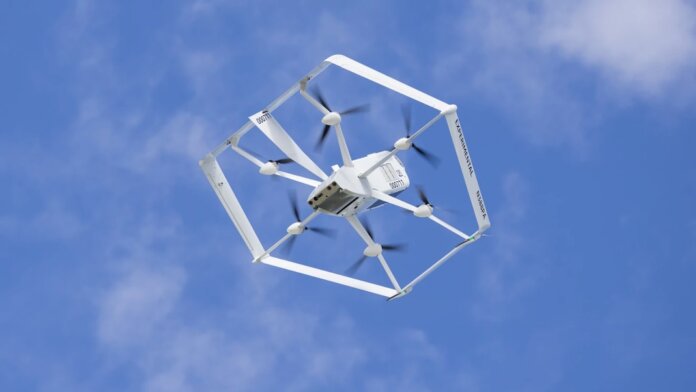 The number of packages people order—and the number of people ordering packages—isn’t likely to go down anytime in the foreseeable future, and companies are working on ways to get those packages delivered quickly and cheaply. Too many delivery trucks cause traffic and congestion; you’ve doubtless seen the Amazon, FedEx, or UPS trucks take over loading zones on your block for an annoyingly long time (I sure have).

All sorts of wacky solutions have been proposed for better package delivery, from an underground “hyperloop” network of pipes to swarms of last-mile robots dispatched from mothership vans.

Let’s not forget ever-elusive delivery drones. The widespread assumption was that Amazon would be the first to have its packages take to the skies, but as it turned out, Walmart beat them to the punch, piloting drone delivery in North Carolina in 2020.

Now Amazon’s catching up. The company announced this week that it’s starting drone delivery service in Lockeford, California later this year. South-east of Sacramento in the state’s hot, dry Central Valley area, the town had a population of just 3,521 as of the 2020 census. An Amazon press release says the town has “historic links” to the aviation industry thanks to a former resident who built and flew planes there in the early 1900s.

The company doesn’t give additional details around why it chose Lockeford for the Prime Air pilot, though the town’s rural location, the fact that most customers there have backyards for the drones to drop packages in, and the lack of numerous obstacles you’d find in a more urban or densely-populated area likely all factored in.

Amazon has been trying to get drone delivery off the ground (pun intended) since 2013, when then-CEO Jeff Bezos went on 60 Minutes and demoed a drone he claimed could deliver packages weighing five pounds or less in under 30 minutes. Since then, the company has cycled through various iterations of delivery drones (more than two dozen, according to the press release), from a quadcopter that carried packages in its fuselage to a helicopter/airplane hybrid to its current hexagonal model, whose propellers were designed to minimized high-frequency sound waves.

The company’s progress on bringing its delivery drones to market has been slow due to safety concerns—including multiple crashes—and regulatory approvals. In fact, Prime Air is still waiting for Part 135 certification from the Federal Aviation Administration, which allows companies to operate commercial delivery drones.

On the safety front, among other measures, Amazon has built what it calls an “industry-leading sense-and-avoid system” to keep its drones from crashing into things—things like other aircraft, people, pets, or unexpected obstacles (like, say, a chimney or an antenna). When a drone’s sensors detect objects within a certain radius of it, it automatically changes course, and as it descends to drop packages, it checks that the surrounding space is clear.

Customers in Lockeford will know when placing their Amazon orders whether a given package will arrive by drone or by truck, as specific items will be marked as “Prime Air eligible.” Amazon will use feedback from Lockeford residents to improve and expand the service in coming years. The company hasn’t announced a specific date or month for the pilot’s launch yet, but says it’s happening before the end of the year.