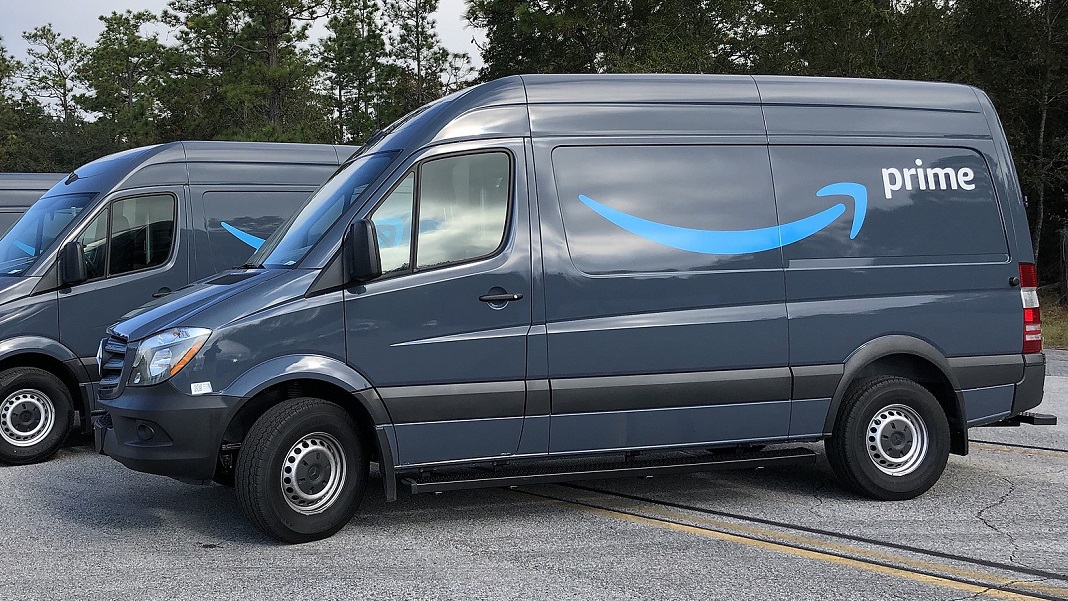 Amazon’s taking over the world. Or, at least, the US. Even as Jeff Bezos steps down as CEO and hands the reins over to former AWS head Andy Jassy (and Bezos himself gets ready to go to space), the e-commerce giant is projected to account for more than 40 percent of all online sales in the country by the end of this year.

Not surprisingly, the company is continuously exploring new ways to streamline its operations and cut costs. Last week a patent application that Amazon filed earlier this year became public. It’s for a delivery system that, if it comes to pass, would bring a new technology to neighborhoods where Amazon is popular (which, as implied above, is most of them).

What if, instead of the delivery people in Amazon uniforms you see frantically dashing from one home to the next, their trucks double-parked with the blinkers on, you saw this: an Amazon truck pulls up near your home and, most likely, still double-parks and puts the blinkers on (I mean, some things don’t change, and traffic congestion in cities isn’t going away anytime soon). But rather than the driver’s door opening and a person jumping out to start getting boxes where they need to be, the rear of the truck opens and a ramp is lowered to the pavement.

Down that ramp roll several smaller vehicles, maybe similar to the Kiwi delivery robots seen ferrying food to students in Berkeley a couple years ago. These small vehicles disperse, each one making its way to a different house or building within a one-to-two-block radius. They roll up to peoples’ doorsteps, deposit a package, then faithfully return to the mothership.

Once all the small delivery bots are back on board, the truck (which would have a human driver in the near future but likely be autonomous in the less-near future) drives off to the next block—its fleet of mini-me’s restocking with new packages en route—and the scene repeats itself.

Cool/creepy? Good/bad? Depends on your perspective. On the one hand, employing fewer humans would bring Amazon more cost savings in the long run, which it would ideally pass on to customers and re-invest in other parts of the business, leading to hiring more people in a virtuous circle.

But on the other hand, it’s not hard to imagine the secondary vehicles going awry; there would be plenty of obstacles for them to get around (dogs, bikes, sprinklers, and children are just a few that come to mind), and given how hard it’s been to bring self-driving cars to market, Amazon may be underestimating the challenge of maneuvering the small delivery vehicles even 100 feet from truck to doorstep.

The secondary vehicles wouldn’t self-navigate, but would be directed by an elaborate sensor-and-camera system inside the primary truck, which would send directions to the delivery bots over WiFi or Bluetooth.

Besides the potential technical challenges, there could be more immediate physical challenges posed by the very same group this elaborate delivery system was designed to serve: people. Unruly, impatient, lazy, occasionally idiotic people. Let’s face it, we don’t have the greatest track record of treating small things on wheels nicely (not sure how the electric scooter rollout went in your city, but in mine it wasn’t pretty), so you can imagine the fates that might await some unsuspecting secondary delivery vehicles just trying to do their jobs.

Though the patent application focuses mainly on ground-based vehicles, it’s not hard to imagine these eventually being replaced by drones. It’s definitely creepier to visualize a swarm of drones being dispatched from a truck than some cute boxes-on-wheels, but flight would help a lot in avoiding those problematic obstacles (and people).

In any case, despite the patent application, the new delivery system remains pure conjecture at this point, and may never end up being rolled out. But even if it’s not, we can be pretty sure Amazon will come up with an equally innovative solution to meet growing demand; despite the company having some tall hurdles ahead, its success seems unlikely to flag.