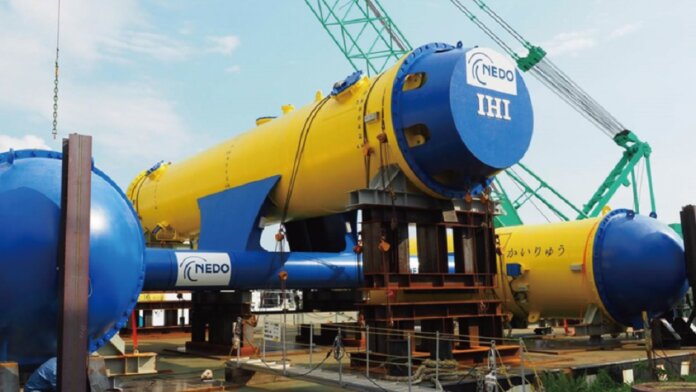 A little over a year ago, a Scottish company called Orbital Marine Power was getting a two-megawatt tidal turbine up and running in the North Sea. The system was expected to generate enough electricity to power around 2,000 Scottish homes and offset 2,200 tons of CO2 annually.

Meanwhile, a similar ocean turbine called Kairyu was already in the water off the coast of Japan, undergoing a three-year trial to harness the power of deep ocean currents. The trial was deemed a success, and detailed in a report published by Bloomberg recently.

Ocean turbines are essentially an underwater version of wind turbines, functioning much the same way; the movement of water—whether from tides or currents—turns blades that are attached to a rotor, turning the rotor and powering a generator.

The biggest tidal power plant in the world is Sihwa Lake station in South Korea, which has a capacity of 254 megawatts (MW), followed by a 240MW station in La Rance, France (this is also the world’s oldest tidal plant, built between 1961-1966).

Both these plants use what’s called a barrage, which is a long underwater wall (the barrage at the La Rance plant, for example, is 476 feet long) with gates that open and close with the tides in a way that capitalizes on their energy production potential. This setup works well for generating high quantities of power with multiple turbines; Sihwa Lake has 10 turbines and La Rance has 24.

Kairyu works a little differently. The 330-ton turbine is designed to harvest energy from ocean currents (as opposed to tides). The system is made up of three connected cylindrical pods. The middle pod, which sits several feet higher than those on either side, holds a connector for the power transmitter as well as a device to adjust buoyancy—that is, to enable the array to move to deeper or shallower water and thus capitalize on variations in the current’s strongest spots.

The pods on either side both have turbine blades on one end that are 36 feet long, and they rotate in opposite directions to stabilize the generator’s position underwater. They also each contain a generator, a controller, and various measurement instruments.

Kairyu will be anchored to the seafloor, with its pods floating about 160 feet below the water’s surface. The system will sit along the Kuroshio current, one of the largest ocean currents in the world. It starts east of the Philippines and flows north-east past Taiwan and Japan. Oceanographer Steven Jayne described it as “the strongest current in the Pacific Ocean, and also one of the most intense air-sea heat exchange regions on the globe. It influences climate as far as North America.”

The current flows at a rate of 2.5 meters (8.2 feet) per second, and Kairyu’s trial period showed that the tidal turbine system could steadily generate 100 kilowatts of power (50 per turbine unit) with a rate flow speed of three knots (that’s about 3.45 nautical miles per hour). Because ocean currents don’t change speed or direction much, systems like Kairyu could generate power some 70 percent of the time versus more intermittent sources like onshore wind (29 percent) and solar (15 percent). Japan’s New Energy and Industrial Technology Development Organization estimates this current could generate up to 200 gigawatts of reliable energy.

Being an island nation, it seems only logical that Japan should harness ocean currents for energy; according to Ken Takagi, a professor of ocean technology policy at the University of Tokyo Graduate School of Frontier Sciences, there’s more potential for ocean current turbine power than offshore wind in the area. “Ocean currents have an advantage in terms of their accessibility in Japan,” he told Bloomberg. “Wind power is more geographically suited to Europe, which is exposed to predominant westerly winds and is located at higher latitudes.”

The Japanese are hoping power from the ocean will be a significant contributor to the country’s renewable energy stock and help it meet its net zero carbon emissions target by 2050. Building the submerged transmission lines that will carry the energy Kairyu generates to the grid will be no small project, but the tidal turbine is expected to be up and running in the next decade.