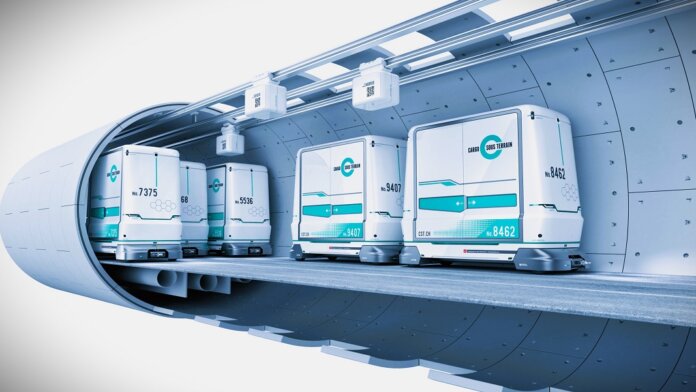 In the thick of the Covid-19 pandemic, economies around the world all but ground to a halt. Production scaled back, roads went quiet, airports were deserted, and pollution plummeted. Meanwhile, e-commerce surged as people turned to the internet for their shopping needs. Though the pandemic has receded, consumer shopping habits appear permanently altered, and the volume of goods being transported within and between cities doesn’t look set to drop anytime soon.

In short, we’re buying so much stuff that it’s becoming hard to get that stuff where it needs to be without undue negative impacts on infrastructure, transit networks, traffic, and ultimately, quality of life. People aren’t going to stop buying stuff, so how can we plan for a future where there’s more stuff being moved and our streets aren’t overwhelmingly clogged with semis and delivery vans (and the polluting emissions that come with them)?

A Swiss company has an idea—one that’s pretty original, a bit wacky, and maybe excessive. Or maybe it’s brilliant; you be the judge.

Underground cargo is the concept. It’s also, as it were, the name: Cargo Sous Terrain. In a network of subterranean tunnels, large pods ferry pallets of goods between various hubs. The pods are automated and electric, able to pick up and drop off loads from designated points, and the network would run constantly, like a conveyor belt in a factory.

A conveyor belt is an apt comparison not only because of Cargo Sous Terrain’s constant movement, but because of its relatively slow speed; many newfangled delivery and logistics systems emphasize getting goods from point A to point B as quickly as possible, whether we’re talking drone delivery, robot swarms, or an underground network of PVC pipes that whooshes packages to your neighborhood in 30 seconds.

CST’s focus is more on constancy than speed, though not coincidentally, the two would end up going hand in hand; rather than getting a single big delivery every day or two, businesses would have a steady flow of goods coming in. The idea is for the pods to move at a constant speed of 30 kilometers per hour (about 18 miles per hour), “around the clock.” The pods would travel on wheels and have an electric drive with induction rails.

Though 18 miles per hour isn’t fast, the never-at-rest nature of the system means it would require a substantial amount of energy to operate. The company has thus far been light on sharing plans for energy usage, saying only that the system would be operated with 100 percent renewable energy, and would result in reduced emissions compared to conventional cargo transport. It’s possible they’d set up their own solar panels or wind turbines, though the intermittent nature of these sources means there would need to be a backup baseload power supply.

Cargo transport accounts for a significant portion of the traffic in urban areas, and in Switzerland specifically, the volume of goods transport is predicted to increase by up to 37 percent from 2010 to 2040. Since, as the company’s website notes, “unlimited expansion of the transport infrastructures is not possible,” it seems an innovative solution is needed; CST estimates its system would reduce heavy goods traffic on Swiss roads by up to 40 percent.

If what we need is to get vehicles off roads, does it make more sense to shift transit of goods underground rather than transit of people? In the US, it’s going to be difficult if not impossible to wean Americans off our car-dependent lifestyles, partly because we’re so used to the convenience of having our own vehicles, but also because our cities aren’t built around public transportation the way many European cities are. Maybe it would make sense here as well to take the cargo off roads and make more room for humans (Elon Musk would argue otherwise, as his Hyperloop aims to do just the opposite—but we’ll see if any of these ever reach completion).

In Switzerland, meanwhile, planning is underway for the first section of CST’s subterranean transport network; it will run 70 kilometers (43 miles) from the Härkingen-Niederbipp hub to Zurich, and is slated to be operational by 2031. The estimated cost (including software, physical hubs—of which there would be 10 along this line—and underground and overground vehicles) is three billion Swiss Francs.