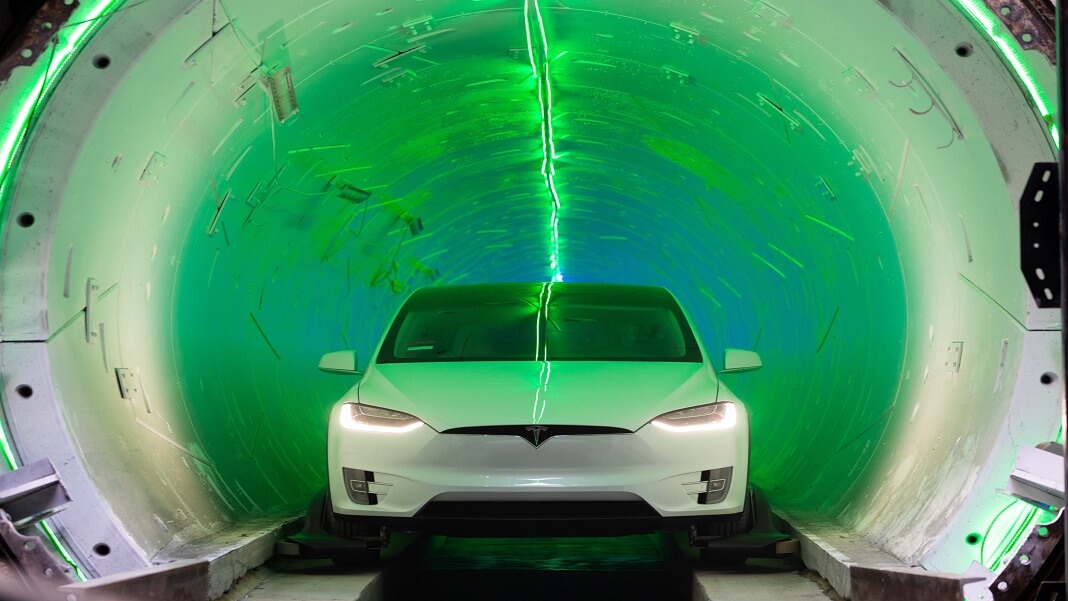 Last month I attended the Consumer Electronics Show (CES) in Vegas. I had a list of all the tech I wanted to see, talk to someone about, or try for myself, and I spent two days speed-walking between buildings and booths, scrambling to cram it all in: a 360-degree hologram, an exosuit, a flying taxi, haptic gloves—I didn’t want to miss any of it.

By the end of each day, my legs and feet ached—and I hadn’t come close to seeing everything I wanted to. I’m not a step-counter, but other attendees claimed to be walking several thousand steps more than their daily averages.

If Elon Musk’s new project pans out, next year’s CES will look totally different, for me and all the other (175,000+) attendees—and it will involve a lot less walking.

Last week, Musk’s Boring Company finished excavating the first of two tunnels for a new transportation system that will run underneath the Las Vegas Convention Center (LVCC). The second tunnel will run parallel to the first, creating a loop to carry people back and forth in modified Tesla Model 3 and Model X cars.

There will be one station at the convention center’s south hall, another between the central and north halls, and a third at the west hall, which is currently under construction. It takes about 15 minutes to walk from one hall to another (more if there are super-cool things like Avatar concept cars to see along the way). According to Musk, the underground cars will move at speeds up to 155 miles per hour, taking people between stations in just one minute.

The Las Vegas Convention and Visitors Authority awarded a $48.7 million contract to the Boring Company last year; it’s the company’s first commercial contract, and they’re required to test the system for three months before opening it for public use. Their goal is to move a whopping 4,000 vehicles per hour.

It took three months to excavate the first tunnel, with work taking place 40 feet underground. Musk hopes to eventually expand the transit system to other parts of Las Vegas, including the Strip and the airport, and even to have a connecting tunnel running all the way to Los Angeles; LA residents may one day be able to hop over to Vegas for an afternoon (or Vegas residents go catch a glimpse of the ocean for a few hours).

Musk has a similar project planned in Chicago, where his company won a contract to build a high-speed transit system between the city center and O’Hare airport, which are 16 miles apart. That trip will allegedly take 12 minutes at speeds up to 150mph.

That sort of speed makes a little more sense when you’re covering a longer distance (though 16 miles is still not terribly far). But when the total distance you’re going is under a mile—the completed Vegas tunnel is slated to be 4,300 feet long—how do you accelerate from 0 to 155mph then decelerate back down to 0? This would require one heck of an engine, some super-strong brakes, and an enormous amount of energy. For such a short distance, it seems like 60mph, or even 30, would be plenty fast.

No matter the speed, though, tech like exosuits and haptic gloves may be left in the dust at next year’s CES, with its shiny new transit system taking over as one of the convention’s main attractions—and attendees’ step counts back down to their typical daily averages.