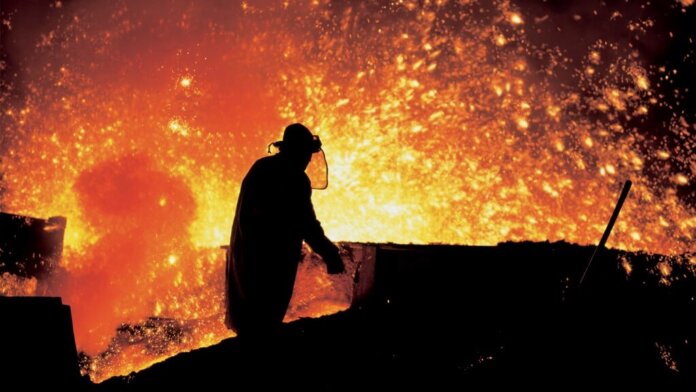 In the city of Woburn, Massachusetts, a suburb just north of Boston, a cadre of engineers and scientists in white coats inspected an orderly stack of brick-sized, gunmetal-gray steel ingots on a desk inside a neon-illuminated lab space.

What they were looking at was a batch of steel created using an innovative manufacturing method, one that Boston Metal, a company that spun out a decade ago from MIT, hopes will dramatically reshape the way the alloy has been made for centuries. By using electricity to separate iron from its ore, the firm claims it can make steel without releasing carbon dioxide, offering a path to cleaning up one of the world’s worst industries for greenhouse gas emissions.

An essential input for engineering and construction, steel is one of the most popular industrial materials in the world, with more than 2 billion tons produced annually. This abundance, however, comes at a steep price for the environment. Steelmaking accounts for 7 to 11 percent of global greenhouse-gas emissions, making it one of the largest industrial sources of atmospheric pollution. And because production could rise by a third by 2050, this environmental burden could grow.

That poses a significant challenge for tackling the climate crisis. The United Nations says significantly cutting industrial carbon emissions is essential to keeping global warming under the 1.5 degrees Celsius mark set under the 2015 Paris climate agreement. To do so, emissions from steel and other heavy industries will have to fall by 93 percent by 2050, according to estimates by the International Energy Agency.

Facing escalating pressure from governments and investors to reduce emissions, a number of steelmakers—including both major producers and startups—are experimenting with low-carbon technologies that use hydrogen or electricity instead of traditional carbon-intensive manufacturing. Some of these efforts are nearing commercial reality.

“What we are talking about is a capital-intensive, risk-averse industry where disruption is extremely rare,” said Chris Bataille, an energy economist at IDDRI, a Paris-based research think tank. Therefore, he added, “it’s exciting” that there’s so much going on all at once.

Still, experts agree that transforming a global industry that turned over $2.5 trillion in 2017 and employs more than 6 million people will take enormous effort. Beyond the practical obstacles to scaling up novel processes in time to reach global climate goals, there are concerns about China, where over half the world’s steel is made and whose plans to decarbonize the steel sector remain vague.

“It’s certainly not an easy fix to decarbonize an industry like this,” said Bataille. “But there’s no choice. The future of the sector—and that of our climate—depends on just that.”

Modern steelmaking involves several production stages. Most commonly, iron ore is crushed and turned into sinter (a rough solid) or pellets. Separately, coal is baked and converted into coke. The ore and coke are then mixed with limestone and fed into a large blast furnace where a flow of extremely hot air is introduced from the bottom. Under high temperatures, the coke burns and the mixture produces liquid iron, known as pig iron or blast-furnace iron. The molten material then goes into an oxygen furnace, where it’s blasted with pure oxygen through a water-cooled lance, which forces off carbon to leave crude steel as a final product.

This method, first patented by English engineer Henry Bessemer in the 1850s, produces carbon-dioxide emissions in different ways. First, the chemical reactions in the blast furnace result in emissions, as carbon trapped in coke and limestone binds with oxygen in the air to create carbon dioxide as a byproduct. In addition, fossil fuels are typically burned to heat the blast furnace and to power sintering and pelletizing plants, as well as coke ovens, emitting carbon dioxide in the process.

As much as 70 percent of the world’s steel is produced this way, generating nearly two tons of carbon dioxide for each ton of steel produced. The remaining 30 percent is almost all made through electric arc furnaces, which use an electrical current to melt steel—largely recycled scrap—and have far lower CO2 emissions than blast furnaces.

But because of the limited scrap supply, not all future demand can be met this way, said Jeffrey Rissman, an industry program director and head of modeling at the San Francisco-based energy and climate policy firm Energy Innovation. With the right policies in place, recycling could supply up to 45 percent of global demand in 2050, he said. “The rest will be satisfied by forging primary ore-based steel, which is where most emissions come from.”

So “if the steel industry is serious” about its climate commitments, he added, “it will have to fundamentally reshape the way the material is made—and do so fairly quickly.”

The Hybrit method instead extracts the oxygen using fossil-free hydrogen gas. The gas is created through electrolysis, a technique that uses an electric current—in this case, from a fossil-free energy source—to separate water into hydrogen and oxygen. (Most pure hydrogen today is made with methane, which produces CO2 when burned.) The resulting sponge iron then goes into an electric arc furnace, where it’s eventually refined into steel. The process releases only water vapor as a byproduct.

“This technology has been known for a while, but it’s only been done in the lab so far,” said Mikael Nordlander, head of industry decarbonization at Vattenfall. “What we are doing here is to see if it can work at [the] industrial level.”

Last August, Hybrit reached its first milepost: SSAB, which produces and sells the end product, delivered its first batch of fossil-free steel to the automaker Volvo, which used it in vehicle prototypes. It is also planning a plant for commercial-scale production, which it aims to complete by 2026.

Another Swedish venture, H2 Green Steel, is developing a similar commercial-scale hydrogen steel plant with the help of $105 million raised from private investors and companies including Mercedes-Benz, Scania, and IMAS Foundation, an organization linked to Ikea. The company plans to begin production by 2024 and produce 5 million tons of zero-emissions steel annually by the end of the decade. Other companies testing hydrogen-powered steelmaking include ArcelorMittal, Thyssenkrupp, and Salzgitter AG in Germany; Posco in South Korea; and Voestalpine in Austria.

Electricity can also be used to reduce iron ore. Boston Metal, for example, has developed a process called molten oxide electrolysis, in which a current moves through a cell containing iron ore. As electricity travels between both ends of the cell and heats up the ore, oxygen bubbles up (and can be collected), while iron ore is reduced into liquid iron that pools at the bottom of the cell and is periodically tapped. The purified iron is then mixed with carbon and other ingredients.

“What we do is basically swapping carbon for electricity as a reducing agent,” explained Adam Rauwerdink, the company’s senior vice president of business development. “This allows us to make very high-quality steel using way less energy and in fewer steps than conventional steelmaking.” As long as power comes from fossil-free sources, he added, the process generates no carbon emissions.

He said the company, which currently runs three pilot lines at its Woburn facility, is working to bring its laboratory concept to the market, using $50 million raised last year from an investor group including Breakthrough Energy Ventures, backed by Bill Gates, and the German carmaker BMW. A commercial-scale demonstration plant is expected to be up and running by 2025.

“I feel all these solutions have their place, depending on location, resource availability, and targeted product,” said Sridhar Seetharaman, a professor of materials science and engineering at Arizona State University. “However I do not think for now any one alone will give you a silver bullet to meet the demand.”

“Hydrogen has a bit of a head start being based on an established system and it’s also ahead in commercialization,” said Bataille, the IDDRI energy economist. “But achieving a net-zero steel industry will take more carbon-free pathways, so I think there will be enough room in the market for all of them in the end.”

Although greener steelmaking processes appear to be gaining momentum, there remain a number of serious challenges to confront. Chief among them is the massive expansion in renewable energy infrastructure that an industry-wide shift to these new methods would entail, said Thomas Koch Blank, senior principal at the Colorado-based nonprofit Rocky Mountain Institute. He estimates that the world would need up to three times the currently installed solar and wind energy sources to electrify the existing primary steel production.

Another barrier is cost. Switching to electricity or hydrogen would require vast amounts of capital spending to erect new plants and retrofit old ones. In the case of the clean hydrogen method, the price tag for steel will increase largely because steel producers are located close to low-cost coking coal rather than low-cost hydrogen, pointed out Koch Blank. “These upfront costs will likely drive up the price of both steel and the end products, at least in the beginning.”

According to Rissman, the analyst in San Francisco, legislation on both the supply and the demand side could help offset those higher costs and encourage more investment in greener technologies. Governments, he said, could incentivize the use of low-carbon steel for building and infrastructure by requiring state-funded projects to use low-carbon versions of designated construction materials. They could also enforce policies that make it more expensive to buy from countries where rules on emissions are less stringent. That will help domestic producers “stay competitive” as the market for clean steel “grows and new production processes achieve economies of scale,” said Rissman.

Perhaps the biggest roadblock is China, where about 90 percent of steel production is achieved using blast furnaces. In September 2020, President Xi Jinping announced that the country aims to become carbon neutral by 2060. In a bid to reduce pollution from domestic steel mills, which account for roughly 15 percent of the nation’s overall carbon emissions, Beijing has also pledged to achieve peak steel emissions by 2030. Even so, 18 new blast-furnace projects were announced in China just in the first six months of 2021, according to the Helsinki-based research group Center for Research on Energy and Clean Air.

Steel is one of the most important and challenging industries to decarbonize, said Rissman, so global coordination on it would help greatly.

Back in Boston, Rauwerdink, surveying Boston Metal’s factory lines, agreed. “It’s a fantastic challenge that we’re up against,” he said. But, he added, “We are showing that solutions exist—and work.”

This article was originally published on Undark. Read the original article. 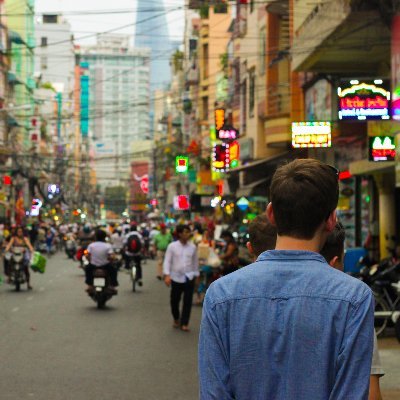 Marcello Rossi
Marcello Rossi is a freelance science and environmental journalist based in Milan, Italy. His work has been published by Al Jazeera, Smithsonian, Reuters, Wired, and Outside among other outlets.
RELATED