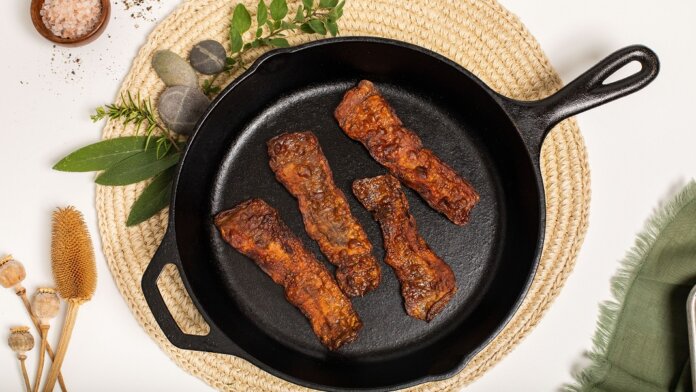 Ask meat eaters and most would likely agree that one of the carnivorous delights non-meat-eaters are most missing out on is bacon. Salty, smoky, chewy, delectable on sandwiches, crumbled up in recipes, or eaten by hand—there’s really nothing like it.

Except now there is, according to startup MyForest Foods and its customers in New York and Massachusetts. The clincher? The vegetarian-friendly bacon substitute is made from mushroom roots.

Mushroom roots are technically called mycelium, which isn’t the sort of root you’d see attached to most plants or trees; rather, it’s a root-like structure of fungus composed of a mass of branching, thread-like strands called hyphae. The hyphae absorb nutrients from soil or another substrate so the fungus can grow.

In recent years, entrepreneurs have started using mycelium as a base for all sorts of materials, from biodegradable packaging to vegan leather to biomedical scaffolds. MyForest Foods is actually an offshoot of founder Eben Bayer’s first startup, Ecovative, which has been around since 2007 and produces mycelium for use in things like packaging and clothes.

Mycelium is a viable ingredient both because it’s easy to manipulate—the nutrients in the substrate it’s grown on can be tweaked to yield different properties, like making it stiffer or more flexible—and because it grows fast; an 18-by-2-by-12-inch sheet that’s dense enough to weigh a couple pounds can grow in a week.

A batch of the mycelium MyForest Foods is using to make its bacon grows in 12 days. Last month the company announced the opening of a vertical farm near Albany, New York where it plans to grow around three million pounds of mycelium a year, enough for a million pounds of imitation bacon.

The growth process starts in tall silos, not unlike those used to store grain, where a “slurry” of moist wood chips is prepared. They’re transferred to indoor stacks of trays, not unlike those used in vertical farms that grow leafy greens, to act as the substrate the mycelium grows on. Except unlike leafy-greens-growing farms, this one doesn’t use LED lights, as the optimal growing conditions for mycelium are humid and dark.

12 days after depositing mushroom cells on their wood chip substrate, the mycelia are ready to be “harvested”—they grow in blocks, which are run through slicers to yield strips the same size and shape as bacon. “We sort of trick the mushroom to form these, basically, sheets of mushroom flesh,” Bayer told Axios. “So rather than forming a mushroom, we get a 50-foot-long, 4-foot-wide, 2-inch-thick slab of mushroom meat.”

The strips get salt, sugar, coconut oil, beet juice, and liquid smoke added to them, and presto—they’re ready to be packaged and sold as MyBacon. Consumers can cook the bacon in a pan on the stove, just like the real thing, though possibly with more frequent flipping. An Axios reporter who sampled the final product called it “delicious, if not exactly like the real deal.” A Future Foodie writer said “The components of bacon were all there: it was crispy, smokey, umami-flavored with a slightly fleshy texture that was reminiscent of meat.”

MyBacon was already available at a co-op in Albany (which consistently sold out of the product, according to the company), but as of last month it’s also available at two natural-food markets in Massachusetts. The company’s goal is to serve its meatless product to more than a million consumers by 2024, and not just vegetarians—they hope to entice carnivores to switch over too.

That may be a tall order, but even if mushroom bacon is half as delicious as the real thing, consumers will likely be willing to give it a shot—especially knowing that it’s easier on animals and on the planet.