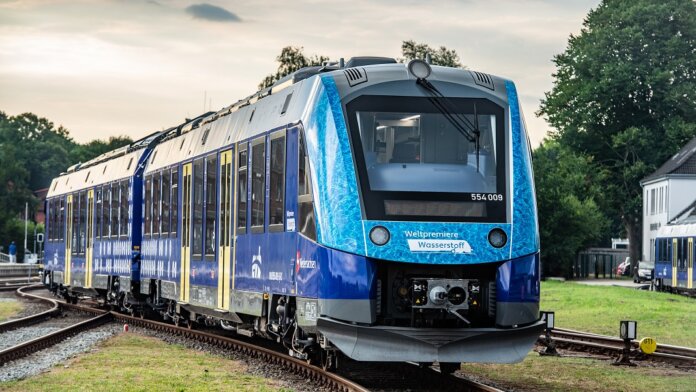 The push to move away from combustion engines and toward electric vehicles is getting stronger, with US states and multiple countries banning the sale of gas cars after a certain date, providing tax incentives to go electric, or both. But personal vehicles are just one (albeit significant) part of the equation. Public transit will need to be greened as well. Germany has taken a step toward this imperative by getting the world’s first hydrogen-powered trains up and running.

Testing of the trains started four years ago, and their initial implementation date was meant to be in 2021. The pandemic squashed that timeline, but late last month Alstom, the French company making the trains, announced the start of passenger service.

Five Coradia iLint trains started carrying passengers in August, and nine more will replace the diesel trains currently running on a route in Bremervörde, Lower Saxony by the end of this year.

The only byproducts from the trains’ operation are steam and water; any heat created is used to help power their heating and air conditioning systems. They have a range of 1,000 kilometers (621 miles), meaning they can run on a single tank of hydrogen for a full day. Their maximum speed is 140 kilometers per hour (87 miles per hour), but their average speeds are lower than this.

Hydrogen is a promising but complicated source of power. Its energy density is almost three times that of gasoline on a mass basis, but on a volume basis it’s far less dense, meaning it needs to be compressed to get more energy from the same volume. 1 kilogram of hydrogen fuel can power a train for the same amount of time and distance as around 4.5 kilos of diesel.

While hydrogen fuel itself burns clean, it’s really only as green as the electricity generation source used to produce it. The method currently used to generate most hydrogen is natural gas reforming, which does emit CO2.

A hydrogen filling station for the trains is being run by German chemical company Linde. It has 64 high-pressure storage tanks, 6 hydrogen compressors, and 2 fuel pumps. The refueling process gives hydrogen a major advantage over battery-powered transport—namely, it’s fast, just like pumping gas or diesel into a tank. Though the Coradia iLint runs primarily on hydrogen from fuel cells, it also has lithium-ion batteries on board to store extra energy.

Just like electric vehicles are quieter than gas cars (for better and for worse), the hydrogen trains are reportedly much quieter than their combustion-engine counterparts.

Given that there are more than 4,000 diesel-powered trains running in Germany alone, converting just 14 of them to hydrogen seems like a drop in the bucket. It’s a start, though, and there are plans for the trains to expand to other parts of Germany and Europe: Frankfurt has ordered 27 trains for its metropolitan area, France intends to deploy 12, and the northern Lombardy region of Italy is starting with 6.