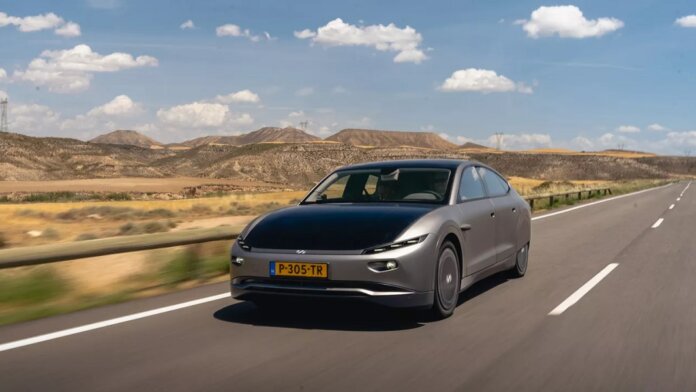 Last month, California became the first US state to ban the sale of combustion-engine cars after 2035. But its transition to electric vehicles will probably be tricky. The state’s electrical grid is experiencing instability even without the extra demand that will come from EVs; earlier this month, for example, parts of the Bay Area narrowly avoided rolling blackouts during a record-breaking heatwave.

But what if electric cars didn’t need to plug into the grid to charge, cutting out the middle man and getting power straight from the sun? Aptera has had a solar car in the works for a couple years, and now another company says its hybrid solar-powered vehicle is ready for production.

Dutch startup Lightyear recently raised $81 million, and plans to put it towards getting its Lightyear 0 into customers’ waiting hands. The company was founded in 2016 by a team of engineers after they participated in the Bridgestone World Solar Challenge, a solar-car race in the Australian outback. Six years later, Lightyear has not only developed its first vehicle, it has reportedly pre-sold 150 of them at a price of €250,000.

The car has a 60 kilowatt-hour battery pack with 4 electric motors, and its exterior surface is decked out with 5 square meters (53.8 square feet) of “double curve solar arrays.” The 174-horsepower engine can reportedly take the car from 0 to 62 miles per hour in 10 seconds.

Lightyear says that when it’s fully charged the vehicle has a range of more than 600 miles, and in optimal sun conditions can power itself for up to 40 miles a day. If you live in a very sunny area and only drive a couple dozen miles each day, you could conceivably go weeks or even months without having to plug the car in.

The car’s design is much more similar to what we’re used to cars looking like than the Aptera (which is also slated to start production this year). And the interior boasts its own set of planet- and user-friendly features, from plant-based leather and fabrics made from recycled bottles to phone-as-key capability and automatic software updates.

The company is planning to produce just under 1,000 of the vehicles to start, or maybe total. “Because Lightyear 0 is intended as a technology demonstrator, we will produce it in limited quantities,” Lightyear’s head of PR and communication Rachel Richardson told TechCrunch. The model will only be available to countries in the European Union, Norway, and Switzerland.

In conjunction with producing the Lightyear 0, though, the company’s also developing a lower-cost successor called the Lightyear 2. They’re aiming to bring this model to market by 2025 at a much-lower starting price of €30,000, and say they’ve already received 10,000 reservations from leasing and car-sharing companies.

Richardson pointed out that consumers aren’t going to rush to buy solar cars until they’re a bit more financially accessible, and even then, adoption will likely be limited to geographically logical places—that is, regions that get a lot of sun. “The industry needs to be certain of the viability of the technology to produce it at scale,” she said. “This is our aim with Lightyear 0—to show that clean mobility is a reality and it is ready, it is not a thing of the future.”