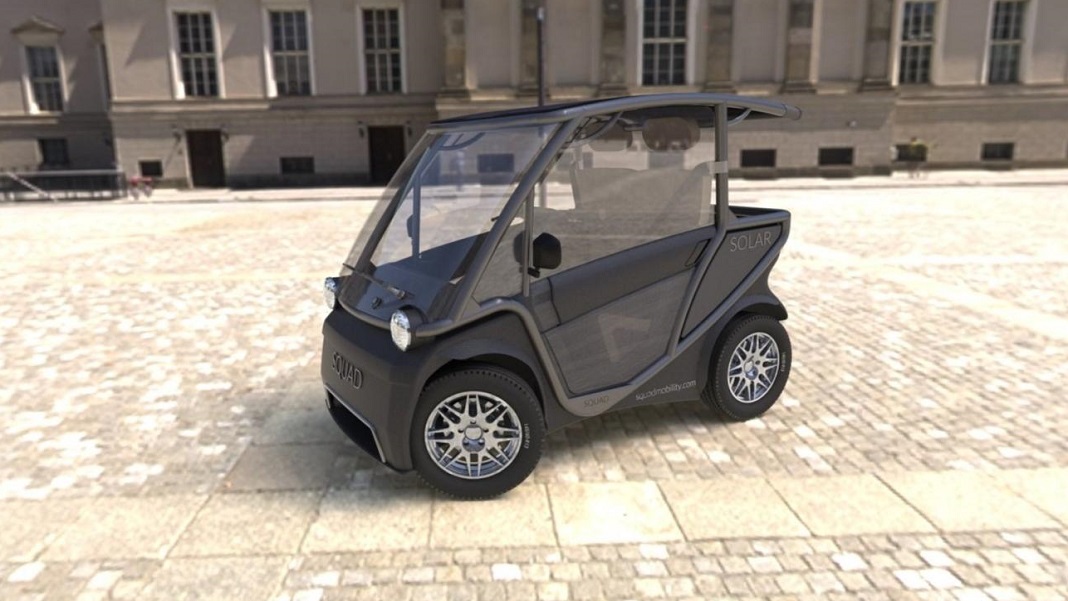 In December of last year, a California-based startup called Aptera Motors started taking pre-orders for an electric car that’s partly solar powered. The Aptera has a unique, streamlined design, just three wheels, and a price tag of $25,900 to $44,900. As of this month, it also may have a new competitor—though the similarities between the two seem to end after the solar panels.

A Dutch startup called Squad Mobility has begun taking pre-orders for a vehicle it’s calling the Squad car (kind of an odd choice of name, particularly because the car could hardly look more different from those used in law enforcement). It’s a tiny two-seater made for city driving only, with a max speed of 28 miles per hour.

“Tiny” in this case really does mean very small; at 2 meters long by 1.2 meters wide (6.5 feet by 4 feet), it cuts a couple feet off the dimensions of its next-smallest-of-kin, the SmartForTwo (which is 8.8 feet long by 6.2 feet wide). Three of the cars can fit easily in a typical parking space, or four if you really squeeze them in.

Charged just on sun for a full day, the car can drive up to 12 miles, more than enough for most city errands and even for short commutes (say, to a business district from an adjacent urban neighborhood). The first caveat that springs to mind for any solar-powered thing is the inconsistency of sunshine; what do you do when it’s cloudy?

But Squad Mobility claims that even in countries that aren’t known for being the sunniest—like the Netherlands—the car can get enough solar power for its intended use, and doesn’t require full sun to charge. If there’s not enough sun or you need to drive farther than 12 miles, the car has a battery that can be charged at a regular wall outlet.

The company’s website points out that driving a Squad car requires neither a driver’s license nor a helmet, a claim that’s a bit counter-intuitive and sounds like a recipe for injury. The closest vehicle that comes to mind is a golf cart, which goes similar speeds and also doesn’t require a license or a helmet (but is meant to be driven on golf courses not city streets). At 28 miles per hour you can’t do that much damage—but what about the non-Squad cars on the road?

It’s worth noting that although electric cars are being touted as one solution to our growing climate change problem, they may not be all they’re cracked up to be in terms of cutting emissions. As a New York Times op ed noted earlier this year, the problem with electric cars is that, well, they’re still cars. They will still require an energy source, whether it’s renewable or not (and getting to 100 percent renewable is unlikely to happen along the timelines governments are laying out. If it did, it would come with high costs to consumers in some cases).

As a senior economist at the Institute for Energy Research noted last year, “Electric cars might not have emissions at a tailpipe, but they do have emissions at the power plant.” Cars that run on sunshine and leapfrog the grid altogether are, of course, an exception—but vehicles like the Squad and the Aptera are just a start. Solar technology will need to advance significantly before we see widespread use of it in cars.

Squad Mobility is making it easy for people to join the low-cost electric car-owner club. Europeans can reserve one for 50 euros, and would-be customers outside Europe can put down just 5 euros (though there’s no estimated date for when production of the cars will start outside the EU). In Europe, production is slated to start in the last quarter of 2022.