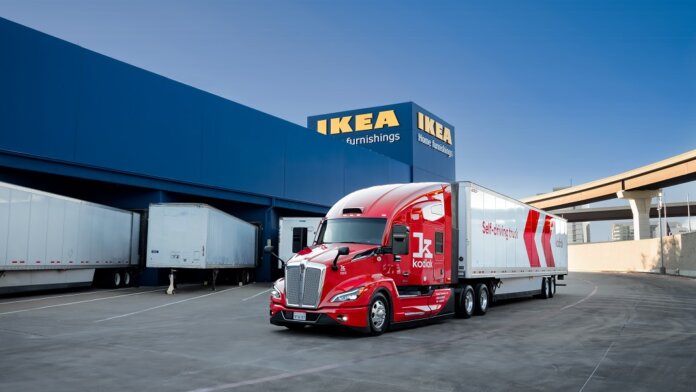 Thanks to its mild climate, expansive highway network, and lax regulations, Texas has become the country’s proving ground for driverless trucks. From cargo to produce, goods have been traveling the state’s highways partially driver-free (the trucks aim to use autonomous mode on highways, but safety drivers take over to navigate city streets) for a couple of years already. Now there’s another type of cargo traveling through Texas via autonomous trucks: furniture. This week Kodiak Robotics announced a partnership to transport IKEA products using a heavy-duty self-driving truck.

Kodiak has been moving furniture and other IKEA goods since August, but the companies carried out a testing period before making the agreement public. The route runs from an IKEA distribution center in Baytown, east of Houstin, to a store in Frisco, 290 miles away just north of Dallas. It’s mostly a straight shot on highway 45.

Like the self-driving trucks that’ve come before it, the vehicle has a safety driver on board. He or she picks up loaded trailers at the distribution center in the morning and provides driving help where needed, reaching the store by late afternoon; it’s about a five-hour drive in a car, so a bit more in a heavy-duty truck.

Kodiak has been around since 2018, and is focused on building a technology stack specifically for long-haul trucks. They use a modular hardware approach that includes easy-to-install “mirror pods” with lidar and cameras. The company has autonomous freight delivery partnerships in place with CEVA Logistics and U.S. Express, and in August announced an agreement with Pilot Companies to develop services for self-driving trucks at Pilot and Flying J travel centers. The services will include inspections, maintenance, refueling, data offloading, and load pickups and drop-offs, with the first “autonomous truckport” to be built near Atlanta.

Kodiak believes its technology can improve road safety and long-haul drivers’ working conditions. “Kodiak’s technology will contribute towards our objective to put the driver in focus in the transition towards automated transportation and towards our road safety agenda,” said Dariusz Mroczek, Category Area Transport Manager for IKEA’s supply chain operations, in a press release.

There’s been a shortage of long-haul truck drivers for years, and it’s not showing signs of getting better. Like pretty much everything else, the pandemic threw a wrench into trucking jobs. For one, lockdowns caused training and testing for new drivers to grind to a halt. The closure of restaurants and other facilities made it harder for drivers to find places to eat, rest, or shower. And supply chain issues resulted in longer waits for drivers at warehouses, time for which they don’t get paid but can’t avoid putting in.

Unsurprisingly, many left their jobs during the pandemic, and they haven’t returned. Proponents of autonomous trucking say that not only will it help bridge some of the driver supply-demand gaps, it will make long-haul jobs a bit less strenuous; for example, the tech may not be quite to the point of drivers being able to nap during long stretches of highway, but could get there eventually. Even being able to sit back and keep an eye on the road with slightly less alertness could give drivers a break from the grind of hours at the wheel.

Kodiak’s founder and CEO Don Burnette hopes the IKEA pilot will lead to a long-term relationship between the two companies, and an expansion of delivery routes for the furniture store. “Up until now we’ve primarily been working with other carriers who work on behalf of shippers as their customers, and this is the first time we’re working with a shipper directly,” Burnette told Forbes. “It was a really good opportunity to build that relationship and understand their operational needs.”