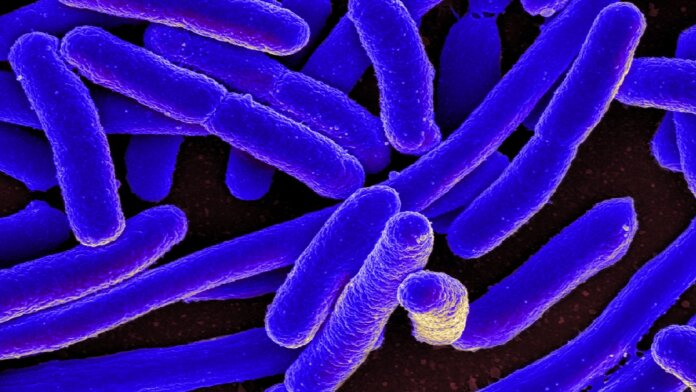 A nightmare scenario keeps synthetic biologists up at night. A strain of bacteria with an extensively revised genetic code leaks out of the lab. A part of its genetic machinery transfers to an unsuspecting host—allowing it to co-opt the host cell to reproduce, even if it means harming the host.

The bacteria wasn’t engineered to harm. Rather, it had its genetic machinery tweaked to resist infections from dangerous viruses. The super-powered bacteria could now pump out life-saving drugs, such as insulin, without worries of contamination.

The plot here is completely fictional. But it illustrates the double-edged sword that comes with the promise of synthetic biology, which builds upon a genetic programming language common to nearly all living creatures.

On one hand, hijacking and editing the existing genetic code can endow even the simplest cells with new abilities, transforming them into micro drug factories or cellular computers.

On the other, because organisms share the same universal code, they’re vulnerable to outside attacks from viruses and other pathogens—and can transfer their new capabilities to natural organisms, even if it kills them.

Why not build a genetic firewall?

A recent study in Science did just that. The team partially reworked the existing genetic code into a “cipher” that normal organisms can’t comprehend. Similarly, the engineered bacteria lost its ability to read the natural genetic code. The tweaks formed a powerful language barrier between the engineered bacteria and natural organisms, isolating each from sharing genetic information with the other.

Translation? The engineered bacteria are now resistant to even the most aggressive viruses, with little chance of leaking their synthetic code into the wild. Dubbed refactoring, the process effectively quarantines synthetic organisms from the natural world.

“We have created a form of life that doesn’t read the canonical genetic code and that writes its genetic information in a form that can’t be read,” said Dr. Jason Chin at the Medical Research Council Laboratory of Molecular Biology in Cambridge, who led the study.

The language of life is surprisingly simple. We have four DNA letters—A, T, C, and G. For genes to impact life, they must be translated into proteins, which are made up of 20 different amino acids.

There’s a whole cellular manufacturing process to make this happen. Imagine a DNA strand as a cassette tape ribbon around a spool. In comes a messenger—mRNA—that copies the genetic message (like making a mix tape) and shuttles it to the protein-making factory inside the cell.

Here, a myriad of different workers translate the genetic code into amino acids. The crux is the rule of three: three DNA letters grouped together as a codon correspond to an amino acid. Transporter molecules, aptly called tRNAs, then read the code—say, TCG—and grab onto the corresponding amino acid. Rinse and repeat, and eventually the cell makes a long chain of proteins ready to be further processed into its final 3D structure.

But here’s the thing. DNA letters form 64 different codons—yet we only have 20 amino acids. Something doesn’t add up.

The reason is that our genetic code is redundant. For example, the codons TCG, TCA, AGC, and AGT all code for the same amino acid. Can we streamline the genetic code, freeing up “extra” codons for other proteins?

Back in 2021, Chin’s group showed the answer is yes. In a technological tour-de-force, his team rewrote over 18,000 codons in E. coli bacteria—a workhorse for biotechnology and research—and showed the new life form lived and divided happily, but with newly freed codons ready for programming. The team then cleaned house, removing tRNAs that previously “read” the now-defunct codons.

In several tests, the super-powered strain, dubbed Syn61.Δ3(ev5), fought off a myriad of viruses that need to hijack the cell’s genetic machinery to replicate. Because the cell couldn’t read the viruses’ standard genetic code, it was no longer susceptible to the invaders.

Or so they thought.

In a recent preprint, synthetic biologists Drs. George Church and Akos Nyerges at Harvard University found that Syn61.Δ3 isn’t as invincible as it first seemed.

Dousing the bacteria with viruses isolated from multiple sources—pig manure and scrapings from a chicken shed—they found roughly a dozen viruses that could still penetrate the bacteria’s genetic defenses.

Why? A group of insidious suspects are mobile genetic elements—more commonly known as “selfish genes.” These hopping bits of genetic code can come from viruses and bacteria, and are also embedded inside our own genome.

Because they are DNA code, these elements can encode tRNAs inside a cell. If a virus harbors these selfish genes, it could open a biological “back door” to infect a virus-resistant cell like Syn61.Δ3, replenishing a lack of appropriate tRNAs with its own copy for replication. This ability renders “a genetic-code-based firewall ineffective,” explained Nyerges and colleagues.

Chin agrees. In the new paper, he took a different strategy—actively sabotaging the delivery of the amino acid serine, instead replacing it with alternatives. It’s like finding-and-replacing the letter “s” in a book and changing it to “p” or “a.” The result is completely unreadable to a normal cell, but opens up a world of possibilities for an engineered one.

In all, “we can independently re-assign” two codons to four different amino acids, the authors said, creating 16 new genetic codes. To help the cell read its new code, the team also programmed a slew of tRNAs that help redirect amino acid traffic. These engineered tRNAs can overcome the natural genetic code, instead delivering the programmed amino acid—rather than the naturally correct one—to build a protein.

These genetic tweaks make the Syn61.Δ3 bacteria strain even more alien. In essence, it now has a genetic code based on—but massively divergent from—that of any living creature.

The upgrade comes with major perks. Bacteria are normally extremely chatty fellows, easily sharing their genetic material. The process, dubbed horizontal transfer, is a terrible headache for synthetic biologists, as their engineered gene elements could theoretically escape into the wild.

The new super strain, however, could neither share nor decode normal genes from natural bacteria. In experiments using mobile genetic elements—the “selfish genes” known to easily spread—natural and engineered cells couldn’t transfer the genetic code. In a way, the team had programmed a new genetic language in the synthetic strain, severing its communications with natural organisms.

The edits also made the new strain invincible to viruses. Here, the team first scanned the River Cam in Cambridge for viruses that can elude the original strain’s genetic protections. Two strains were particularly vicious, carrying their own tRNAs that can overcome previous genetic protections in cells.

Adding just a synthetic version of these viral tRNAs allowed otherwise non-infectious viruses to invade Syn61.Δ3, the authors said. But the new strain was completely immune against a myriad of viruses, easily shutting down selfish genes.

Chin isn’t the only group interested in engineering the next invincible cell. In their preprint, Nyerges and Church used a similar strategy to recode Syn61.Δ3 so that serine was replaced with another amino acid. In preliminary tests, their strain could battle off a dozen viruses that overwhelmed the original strain.

Resisting viruses is just the first step for genetic refactoring. Scientists have long thought that the process could create organisms with new properties, said Chin and colleagues. “The strategies we have described should be generally applicable to any gene or genetic system added to the synthetic organism…we anticipate that the principles we have established may be applied to a broad range of organisms.”